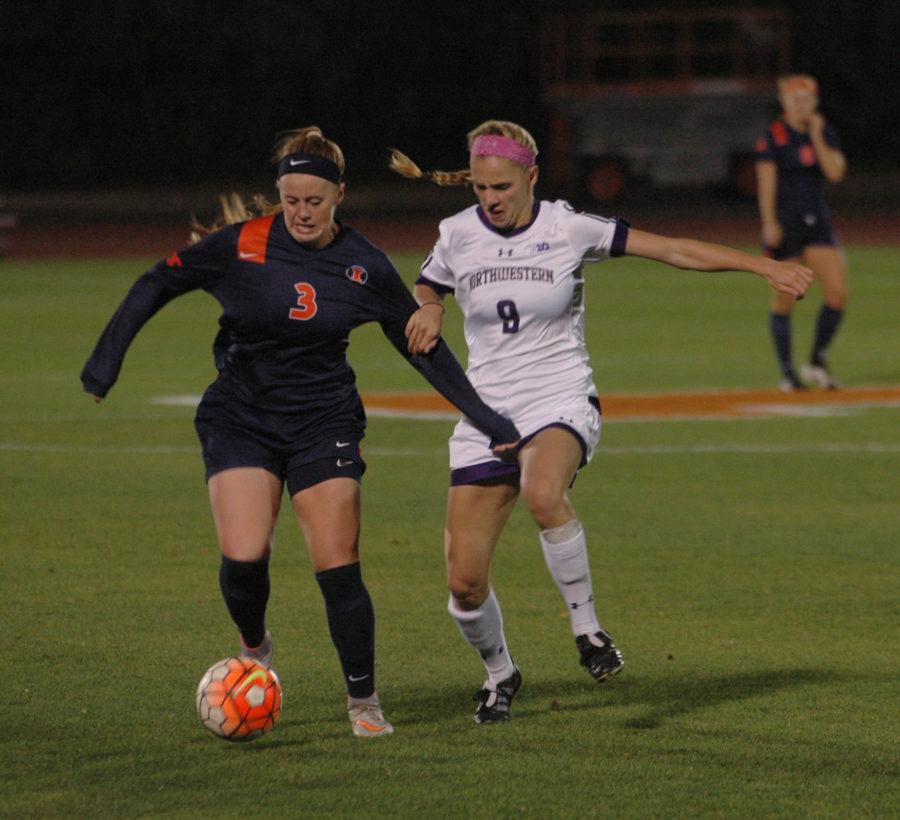 Jannelle Flaws, Nicole Breece, Aliina Weykamp and Anastasia Medellin were all honored for senior night before the Illini soccer game against Northwestern on Saturday. But it was the only celebrating the Illini would be doing all night.

The Illini failed to find the back of the net, losing 2-0 to the Wildcats.

Coming into the weekend matchup, Northwestern was limiting opponents to about 10 shots a game and averaging fewer than one goal allowed per game. Despite being shutout, Illinois mustered up 17 shots and had four corner kicks.

“We kept trying to flight the box and that’s kind of what they are good at in terms of when a ball is in the air,” Rayfield said. “We really needed to get the ball on the ground more and we’ve got to take better shots. We’ve got to get our shots on frame.”

Northwestern’s goalkeeper Lauren Clem recorded seven saves against the Illini, including a penalty shot taken by Flaws in the 78th minute. Flaws, Illinois’ career-goal scoring leader, shot toward the lower right side of the post and Clem guessed correctly.

Defensively, Rayfield said Illinois was not making the right decisions.

Northwestern’s first goal of the game came off a breakaway goal in the 25th minute. Illinois goaltender Claire Wheatley had no defensive help in the one-on-one breakaway situation. Wheatley finished the game with three saves and two goals allowed.

Rayfield said she would like to see the Illini make cleaner and better decisions in the future.

Illinois’ loss to Northwestern complicates the race for eighth place.

Had the Illini beaten the Wildcats, they would have had a better chance to secure eighth place in the Big Ten conference. The top eight teams in the conference qualify for the Big Ten tournament.

Michigan State is in eighth place with 14 points, Illinois is in ninth with 12 points, Nebraska is in 10th with 11 points and Purdue is in 11th place with 10 points.

Now, a few things need to happen for Illinois to qualify for the postseason tournament.

If Michigan State ties and Illinois wins, the Illini must win by at least four goals to have a greater goal-differential than the Spartans — goal-differential is the tiebreaker in the standings because the two teams tied this season.

“We’ve got to go to Minnesota on Wednesday, play the best we can, execute the way we are capable of, get a result and hope that’s enough,” Rayfield said. “We can’t control anything other than that right now and we probably will need some help to get into the Big Ten tournament.”