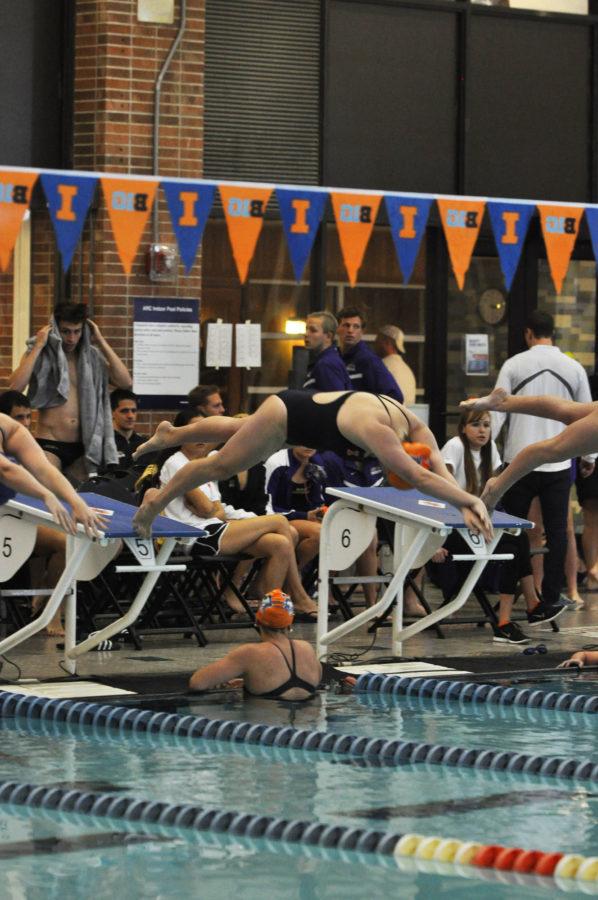 Amelia Schilling, junior, dives off the block for the 500 yard freestyle at the Fighting Illini Dual Meet Spectacular in the ARC Pool on October 16, 2015.

The Illinois swimming and diving team is off to its best start since the 2010-2011 season, starting off the season 4-0RB after a strong performance Friday in East Lansing, Michigan. Facing Big Ten rival Michigan State, Illinois looked dominant at times and defeated the Spartans 182-118RB.

Head coach Sue Novitsky set out a blueprint and her team executed, leaving the Charles McCaffree Pool with the Illini’s first conference victoryRB of the year.

“I felt we executed our details and race plans better than last week, and that showed up to be the difference when we were in some very tight races,” Novitsky said. “It is always tough to get a road win, and now we have to go back and continue to work.”

Road wins might be hard to come by, but it is something the Illini will have to get used to this season if they hope to continue their winning ways. Ten of their next 11 meets will be on the road, including coast-to-coast trips to California and FloridaRB.

Michigan State continued its rocky start to the season, dropping to 1-3 and 0-3RB in conference competition.

The event started quickly for the Illini, who won the first three eventsRB. The victories began with the senior foursome of Sloane McDermott, Isabella Schamber, Lori Lynn and Kirsten Zborek taking the 200 meter medley in one minute, 44 secondsRB. In the second event, junior Amelia Schilling took first place in the 1,000 freestyle with a time of 10:19RB.

Event three was the first of three event victories on the day for Samantha Stratford. The sophomore capped off the Illini trio of victories with a 1:50.94 time in the 200 freestyleRB. In addition, Stratford took the crown in the 200 meter breast and 200 IMRB.

Coming off last week’s five-victory performance, Stratford has been an integral part of the team early on in the season.

Freshman Megan Vuong finished with two victories on the day, giving her three individual event victories early on in her tenure at IllinoisRB. Vuong came away with victories in the 200 fly and the 100 freestyleRB.

On the diving front, junior Olivia Kassouni, who recently qualified for the NCAA Zone Diving ChampionshipsRB, improved on her three-meter diving score from a week ago, registering a 299.03.RB

The victory over the Spartans gives the Illini a 17-9 lead in the overall seriesRB, including victories in each of the last eight meetings.

Novitsky said she was proud of her team’s performance from beginning to end, and she knows that her team will continue to work hard and grow as competitors.

“We had talked about building true excellence and to be willing to fight and to take some risks,” Novitsky said.

Illinois returns home Friday for a meeting with in-state foe Northwestern in the annual Splash Bash. Both Illinois and Northwestern will go into the meet undefeatedRB, adding to an already competitive, tension-filled matchup.