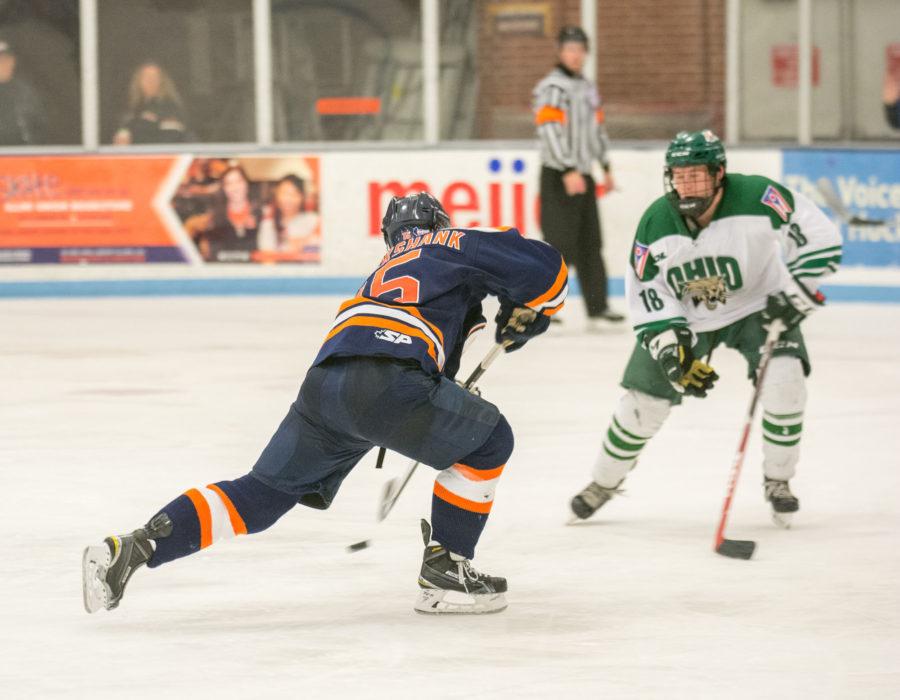 Illinois left wing Eric Cruickshank takes a shot during Saturday’s game against Ohio University at the Ice Arena. Cruickshank had both Illini goals during the game but missed his shootout attempt. Illinois lost in the shootout 2-3 but split the two game series 1-1.

Prior to last weekend, Illinois was a team still searching to justify its No. 13 ranking in the ACHA preseason poll.

However, when the puck dropped Friday night, the Illini silenced all doubt regarding their postseason potential: shutting out the Bobcats 2-0 in two-game series opener and ultimately losing 3-2 in a shootout Saturday.

“It wasn’t so much of a confidence-booster for us, it was a statement to the whole league,” junior defensemen Austin Zima said. “We knew already how talented we are regardless of being healthy or not, it was just a matter of proving it.”EJ

The key to the Illini’s success against Ohio in Friday’s win was their ability to withstand a flurry of shots on goal by the Bobcats and capitalizing on power play opportunities.

With just three seconds left in the first period, Shaunak Pal lit the lamp for the Orange and Blue off a power play resulting from an Ohio faceoff violation.

After a scoreless second period in which goalie Joe Olen defended 12 Ohio shots on goal — included one at point-blank range — Zima gave the Illini an insurance goal four minutes into the third just as a Bobcat player was released from the penalty box. EJ

In the 2-0 statement win, Olen defended 42 Bobcat shots on goal, recording the shutout and bringing his save total to 171 on the season EJ.

“He makes the tough saves look easy,” Zima said. “When we see him making those types of plays, we feed off that energy. He’s a tone-setter for our team.”

Cruickshank was the only Illini member to score a goal in regulation Saturday, tallying his first of the night with over a minute left in the first period.

After two Ohio power play goals, Illinois faced a 2-1 deficit nearing the final period. But a Bobcat cross-checking penalty allowed Cruickshank to go top-shelf off the point of the power play for his second goal of the night.

“Last year was a big stepping stone for me getting comfortable in my power play role,” Cruickshank said. “It’s been a very easy transition from last year to now playing the same position with more experience.”

After a scoreless third period and overtime, Jack Soneson took the ice for the Illini in the first round of the shootout, sneaking one past the OU goalie while Olen denied the Bobcats’ first-round try. EJ

However second and third round misses by Cruickshank and James Mcging and goals by two Ohio skaters gave the visiting team the ultimate 3-2 shootout win.

Although Illinois couldn’t add two to the win EJ, Illini members said only allowing two total goals over the weekend to one of the best teams in the ACHA was just as momentous for the team moving forward. Entering the time of year where every weekend has major standings implications, the Illini feel confident knowing they can play with anyone in the league and expect to make more noise in the ACHA once their roster is at full strength.

“I wouldn’t even say we have a chance to make a run this year because a run implies getting lucky,” Zima said. “We’ll have success because we choose to.”