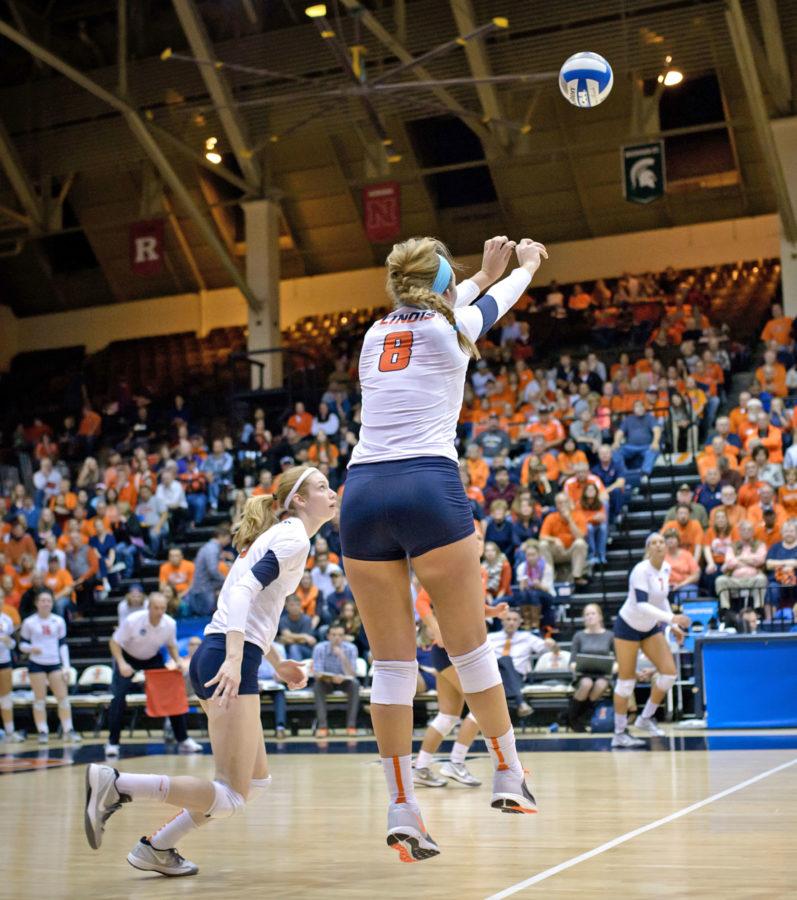 Illinois' Alexis Viliunas (8) sets the ball during the game versus Iowa State at Huff Hall on Friday, December 6, 2014.The Illini won 3-0.

The Illinois volleyball team put up a dominant sweep against Indiana on Friday.

After being down 20-11 in the first set, the Illini offense made a run to take the first set 27-25 and had little trouble the rest of the way.

Head coach Kevin Hambly said the team started putting pressure on the Hoosiers during its first set run, and Indiana struggled to get its confidence back the rest of the way. Illinois hit for .295 in the game, its best hit percentage since its sweep of Rutgers on Sept. 26.

Setter Alexis Viliunas, who relieved freshman Jordyn Poulter in the first set, said the team continued to fight despite the large deficit, which is something the team hasn’t been doing recent matches.

“We worked hard and never gave up in that first set,” Viliunas said. “I think that’s something that we lacked in the past. We showed more of it this weekend of just not backing down and continuing to go for it in those tough moments.”

“Blocking wise, she did what we wanted to and she was clobbering the ball,” Hambly said. “She executed out system the way we wanted to execute it.”

Middle blocker Katie Stadick and outside hitter Jocelynn Birks each added four blocks in the match. On the other side of the net, Purdue’s middle blockers Danielle Cuttino and Faye Adelaja contributed six blocks apiece.

Defensively, the Illini limited the Boilermakers to hitting percentages below .200 in four of the five sets. Hambly said the team’s offensive effort didn’t match its strong defensive performance, which ultimately lead to Purdue coming back to win the match.

Illinois sits on the edge of the top-25

Illinois has now lost six of its last eight and currently stand at No. 25, making it the only eight-loss team in the NCAA top-25 rankings.

Hambly said he is not used to being 4-6 in conference, but continues to keep perspective as the team moves into the last month of the regular season. The Illini will play five of their last eight regular season games at home.

Viliunas said the team played a lot of younger players early in the season who are continuing to mature and should make a significant impact in the team’s remaining games.

“I think the younger players did a really good job of playing with heart and fighting,” Viliunas said. “It didn’t work out for us (against Purdue), but I think we will continue to get better and better. I think by the end of the Big Ten, we will be really great.”