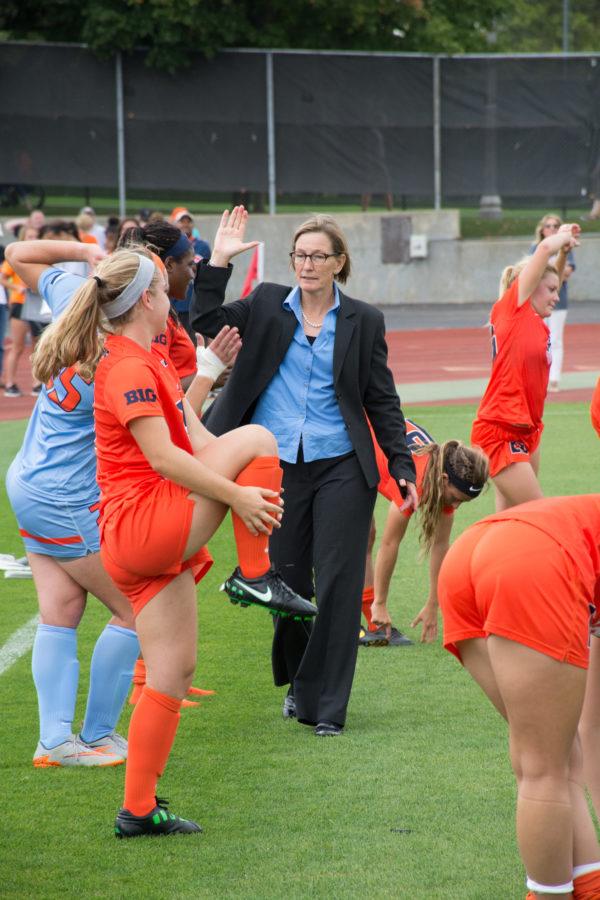 Coach Janet Rayfield congratulates her players after their 2-1 double overtime victory over Maryland at Illinois Soccer and Track Stadium on Thursday.

This Wednesday’s game has a familiar feeling to it for Janet Rayfield.

In the Illinois soccer head coach’s first year in 2002 with the Illini she faced Purdue for the final spot in the Big Ten tournament. The Illini beat the Boilermakers 3-2 in the final minute of regulation to advance to the conference tournament.

Although the Illini have not yet qualified for the Big Ten tournament, which starts on Nov. 1, Rayfield is treating this game as Illinois’ first postseason game. Like any postseason game, Rayfield said she knows a win is going to have to be earned by Illinois, especially against an opponent like Minnesota.

As well as the Gophers’ overall athleticism, Minnesota poses a defensive threat quite similar to Northwestern. On the season Minnesota is allowing 0.61 goals and 9.4 shots per game. Northwestern’s season averages are very similar. The Illini were shutout by the Wildcats 2-0 Saturday.

Scoring has been a bit of an issue lately for the Illini. Illinois has been shutout in two of its last three games, and its leading goal scorer, Jannelle Flaws, currently has nine goals. At this point a season ago, the forward had 17 goals.

But Rayfield isn’t concerned about that. She just wants her team to go out with nothing to lose on Wednesday.

“We’ve got to go to Minnesota on Wednesday, play the best we can, execute the way we are capable of, get a result, and hope that’s enough,” Rayfield said. “We can’t control anything other than that right now.”

The Illini control their own destiny.

Ohio State and Michigan State are tied for seventh place with 14 points. The two teams play each other on Wednesday. Illinois is currently in eighth place with 12 points.

Illinois needs to win on Wednesday in order to advance to the Big Ten tournament.

If Illinois wins and the Ohio State/Michigan State game results in anything but a tie, the final standings would have either the Buckeyes or the Spartans in seventh place with 17 points and Illinois in eighth place with 15 points. The top eight teams in the conference qualify for the Big Ten tournament.

An Illinois loss or tie on Wednesday eliminates the Illini from a spot in the conference tournament.

However, in this scenario Illinois would still advance. Because Illinois, Ohio State, and Michigan State would have all tied each other when they played in the regular season, the tie-breaker would be decided by how many points they have against mutual conference teams that are ranked the same or higher than them.

“We just have to perform on Wednesday,” Flaws said.