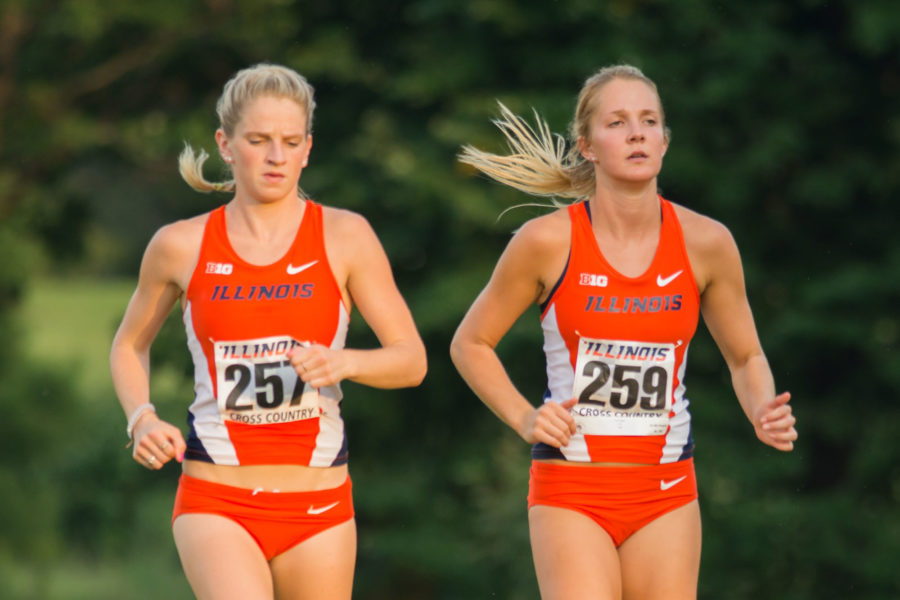 Britten Petrey(257) and Kim Seger(259) picking up the pace during warmups at the Illini Challenge 2015 at the Arboretum on September 4.

The Illini are hungry to improve on last year’s ninth place performance at the Big Ten Championships. Winter led the way for the team last year, finishing in 21 minutes and 8 seconds in Iowa City last year.

The race is set to begin at 11:45am on Sunday in Evanston, Illinoisbr.

Jones said he understands that his team will need prepare well for the weekend to sustain success in Evanston.

“We are primarily keeping our goals on more of the intrinsic nature,” Jones said. “Ultimately, we will succeed as a team because each individual competes up to their capabilities.”

Schneider is looking forward to getting back out on the course after missing the last two weeks for precautionary reasons.

“Coming back from really anything is always a little rough,” Schneider said. “But I can’t wait to run with everyone again.”

After a week of practice, Jones is confident that his runners, including Schneider, will not be rusty after last week.

“We ultimately decided for (the runners held out of the Illini Open) to keep it low-key,” Jones said. “We thought the recovery would be most beneficial for them.”

This meet will be different from the Illini’s recent appearance at Pre-Nationals, a clustered meet with lots of runners. On the first turn of the race, many runners tripped and fell, clogging up the race course.

Jones noted that his team had a light practice this week, aiming to avoid any injuries in order to enter the race at full health. Jones further noted that Bobart and Blazek have had productive practices this week, not showing any signs of rust before the much-anticipated meet.

After winning the Illini Open last week, Petrey was awarded Big Ten Women’s Cross-Country Athlete of the Week on Wednesdaybr. The senior said she hopes to use her performance from last week as momentum heading into the most important race of the season so far this year.

She emphasized getting proper amounts of sleep and for the team to be healthy as a whole going into the race.

“Being my last Big Tens, I wanted to use that as a confidence booster,” Petrey said. “I think we’re all feeling good.”