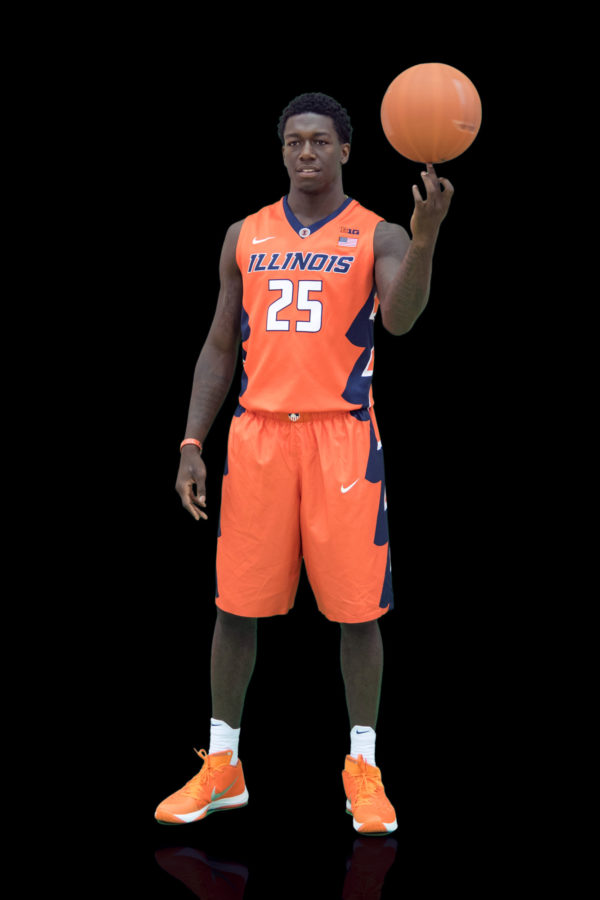 Not on the basketball court. On the ping-pong table.

After mounting a four-point comeback, Nunn takes the lead by one point. We’re playing overtime rules, win-by-two. He’s holding the paddle in his off-hand, because his left hand is in a cast due to a recent thumb injury.

“Game point,” he says. And then Nunn finishes the game like he finishes reverse lay-ups in traffic.

Nunn said he spent the offseason fine-tuning his jump shot and ball handling. He said he studied game film to figure out which moves could’ve worked better in certain situations. Nunn also emphasized the extra time he spent on strength and conditioning over the summer.

So it was a major blow when Nunn found out his thumb, which he injured during preseason practice, would require surgery to repair a ligament. He’s expected to miss at least the first month of the season.

The injury bug has hit the Illini hard as the team gears up for the season. Jalen Coleman-Lands suffered a stress fracture in his leg, Leron Black tore his meniscus and Tracy Abrams will miss the season with an Achilles injury.

But head coach John Groce said he isn’t too concerned about the rash of injuries plaguing the Illini. Players like Michael Finke, Aaron Jordan and Alex Austin will need to rise to the occasion.

“It’s the ‘next man up’ philosophy,” he said. “It means increased opportunities and reps for other guys. When that door opens for those guys, we want them to sprint through that door and knock that door down.”

Nunn’s thumb predicament is the most recent addition to the unfortunate collection of Illinois injuries. But Nunn said he’s been taking his medication, and the prognosis is good – his thumb is feeling better every day.

And when he finally hits the floor as expected mid-to-late December, Nunn will look to assert himself as an offensive force in the Big Ten. He averaged 11.1 points per game as a sophomore in 2014-2015, but according to Groce, he’ll be asked to carry even more of the load as an upperclassman.

“The four guys in the junior class have basically played in every game,” Groce said. “My standards for (the juniors) are a lot different than for the newcomers. I want them to set a bar that’s really, really high.”

Nunn dropped 20-plus points in four games last year, and he said he wants to become more consistent. “Sometimes I start the season off kind of slow, and then pick it up during Big Ten play and then towards the end of the season it dies down a little bit. So that’s one of my biggest goals. I just wanna stay consistent throughout all spurts of the season.”

He said he’s been getting advice from Rayvonte Rice, Illinois’ scoring leader last season at 16.5 per game, who now plays for Tezenis Verona in Italy’s Serie A2 league.

“Ray always told me that it’s kinda my team now, and I gotta bring that scoring, that offensive side to the game,” Nunn said. “He’s been telling me that since he’s been here, too.”

Rice isn’t the only former teammate Nunn looks to for words of wisdom. Nunn said he speaks with his old Simeon teammate, Jabari Parker, about once a week about basketball and life.

Though Nunn is a South Side, Chicago native and Bulls fan for life, he admitted that he instantly became a Milwaukee Bucks fan when they drafted Parker with the second overall pick in the 2014 NBA Draft. Nunn said he and Parker have had a strong bond since high school and Parker is “like a brother” to him.

Simeon was recently in the news, because the Nike brand basketball program added a gigantic LeBron James logo on the outside of the school building. Nunn said he didn’t know what to think of the move, pondered for a bit, then he came to a conclusion.

“I think that’s disrespect to my man D-Rose,” he said. “I don’t know if it should be there. But at the same time you can’t say that, because D. Rose is with Adidas and Simeon’s a Nike school. So I can see how that happened.”

Nunn is one of three Simeon Wolverines on the Illinois roster — along with fellow guards Jaylon Tate and D.J. Williams. Groce said Simeon players bring a different level of motor to the program.

“The biggest thing is they have a competitive toughness about them,” Groce said. “And they’re used to working. Winning is important to them. Competing – whether it’s a drill, a practice, or a game – is important to them … They get that maybe a little bit more than most. So they’re at an advantage with that.”

Groce added that the Simeon alumni are determined to represent the state of Illinois to the best of their abilities. “A lot of those guys take pride in playing at Illinois, for their state school, being from the city,” he said. “I know that’s important to Kendrick.”

The fourth-year Illinois coach also pinpointed Nunn and Malcolm Hill as vocal leaders for the upcoming season. It’s a transition that Nunn said hasn’t been the easiest.

“I wouldn’t say (becoming a vocal leader) was an easy challenge, but I’ve definitely been taking it as one of my things that I’ve been trying to get better at – having that energy level to the max during practice. Having guys more focused and getting ready to play.”

“Me and Malcolm, being upperclassmen, we’ve been here playing the most minutes, and we’ve definitely been taking the leadership roles,” Nunn said. “Getting guys to do things the right way and learn good habits.”

Off the court, one of Nunn’s favorite hobbies is sneaker collecting. He said lately, he’s gotten into designer kicks such as Balenciagas and Pradas. But he also owns a wide variety of sought-after Jordan Retros. Among his favorites are the IXs, IVs and the VIIIs, the latter of which he saves for special occasions.

“I kinda keep the VIIIs hidden. I don’t like to bring ‘em out too much,” Nunn said.

When he’s not at practice, doing schoolwork or figuring out which sneakers to rock, Nunn likes to unwind by listening to music. Drake, Future, Rick Ross, The Weeknd and PARTYNEXTDOOR are some of his favorite artists. His current go-to album is Drake and Future’s collaboration, “What A Time To Be Alive.”

Nunn is also likes to relax by playing video games including NBA 2K, FIFA and Madden.

And, of course, he’s always accepting challenges on the ping-pong table.