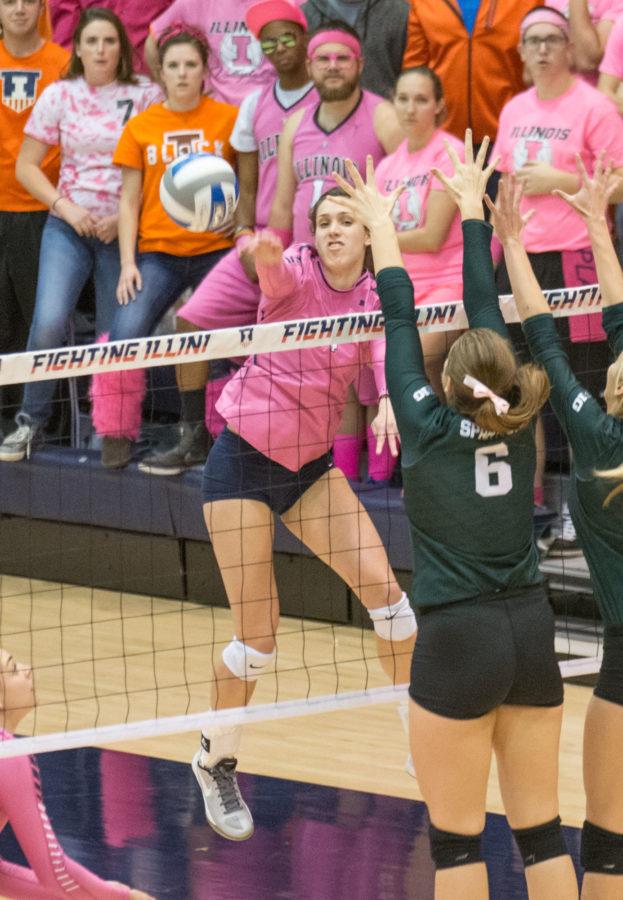 Michelle Strizak spikes the ball during the game against Michigan State at Huff Hall on Friday, Oct. 30. Illinois won 3-1.

This weekend, the No. 21 Illinois volleyball team accomplished a feat it hasn’t done since Sept. 26: win two consecutive matches.

Head coach Kevin Hambly said his team put up a strong defensive effort that stifled its opponents for the majority of the matches. The Illini limited both of their weekend opponents to fewer than .200 hitting percentage, and the team racked up 14 blocks against the Spartans.

Outside hitter Michelle Strizak added that Illinois’ defense complimented the team’s offensive play. The team strived to maintain a steady offensive performance and accomplished its goal for the most part. Illinois committed just 13 and 14 errors in its matches against Michigan State and Michigan, which by comparison compiled 26 and 19 errors, respectively.

“We were very much in control throughout the whole match with our motions and play,” Strizak said. “We were in control for the first time in a while.”

Against the Spartans, the Illini started out fast with a 7-0 run in the first set, a lead that they would sustain throughout the set. Michigan State responded in a back-and-forth second set, but Illinois closed the door on any chance of being upset in the third and fourth sets.

Outside hitter Jocelynn Birks led the team with 16 kills in the match and contributed two of Illinois’ six aces. She followed up on Saturday with 14 kills, enough for second-most on the team behind Strizak’s 15 kills.

Illinois started the match against Michigan at a much slower pace, which allowed for seven ties and three lead changes throughout the set. Illinois managed to close the set out on two kills by Strizak just as the Wolverines were on a 4-1 run.

In the second and third sets, Illinois hit for over .300 and allowed Michigan to take the lead just once the rest of the way.

“(Michigan’s) middles do a really god job of scoring when they were in system,” Birks said. “That was something that we were conscious of and working on throughout the match. I think our middles did a good job of slowing things down.”

Birks added that the team is showing a calm presence on the court that wasn’t on display in previous matches. And although Illinois is still not where it wants to be for the national tournament, she is optimistic about the progress the team can make over the course of the final eight regular season matches.

“We always have one more step,” Birks said. “This is just a start for us. December is still a whole month away, and that’s really when we need to be at our best, and we have all this time to get better.”