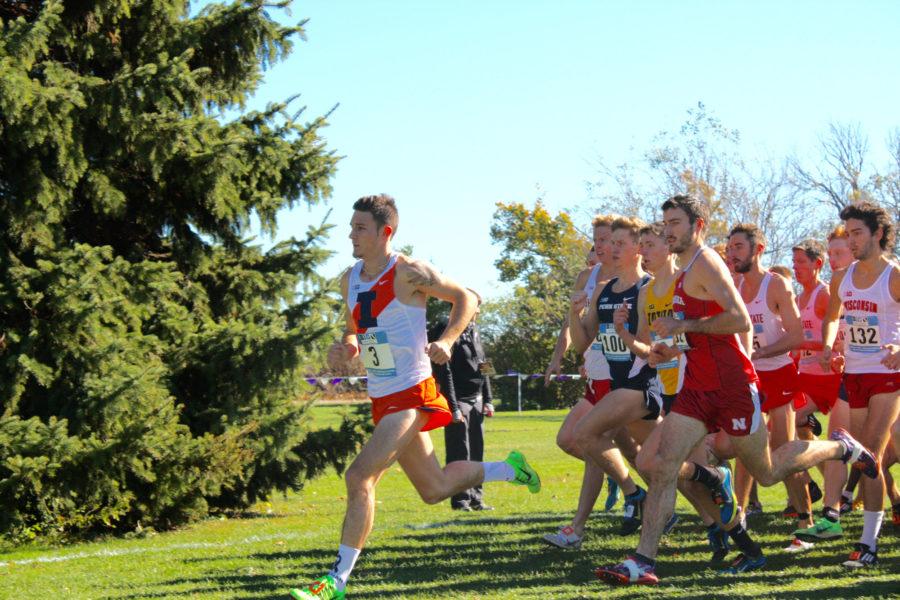 With just about a hundred meters left in the race, freshman Dan Lathrop kicked into a higher gear and started accelerating towards the finish line.

With just about every other stride he passed his opponents, eventually crossing the Big Ten Championship finish line in 20th, helping the Illinois men’s cross country team take second place in the conference championship meet in Evanston, Illinois.

Lathrop’s kick was not only a crucial part of the Illini’s second-place finish but a microcosm of their season as a whole.

For months, the Illini strung together solid performances but never delivered a true signature moment.

Just as they were getting to the part of the season that mattered the most, the Illini kicked into overdrive, and that pleased head coach Jake Stewart.

“We ran the way we’ve been capable of running all year,” Stewart said. “I truly felt that this was a performance coming, and the guys just went out and did it.”

While many Illini delivered strong performances, the team’s success wouldn’t have been the same without Dylan Lafond. After coming out and leading the pack for the first kilometer, Lafond started to fall behind, and it looked like Wisconsin standout Malachy Schrobilgen would lead the rest of the race, but about halfway through Schrobilgen started to break down, and he took the Badgers chances of defending their 2014 conference title right with him.

At that point, Lafond found himself in a tightly contested three-man race for first. On the final lap, Lafond fell off slightly from eventual champion Matt McClintock of Purdue and runner-up Mason Ferlic of Michigan, but still comfortably held third, where he would sit for the remainder of the race.

“With 2,000 meters left, it was comfortably hard at that point,” Lafond said “I kept telling myself I belong up here and I’ve got to hang on.”

The junior finished the race in 23 minutes and 22 seconds.

While Lafond’s performance may have been the most critical, the member of the Illini who stepped up the most on the big stage was on of their youngest members.

Jesse Reiser’s 11th place finish made him the second-most important runner for Illinois, a jump for the freshman who, as recently as a couple of months ago, was having difficulty adjusting to the college distance of 8,000 meters.

Now with the pressure on, Reiser and Lathrop finished the best of any freshman in the conference.

“My first race tested me a lot,” Reiser said. “After that race I felt awful, I didn’t know about an 8K. Now thanks to Coach Stewart and the team, my confidence level has grown greatly.”

Regionals still loom ahead for the Illini, where they will find themselves up against top teams like Michigan, Oklahoma State and Tulsa.

Additionally, for the first time this season, the Illini will race in a 10,000-meter race, which might present problems for a relatively young roster.