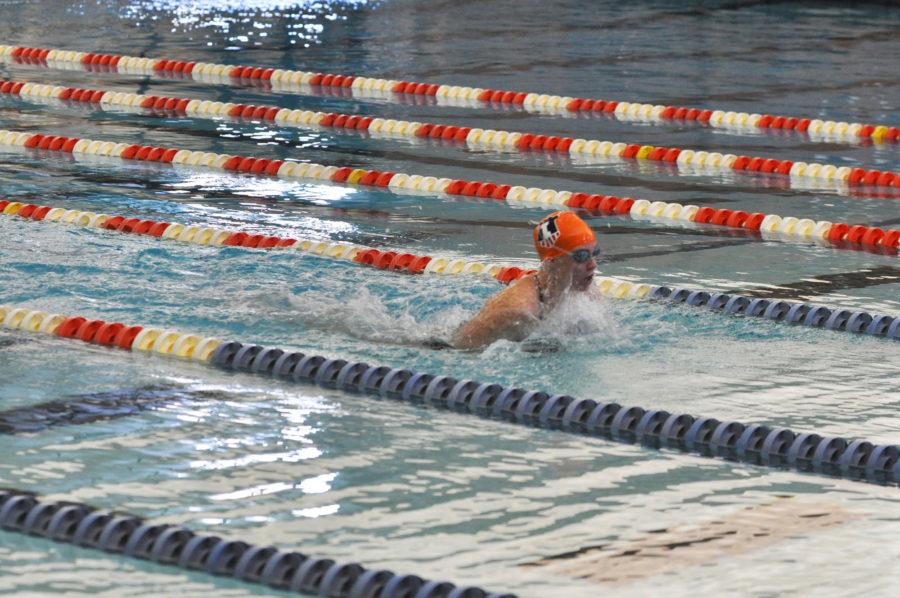 Hollie Smith, senior, swims the 50 yard breaststroke at the Fighting Illini Dual Meet Spectacular in the ARC Pool on October 16, 2015.

While the average Illinois student spent their Saturday participating in costumed events, the swimming and diving team had something else on its mind: Getting off to its best start in five years.

Illinois exited the weekend 2-1, losing Friday’s tilt to Northwestern and rebounding the next day by defeating SIU and ISU in a double-dual meet.

The Illini (6-1) kept Friday’s meet competitive, but ultimately fell to the Wildcats 173-127 to conclude their home slate. Illinois is the first team to score over 100 points against the Wildcats this season.

Head coach Sue Novitsky touched on the close, competitive nature of the meet.

“From the very first race you could tell it was going to be a close meet all the way through,” Novitsky said. “In the first race, we fought our way back into it and just got touched out at the end. Both teams were under the pool record, so that set up what was going to happen for the rest of the meet and it just came down to execution.”

Illinois was led by sophomore Samantha Stratford, who captured three event wins. Leaving Friday’s meet, Stratford has finished first in all 10 of her individual races this season.

Novitsky noted how Stratford’s improved conditioning and strong work ethic has led to such a strong start to the season.

“She comes in and goes about her business, putting together some really strong practices,” Novitsky said. “Sam’s gotten a lot stronger in the weight room and she’s in good shape. She’s got that confidence along with that year of experience under her belt.”

Illinois edged the Salukis 166-134 in SIU’s only home meet of the season. Illinois kept the momentum rolling, defeating the Redbirds 208-91 to cap off its Saturday in Carbondale, Illinois.

Novitsky didn’t let the loss to Northwestern dishearten her team, encouraging her swimmers to stay strong and focused.

“This was a good showing for the team on the day,” Novitsky said Saturday. “Being able to rebound from a very physically and emotionally challenging Northwestern meet last night was a great result to see from the team. We talked about some choices you can make when you encounter difficulties: letting your troubles deflate you, defeat you or define you.”

On the diving front, junior Olivia Kassouni picked up a pair of second-place finishes. Kassouni turned in a mark of 243.05 in the one-meter dive and a 271.20 on the three-meter dive.

Illinois has a short break before taking a 19-hour bus ride to Miami for its meet against Florida International University on Nov. 6. FIU has a record of 5-0, with three of those wins coming at home.