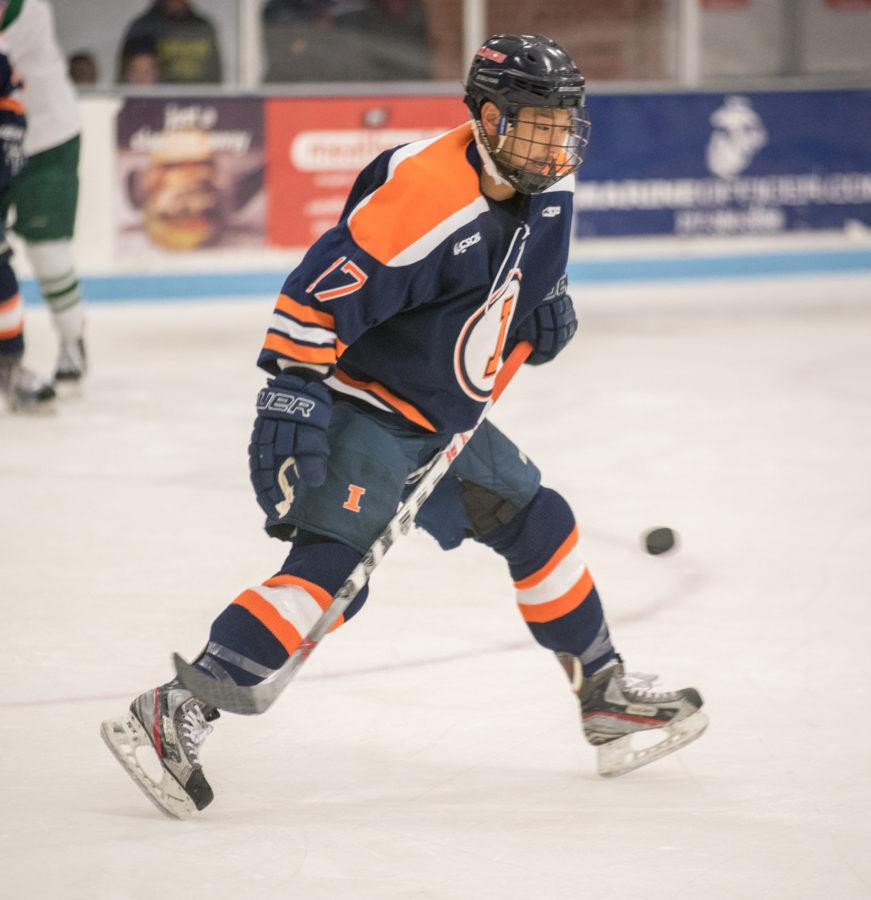 Tadayoshi Shibata stretches to block a shot during the game against Ohio University at the Ice Arena on Friday, Oct. 23. Illinois won 2-0.

During Friday’s game between Illinois and Illinois State, a player from both sides got disqualified from playing in Saturday’s game for fighting.

Illinois’s Yoshi ShibataCC and Illinois State’s Luke MorinCC scrapped in the corner after a boarding call on Illinois State. Head coach Nick FabbriniCC was not happy when Shibata got disqualified.

“(Shibata) chipped the puck around the guy, and then (Morin) tackled him by the head,” Fabbrini said. “After Shibata stood up, (Illinois State goalie Joey GarapoloCC) came and crossed checked in the face. (Morin) punched (Shibata) in the face four times before he defended himself. After he defended himself, the ref decided that he deserved a disqualification for fighting.

I thought it was ridiculous.”

Morin also received a disqualification, but Garapolo did not.

Fabbrini did not understand why Shibata got disqualified, but Garapolo did not, since Shibata did not retaliate until after Garapola got invoved.

Even though he did not get disqualified, Garapolo did not play in Saturdays game.

The Illinois hockey team has split its last three weekend series, two of which were against conference opponents.

Sitting at a conference record of 2-1-1 and an overall record 6-2-2, the Illini are tied with Iowa State for third in the CSCHL — each team has seven points. Lindenwood leads the conference with 11 points, and Ohio is in second with eight.

Both Ohio and Lindenwood have played two more conference games than the rest of the conference, and Fabbrini said he is content with where the Illini sit.

“I think we have had a good start to CSCHL play,” Fabbrini said. “We split with two good teams in Ohio and Robert Morris. But I know what we are not necessarily happy about is the fact that we are giving up points at home.”

The conference champ would have bragging rights and an automatic bid to nationals. According to Fabbrini, the automatic bid does not matter, because whatever team wins the CSCHL will probably get a top-five seed in the tournament.

The last time the Illini won the CSCHL regular season title was in 2013.

Illinois suffered several injuries this weekend against Illinois State, which just stack on the others that the team has built up this season.

The Illini have been playing without team captain John OlenCC, who broke his leg in the game against Alabama back on Oct. 3, and sophomore forward Mike FisherCC, who has been out with a broken collarbone since the first weekend of the season.

This weekend against Illinois State, both left wing James McGingCC and defenseman Joseph RitondaleCC did not play in Saturday’s game. Ritondale took a hit on Friday and tested positive for a concussion, and McGing hurt his finger and received an X-ray Tuesday morning. Fabbrini is waiting to receive the results from Mcging. He did not know when Ritondale would be ready to return.

Mcging leads the team with 16 points. He has 14 assists on the season — nobody else on the team has more than five.

On Saturday, right wing Kyle VarzinoCC aggravated a lingering knee injury that he has had all season. Fabbrini said that he is hoping that it is nothing serious. Center Josh BelmontCC took a shot up high in Saturday’s game and will be reevaluated.