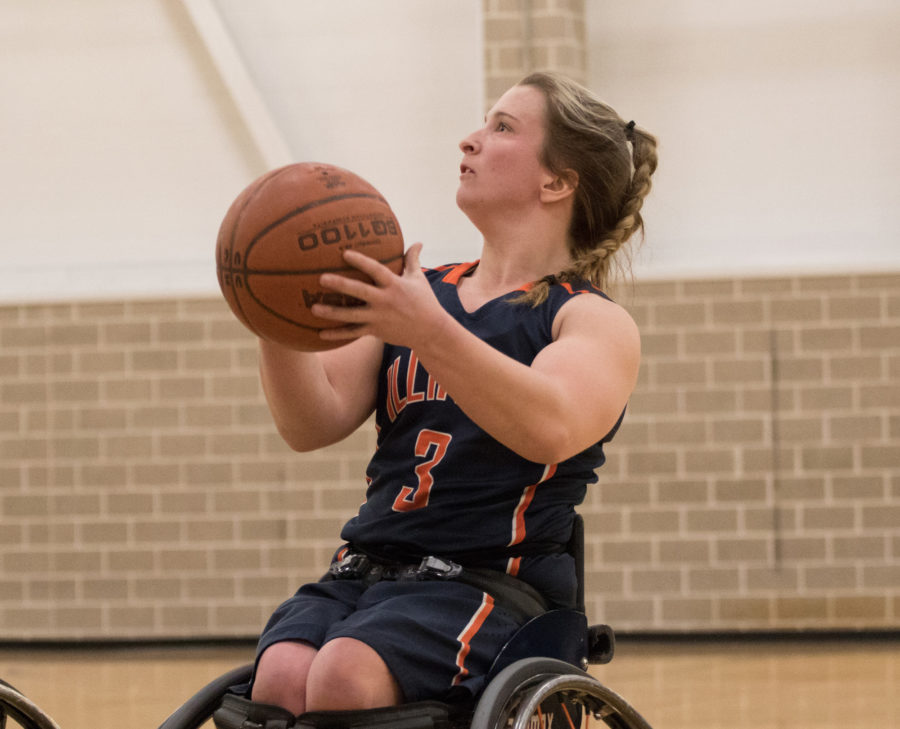 Illinois' Gail Gaeng readies for a shot during the wheelchair basketball game against Wisconsin-Whitewater at the ARC on Feb. 13. Gaeng is one of two Illini — the other is Megan Blunk — who qualified for the 2016 Rio Paralympics with Team USA.

Over the weekend, the Illinois women’s wheelchair basketball team took part in its first tournament of the season. The Illini traveled to Toronto to participate in the Wheelchair Basketball Academy’s annual tournament.

It was a three-team tournament that included the Illini, Canadian Academy team and the Canada Red Aces. Each team faced each other team twice over the weekend.

The Illini went 1-1 against each opponent.

In game one Friday, the Illini defeated the Canadian Academy team 56-41. Senior Gail GaengCC led the way for Illinois, recording a triple-double by tallying 18 points, 10 assists and 13 rebounds. Gaeng also had a team-high and led the team in minutes with 40.

Game two brought a similar result. The Illini squared up against the Canada Red Aces and pulled out its second victory, 66-38. Gaeng had another strong game for the Illini, recording 25 points, eight rebounds and nine assists again in 40 minutes. At one point in the game, the Illini held a 37-point lead.

The Illini were defeated for the first time in their third game. Facing the Canadian Academy team for the second time, Illinois fell 66-51. The Illini were outrebounded 30-23 and didn’t score any points off of turnovers.

In its final game of the weekend, Illinois lost its second straight game (67-54). Outside of two players — Gaeng and Megan Blunk — Illinois could not get the offense going. Gaeng and Blunk combined for 45 of the Illini’s 54 total points.

Through four games this season, Gaeng has played 160 minutes, scroed 85 points, grabbed 32 rebounds and has 31 assists.