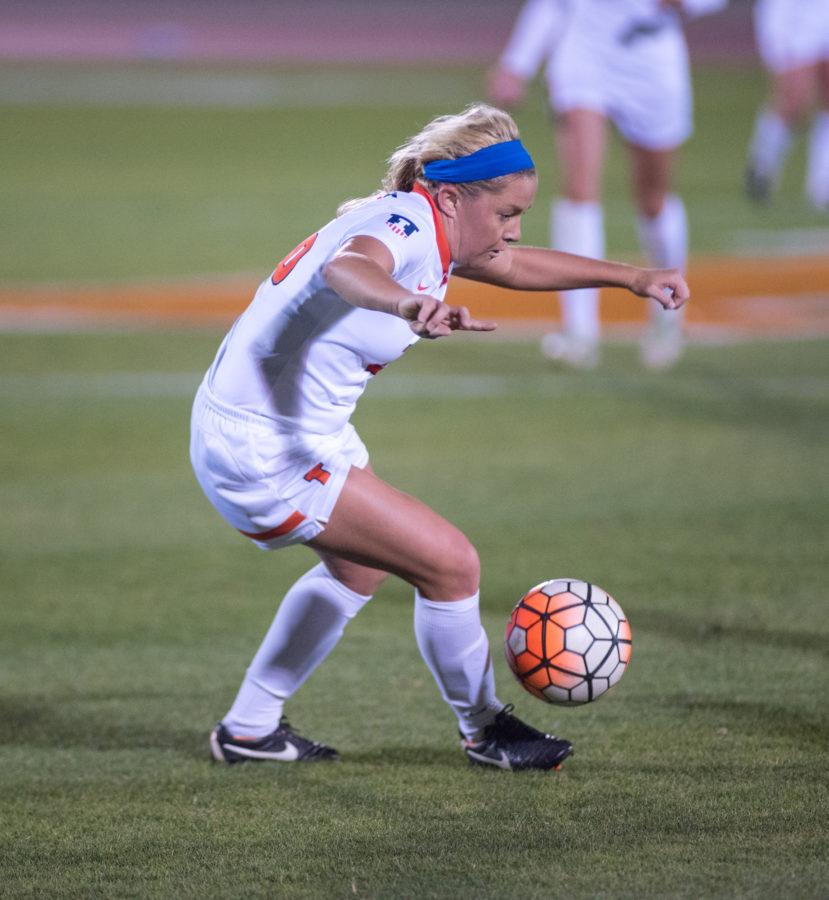 Katie Murray tries to dribble around a defender during the game against Iowa at Illinois Soccer and Track Stadium on Thursday, October 15. Illinois lost 0-1.

The Illini soccer team was well off its average of shot attempts in the first period off Sunday’s 3-1 loss to Penn State.SO

Illinois (10-6-3) averages a little over six shots in the first half of games this season. SOIn the opening 45 minutes Sunday, Illinois recorded one shot and it wasn’t on net. Penn State recorded 15 shots in that timeframe.

The Illini are 1-4-1 when they are outshot in the first period.

Head coach Janet Rayfield claims the windy conditions Sunday played a major factor in Illinois’ lack of shot attempts in the fist half.

“The wind was pretty strong in that first half,” Rayfield said. “It made it really difficult for us to get out of our end. It allowed them to get members forward and really allowed them to keep us locked in.”

Illinois outshot Penn State 8-4 in the second half and outscored the Nittany Lions 1-0. SOBut Penn State had already done its damage in the first half, scoring all three of its goals.

The Illini might have been eliminated from the Big Ten Tournament, but they will continue practicing in hopes that their season will continue on Nov. 13 — the first round of the NCAA Tournament.

Sixty-four teams are invited to the NCAA Tournament and there is a chance Illinois could be invited as an at-large bid. As of Nov. 2, Illinois was ranked No. 54 in the RPI. The RPI measures a team’s wins and losses and factors in strength of schedule.SO

Rayfield is confident that her team’s resume is strong enough for an NCAA Tournament bid.

“There’s so many things that will come into play,” Rayfield said. “We’re going to prepare as if we are in because that is certainly a possibility.”

There are eight Big Ten teams ahead of Illinois in the RPI rankings. The Illini have played seven of the eight conference opponents ahead of them. Against those seven teams Illinois has a record of 3-2-2.

“It was a quality Big Ten schedule,” Rayfield said. “So we are going to do our part to prepare as if that’s going to happen and we’ll see how things play out.”

With the Illini eliminated from the Big Ten Tournament, some interesting stats have emerged.

This has been a tough year for Illini forward Jannelle Flaws. Illinois’ career goal-scoring leader has been battling a foot injury throughout the season. Has her workload had an impact on her performance?

Illinois’ record was 3-3-1 when Flaws played 90 minutes or more. In those games Flaws has a total of two goals and two assists. When she played fewer than 90 minutes, she has scored nine goals and recorded four assists and Illinois is 7-3-2.SO

The Illini only played games on Sundays, Wednesdays, Thursdays, Fridays and Saturdays. Was there a day Illinois played best on?

Illinois played all five of its freshmen this season. After a few injuries, the Illini looked upon the freshmen to step up. How impactful were they?

The only freshman to generate any points was Katie Murray, who scored two goals this season.SO