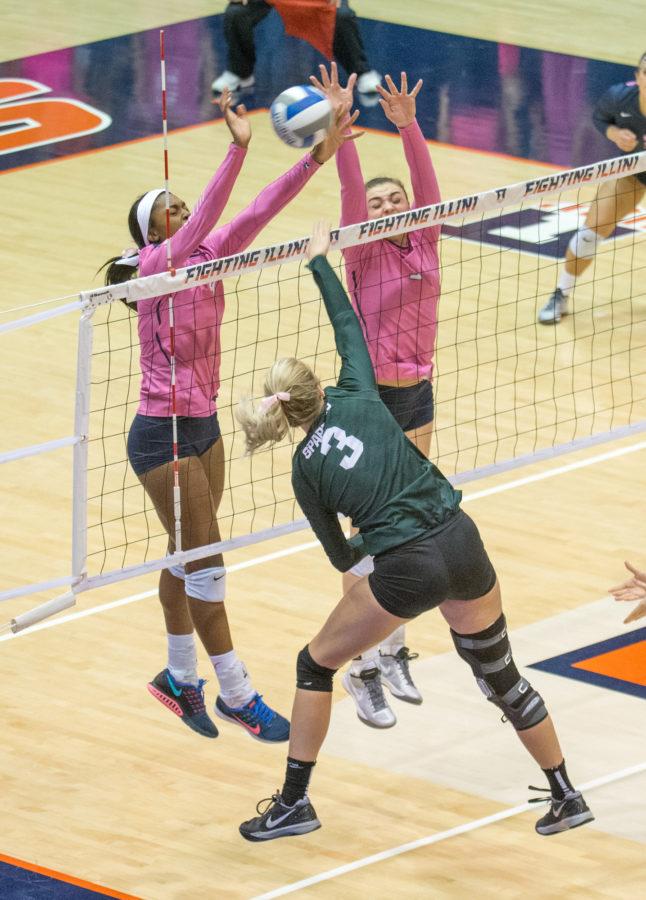 (left) Naya Crittenden and (right) Ali Bastianelli jump to block and attack during the game against Michigan State at Huff Hall on Friday, Oct. 30. Illinois won 3-1.

After being subbed in early in both of last week’s matches, senior Alexis Viliunas was given the starting setter role in Illinois volleyball’s two weekend wins.

Viliunas recorded respective assist totals of 41 and 35 against Michigan State and Michigan. She also contributed 17 digsSO.

Head coach Kevin Hambly said although Viliunas wasn’t setting the middles as well as freshman Jordyn Poulter was, the team’s energy is better with her on the court. He credited Viliunas’s eight-year connection with outside hitter Jocelynn Birks as a factor in the Illini’s steadier play. Viliunas and Birks went to Lyons Township High School together.SO

Outside hitter Michelle Strizak added that the team’s veterans have grown accustomed to Vilunas’s passes and her style of play. Strizak and Birks led the team in total kills this weekend.SO

“Alexis does a great job of contributing to a positive energy and a determination to win,” Strizak said. “A lot of us are really used to playing with her. We know how she works, and we feed off each other a lot.”

Middle blocker Ali Bastianelli had a breakout performance against Michigan State on Friday, recording a career high nine blocks and five kills. The freshman followed up Friday’s match with a five-block outing against the Wolverines on Saturday.SO

Bastianelli was awarded the Big Ten’s Co-Defensive player and Freshman of the week honors for her play.SO It was the first time she earned both of the titles.

Hambly said that she and opposite hitter Naya Crittenden have developed a defensive rapport that will remain for years to come. Crittenden led Illinois with six blocks Saturday and her 13 kills were the second-most on the team.SO

With the two weekend wins, Illinois moves into seventh place in the Big Ten standings, tied with the two teams the Illini beat over the weekend: Michigan State and Michigan.SO

Of the Illini’s eight remaining matches in the regular season, five will be against opponents that either have a losing or the team has already defeated.

Hambly said that the team is in a must-win situation moving forward in the regular season, and it will be looking to capitalize on the momentum the team has built in the last two matches.

“I think at home, you have to take care of work, and we haven’t been doing that,” Hambly said. “We need to get a couple more sweeps to make sure we are in the tournament. I think because of our RPI and if we can get a couple of more big wins, we might have a shot at hosting. It might be a long shot right now, but we are going to fight for it.”