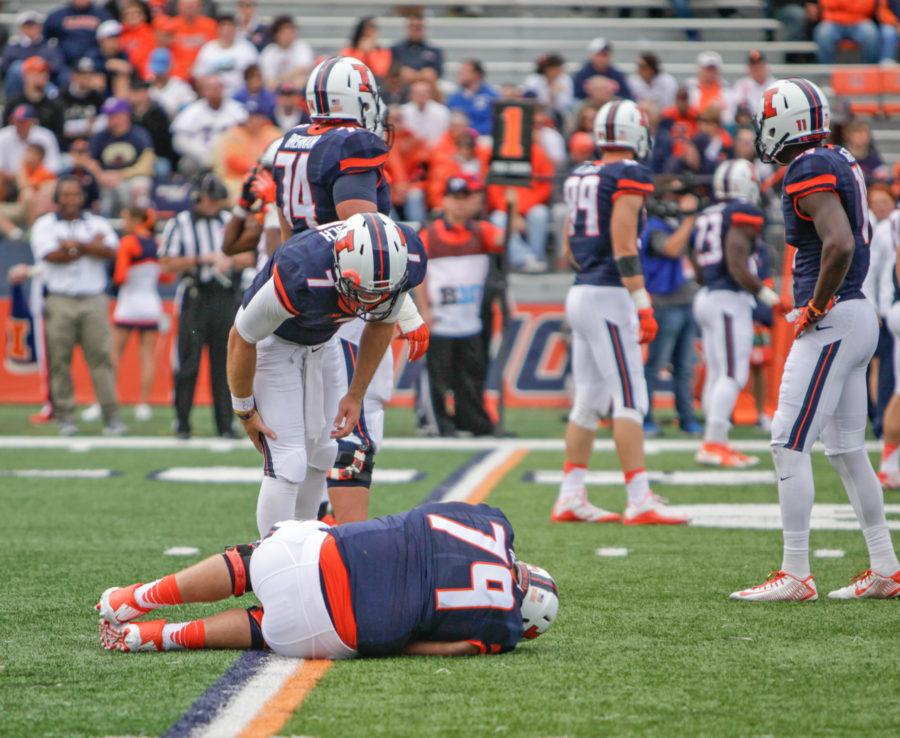 Back up quarterback Chayce Crouch leans down to check on injured lineman Zach Heath during the game against Western Illinois at Memorial Stadium on Saturday, Sept. 12.

His offense has been depleted of players for much of the season, and Saturday’s shutout was yet another reminder of the void those injured stars have created. Cubit joked that he might look to the waiver wire to see if he could pick up some players for his roster.

After he listed the names of his injured players, he quipped, “Somebody up there doesn’t like me.”

Injuries to key offensive players like Mike Dudek, Justin Hardee, Josh Ferguson and Tyler White have diminished what Cubit can do with his offense. Wide receiver Geronimo Allison has been quarterback Wes Lunt’s main target — Allison leads the Big Ten in receptions — but defenses have caught on and limited his impact.

The wide receivers who have played haven’t made the impact Cubit wants from the group. The unit has dropped 46 passes according to the head coach, a number that exceeded last season’s total after a few weeks.

Cubit has tried to adjust to his young receivers’ abilities, but there is only so much the head coach can do besides using the JUGS machine in practice and limiting the playbook.

“We’ve simplified it as much as it can be simplified,” Lunt said. “I think we have to the young guys and receivers can’t rely on G-Mo (Allison) every play, so we just have to get those guys going and keep fighting.”

Despite the negatives surrounding the offense, Cubit wants to remain positive and knows he and his coaching staff must do so if they want the players to respond. Players like Dudek and Hardee aren’t coming back this season to save the day, so the head coach knows it’s time for the rest of the players to step up.

“We’ll just keep on trying to find ways,” Cubit said. “It’s all you can do. For me to be negative makes no sense at all.”