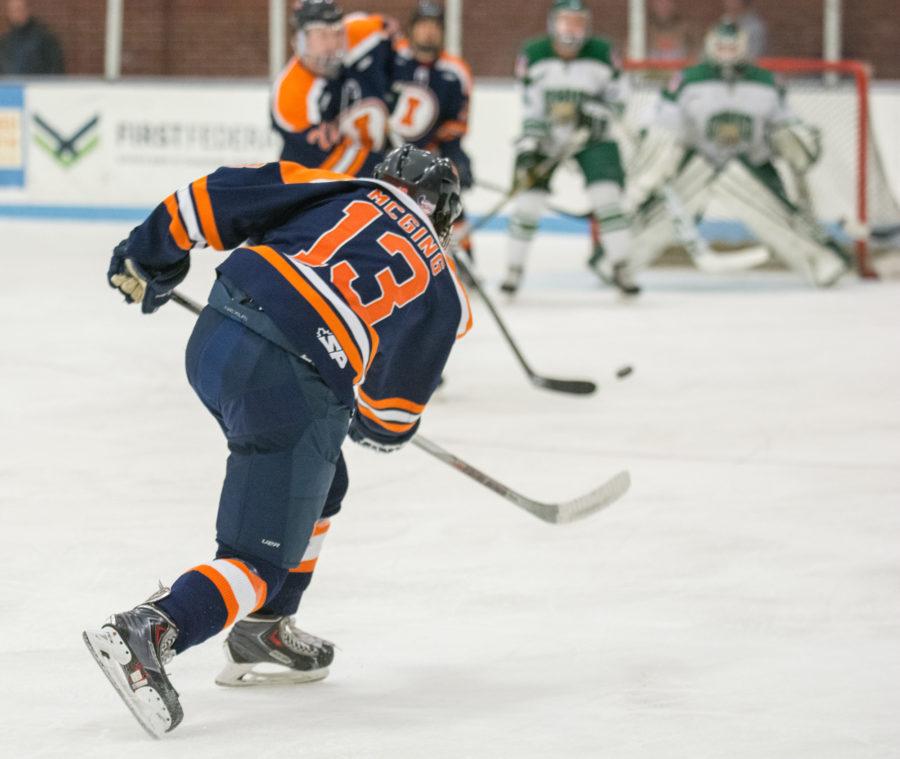 James Mcging shoots the puck during the game against Ohio University at the Ice Arena on Saturday, Oct. 24. Illinois lost 2-3 in a shootout.

His 14 assists are good for second in the CSCHL. He trails only Aaron Azevedo from Iowa State, who has 16. Last season, as a freshman, McGing led the team with 21 assists, and finished third on the team in points with 30. Forwards John Olen (34) and Cruickshank (32) were the only two players ahead of him, points-wise.

If the left wing plays in 37 games like he did last year, then he is on pace to finish this season with 47 assists.

McGing is a pass-first player, and he always has been.

“It’s almost a problem in some ways,” McGing said. “I just always choose to pass, even if it is the wrong play. If I have the shot, I will always pass. But it’s easy when I play with a guy like Cruickshank. I’d rather have him shoot every time because he is just better at it.”

McGing doesn’t know exactly why he always decides to pass first, but he thinks it may have to do with a position change back in his youth hockey days. He did not start playing forward until he was 15. Before then, he played as a defender. He thinks the reason he doesn’t focus on scoring goals is because he never had to during his developmental years.

Head coach Nick Fabbrini is more than pleased with how McGing has been playing, but due to recent injuries, he is expecting more production from his left wing.

“He is a great passer and playmaker,” Fabbrini said. “But he can also score goals. He has a great shot. We as a coaching staff are always on him about taking opportunities to shoot the puck when he gets them. Especially with (John Olen) out, we need him to score goals for us, too.”

McGing likes to slow the game down. If he is ahead of his teammates, instead of pressing the issue and taking a shot, he will slam on the brakes and wait for his teammates to catch up. Then he will make his move.

Fabbrini said that a lot of McGing’s success is a product of strong powerplay offense.

“He is in a good spot on our power play where he is handling the puck a lot,” Fabbrini said. “It also comes from the guys he is playing with. You need somebody on the other end scoring the goal in order to get an assist.”

McGing has recorded eight of his 14 assists during Illini power plays. Nobody else has more than two.

His spot on the power play has definitely helped his numbers, according to McGing, but he feels more comfortable in all offensive aspects this season. It did not take him long to adjust to playing at Illinois last year, and he credits Olen and Cruickshank for that.

“Cruickshank and Olen made it so easy,” McGing said. “I played pretty high-level junior hockey, and I still have never played with guys that are able to get a shot off like they can. No matter what position they are in, or where their feet are at, they will get that shot off. It makes my job so much easier.”