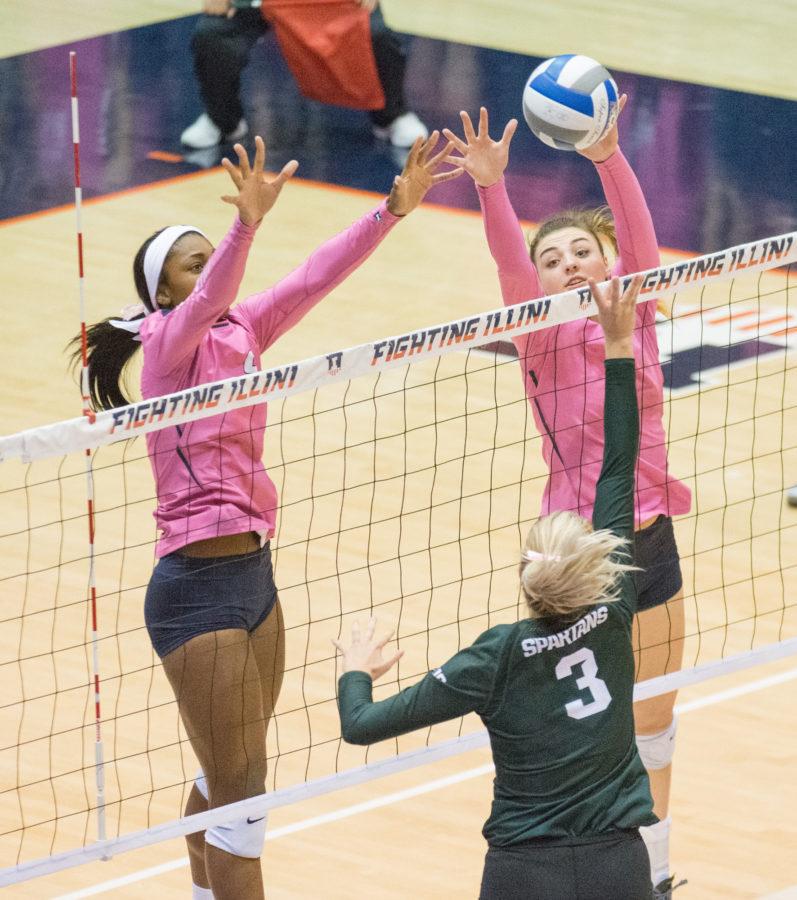 (left) Naya Crittenden and (right) Ali Bastianelli jump to block and attack during the game against Michigan State at Huff Hall on Friday, Oct. 30. Illinois won 3-1.

Freshman Ali Bastianelli is a 6-foot-3, tough-as-nails middle blocker who leads the Illinois volleyball team with 98 blocks on the season.

The source of Bastianelli’s toughness behind the net may come as a surprise. She’s a black belt in Karate.

The Marysville, Michigan native participated in martial arts for seven years before realizing volleyball was her true passion. Bastianelli said her freshman year at Marysville High School, when she began playing National Club Volleyball, is when she knew she wanted to play the sport in college.

College coaches began to take notice of Bastianelli’s speed and court awareness. One of those coaches was from the University of Illinois, a man by the name of Kevin Hambly.

“I saw (her talent) in high school. I watched her make three moves, and I was like ‘I want her.’ She was the only middle I wanted in that class,” Hambly said. “I’ve always felt like we’re just trying to find players who can block the way that she blocks. Same thing with Katie Stadick when she was a freshman and I saw her, and Anna Dorn when she was a freshman.”

Four years later, Bastianelli is coming into her own as a starting middle blocker on the No. 18 program in the country. After tallying a team-high 14 combined blocks in wins over Michigan State and Michigan over the weekend, Bastianelli earned Big Ten Freshman of the Week and Co-Defensive Player of the Week honors.

Bastianelli said it felt good to be recognized for her hard work and that the accolades were a “nice surprise.” But the young gun was quick to credit her teammates for playing up to par, as well.

“I’m a team player, and it really was a team effort,” Bastianelli said. “Defensive-wise, without our tough serving, it would’ve been hard to block and do the things I did.”

“She has really adjusted to the college level, and I can’t wait to see how much better she gets in these last few weeks of the season,” Viliunas said. “She brings a lot of energy to the team and a lot of fight that our team has been looking for throughout the season.”

Throughout the first half of the season, Bastianelli had trouble adjusting to the college level. But Bastianelli is starting to turn the corner; she’s had more blocks over the past three matches than in any other three-match span this year. And Hambly approves of her play.

“She’s gotten better at attacking. Things are starting to click for her,” Hambly said. “(Early on), we were frustrated at times with her development … I think it’s a combination of the training and her really understanding what’s required. I think it just took her a while to learn and figure out what we were looking for.”

Hambly knew what he was looking for four years ago, when Bastianelli was a 14-year-old sensation in Michigan. Bastianelli went on to lead her club team to a first-place finish at AAU Nationals in 2013 and was then selected to the Under Armour All-American in 2014 – her two favorite volleyball accomplishments.

She played against freshman setter and current teammate Jordyn Poulter in the Under Armour All-American game. Bastianelli said she definitely prefers having Poulter on her team and not on the opposite side.

Prior to teaming up with Poulter, Bastianelli was deciding between Michigan, Stanford and Illinois before eventually choosing Hambly’s program.

Early on in the recruiting process, the veteran head coach noticed nuances in Bastianelli’s game, including her suddenness and her volleyball IQ, which set her apart from other middle blockers.

“(The best players) have some quality about ‘em that’s different, and she’s definitely one of those. I would say that out of all the kids we’ve had, better things happen when the balls hit her hands than most players that we’ve had,” Hambly said. “Ali Bastianelli, for the most part, when she touches it, a good thing happens. Some kids aren’t that way.

Bastianelli’s family is full of athletes. Her biggest inspiration has been her sister, Samantha, who played volleyball at Oakland Community College from 2012 to 2013.

Her father Gregory played football at Northwood University from 1987 to 1988 in Michigan, her mother Joan played volleyball and basketball at Northwood from 1985 to 1989 and her cousin Kimberly played ice hockey at Ohio State from 2008 to 2013.

As for Bastianelli, it appears she’s found her athletic niche. That is unless, of course, she decides to quit the team and join one of Illinois’ seven martial arts clubs.