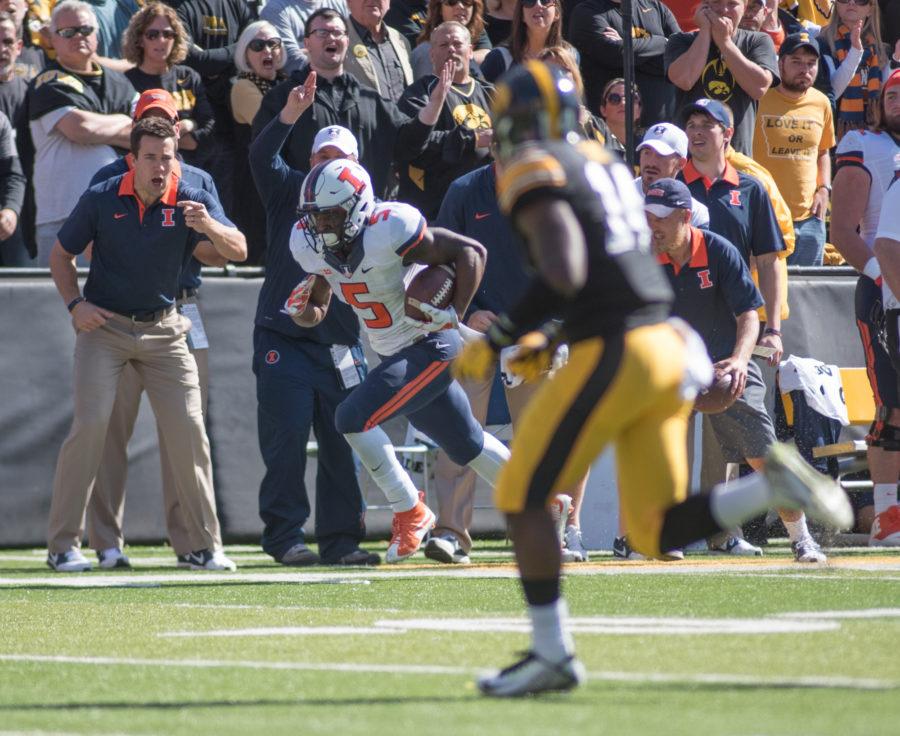 Running back Ke’Shawn Vaughn makes a run down the sideline during the game against Iowa at Kinnick Stadium in Iowa City on Saturday, October 10. Illinois lost 20-29.

Illinois’ football game at Purdue on Saturday is important for many different reasons.

The Illini need to win two of their four remaining games to become bowl eligible and Saturday’s game against the Boilermakers will be a good opportunity for Illinois to gain one of those wins. Bowl-eligibility would improve the current staff’s resume when it’s time for Athletic Director Mike ThomasJT to decide on the team’s head coach going forward.

A bowl game would also be an opportunity for the senior players to leave on a high note, a motivation for many underclassmen on the team.

But for offensive lineman Ted Karras, there’s a different motivation. He was surprised that Purdue didn’t make an offer to the Indianapolis native when he was in high school. One of his favorite memories was ending the Illini’s 20-game Big Ten losing streak in West Lafayette, Indiana, two years ago, but he is ready to create another.

“It’s my home state and the guys that didn’t offer me,” Karras said. “We ended a big losing streak there two years ago, so I want to go do it again.”

Some of the players admitted that last year’s loss to the Boilermakers will fuel them heading into Saturday’s matchup. Illinois’ offense will need quick adjustments if it wants to leave with a win. Starter Josh Ferguson is likely to play, which will open up the Illini running game.

Freshman Ke’Shawn Vaughn has been the primary rusher since Ferguson’s injury and struggled against Penn State, but could rebound against the Boilermakers. Purdue ranks last in the Big Ten in rushing defense and has allowed 16 rushing touchdowns and let opponents average 183 rushing yards against Purdue.

Illinois’ defense will try to rebound after allowing 39 points to the Nittany Lions. Purdue quarterback David BloughJT poses a problem in the air and on the ground. The freshman threw for 274 yards and four touchdowns and rushed for 82 yards, including a 56-yard touchdown against Nebraska last SaturdayJT.

The Illini’s defensive line failed to create any pressure on Penn State quarterback Christian HackenbergJT after the unit showed vast improvements from last season. The linemen need to be a factor if players want to limit Blough’s impact.

Illinois and Purdue will be playing for the Purdue CannonJT, a trophy that is presented to the winner of the rivalry game. Purdue leads the trophy series 33-27-2 and reclaimed the trophy after last season’s 38-27 winJT at Illinois.

Rivalry games are exciting for many of the players and they use it as extra motivation. But with four games left in the season, a bowl-berth near reach and the future of the program hanging at the balance, the Illini know that Saturday will be an important game.

“It’s a trophy game and it’s huge,” Fejedelem. “This is a big game in the season, we have four games left and this is one where we need to come up after three loses.” Tweet: Illinois football enters crucial part of the season against Purdue on Saturday #Illini #Boilermakers