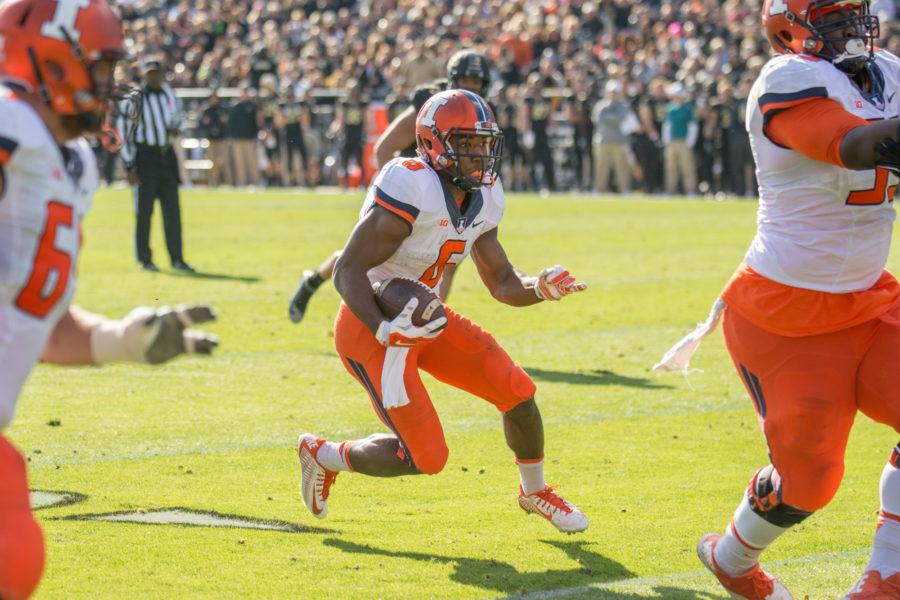 Running back Josh Ferguson makes a run for a touchdown during the game against Purdue at Ross-Ade Stadium on Saturday, Nov. 7. Illinois won 48-14.

It was Ferguson’s first time hitting the field since Oct. 3, when he suffered a shoulder injury against Nebraska. And the senior was quick to show that his return was much needed for Illinois’ offense. In the Illini’s 48-14 win over Purduess, Ferguson finished with 133 yards on 12 carries.ss

He demonstrated his escapability the entire game, finding holes left and right.

Illinois got its second Big Ten win of the season, snapping a three-game losing streak. And Ferguson proved just how much of an asset he is to the Illini.

Ferguson and Lunt connected for six catches for 41 yards. The offense finished with 595 total yards.

“He’s a special player,” Lunt said. “To get him back and have him be healthy is awesome.”

Questionable since his Week 5 injury, he was listed as probable on Thursday’s injury report and coaches seemed confident that he would play in the game. He initially wanted to be back for Illinois’ Homecoming game against Wisconsin, but had to wait until this weekend.

With Henry Enyenihiss out for the game with a sprained knee, the run game depended on Ferguson and freshman Ke’Shawn Vaughn.

Illinois had 382 rushing yards, with 302 coming from the duo. It was the first time since 2011 that Illinois had two players rush for 100-plus yards — the last time was Donovonn Young and Troy Pollard teaming up to run roughshod on one Bill Cubit’s Western Michigan team. It was also the first time the Illini ran for over 300 yards since 2010.

The two running backs fed off each other.

“It felt good having him right by my side to take some of the pressure off me,” Vaughn said. “It’s a big difference, offensively we believe we can get more done.”

Vaughn finished with 180 yards on 16 carries with two touchdowns.ss In the third quarter, he broke free for a 78-yard touchdown.

“He’s starting to learn how to run in the Big Ten,” Ferguson said on Vaughn’s performance. “We’re very happy with what he did today.”

In a post game press conference, Cubit wasn’t shocked by his team’s ability to come back after its 39-0 Penn State loss.

“They came back,” Cubit said. “Today was a pretty good indication, they’re going to fight and they just don’t take no for an answer.”

Cubit’s postgame press conference was separated from the Illinois locker room only by a curtain, so a constant buzz of celebrating players often overshadowed the head coach’s remarks.

The team’s energy was heightened by the return of Ferguson and the offensive domination that the team has wanted to demonstrate since it began Big Ten play.

Cubit said that the players and coaches know the power that Ferguson’s presence brings to the team.

“Anytime six is out there and he may run one, we’re on the headphones going ‘Wow. Look at that run,’” Cubit said.