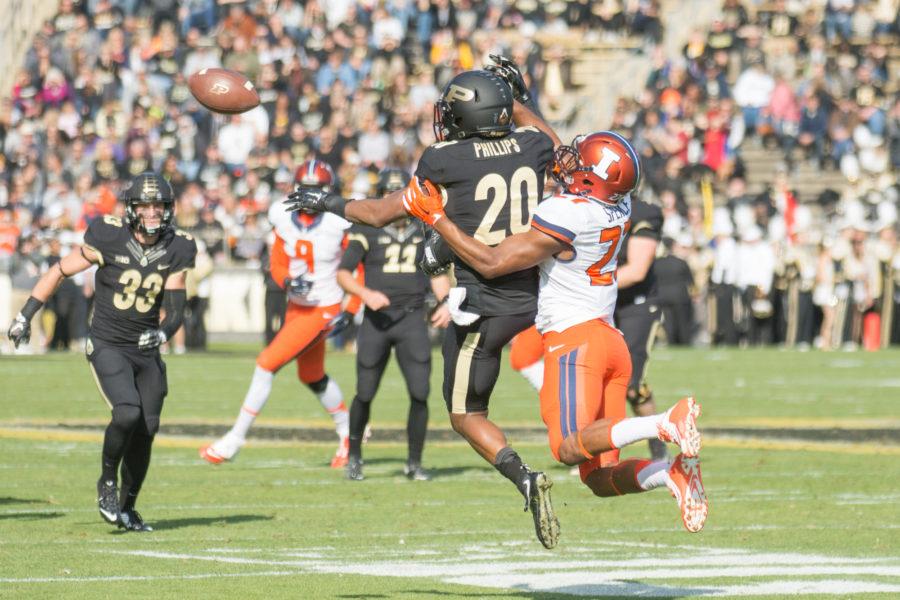 Defensive back Eaton Spence breaks up a pass during the game against Purdue at Ross-Ade Stadium on Saturday, Nov. 7. Illinois won 48-14.

WEST LAFAYETTE, IND. — The Illini football players knew there was a lot riding on their game against Purdue on Saturday and they responded.

Illinois played a near-perfect game in all three phases in the Illini’s 48-14 win over the Boilermakers. The Illinois defense created pressure from the beginning and the return of running back Josh Ferguson helped the offense look like it did before the senior’s injury.

The Illini responded a week after they lost 39-0 at Penn State, just like head coach Bill Cubit expected.

“We have a lot of character, that’s all I talk about with our kids,” Cubit said. “They have consistency and they know what we’re expecting.”

Ferguson had an impact on the offense from the team’s first drive, when the Illini scored a touchdown. The senior caught a pass for five yards on Illinois’ first offensive possession and rushed for an additional seven yards before Malik Turner caught a touchdown pass from quarterback Wes Lunt.

The senior running back helped push a running game that struggled in the last three games. He finished with 131 rushing yards and added 41 receiving yards. The return of Ferguson put less pressure on freshman Ke’Shawn Vaughn, who struggled the last two games in the starting role. Both Vaughn and Ferguson had 72 rushing yards at the half and Vaughn finished with 180 yards on the ground and one catch for 23 yards.

Ferguson’s addition also opened up the passing game. Lunt threw for three touchdowns and 156 yards in the first half and finished with 169 yards. His wide receivers were also more consistent than in recent weeks. Freshman Desmond Cain led the group with 74 yards and scored his first career touchdown in the second quarter when the Illini drove 72 yards down the field with 57 seconds left in the first half.

The Illini struggled to gain much momentum on offense without Ferguson in the lineup, but with him back, he provided the intangibles that made his coach very proud.

“He just makes things happen,” Cubit said. “College coaching to me is watching Josh with a smile on his face after the game. That makes it all worth it.”

The Illinois defense did allow the Boilermakers to go down the field on their last possession of the first half — the first time they crossed midfield — and score a touchdown on a three-yard Blough run.

Illinois now sits at 5-4 and 2-3 in the Big Ten. The Illini need to win one more of their three remaining games to become bowl eligible and they host Ohio State next Saturday.

Although the players are proud of the win, they still know there is an end goal they haven’t yet attained.