Grading the Illinois football team after its win over Purdue 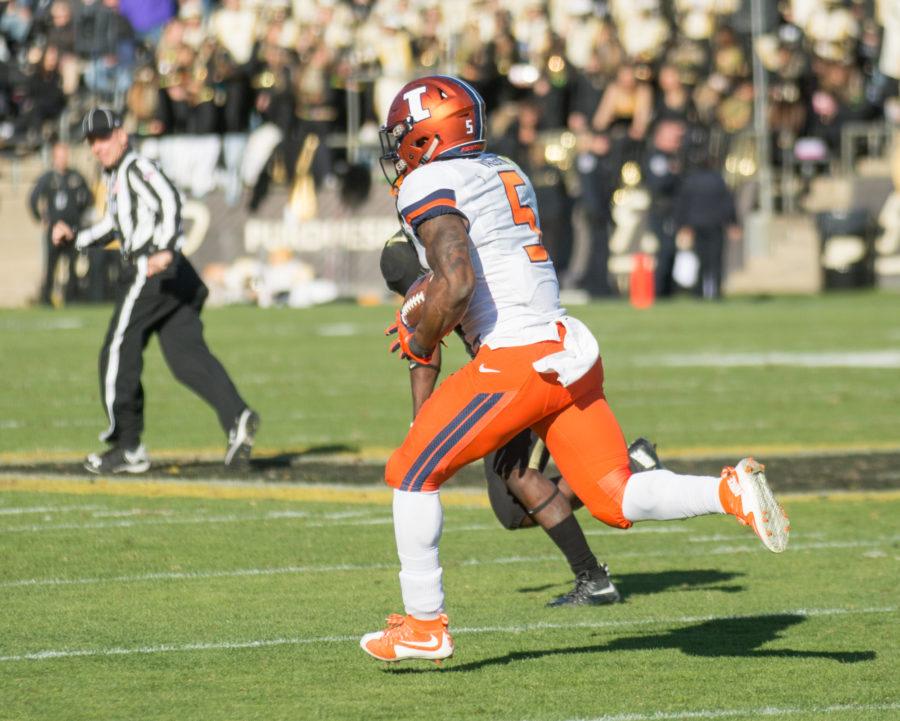 Running back Ke’Shawn Vaughn finds a hole and runs for a touchdown during the game against Purdue at Ross-Ade Stadium on Saturday, Nov. 7. Illinois won 48-14.

What a difference Josh Ferguson makes.

The senior running back added versatility that was missing at the position since he was injured against Nebraska in early October. He came out and made a statement on the ground and in the air. He finished with 133 rushing yards and 41 receiving yards and extended plays on the field both on the run and after catching the ball, which helped the offense gain momentum.

When Ferguson wasn’t on the field, freshman Ke’Shawn Vaughn was a threat. The freshman running back had a career day, finishing with 180 rushing yards — including a 78-yard touchdown — also caught the ball for 23 yards.

The dominance on the ground allowed for quarterback Wes Lunt to open up the passing game. The junior threw for 169 yards and three touchdowns. Freshman wide receiver Desmond Cain led the team with 74 receiving yards and caught his first career touchdown.

Illinois’ defense looked dominant after allowing 39 points to Penn State the week before.

The Illini’s defensive line was aggressive from the start and created pressure on Purdue quarterback David Blough throughout the game, even though it was the linebackers and secondary who got to the line of scrimmage more. Linebacker T.J. Neal led the team with three tackles for loss and safety Clayton Fejedelem followed with two — he also led the team with 13 total tackles and 12 solo tackles.

Taylor Barton and Jevaris Little each had an interception and four other players also dropped interceptions.

The special teams had good moments against the Boilermakers but some of the players’ bad habits from previous games showed up again.

Kicker Taylor Zalewski attempted three kicks and made two while Ryan Frain was forced to punt four times and finished with an average 54.5 yards per kick. The special teams coverage on kickoffs and punts were not sharp, including a Purdue punt return that made it back to Illinois’ 25-yard line. The Boilermakers finished with 59 yards on two punt returns and 95 yards on seven kickoff returns.

It was nice for head coach Bill Cubit and the coaching staff to have Ferguson back to help the offense. The playcalling offensively and defensively was just right against the overmatched Boilermakers.

There were moments when Cubit showed some iffy judgment. The Illini were fored to burn a couple of timeouts because of slow offensive playcalling and Lunt’s inattention to the play clock, leaving Illinois without timeouts for the last minutes of the first half. Illinois had the ball with 52 seconds left in the first half with timeouts. But a Darrell Hazell timeout stopped the clock after first down and Vaughn crossed midfield with a big run on the next play. The Illini ultimately scored a touchdown because of Purdue’s clock mismanagement.

Cubit had the same troubles with clock management in the second half but it didn’t matter with Illinois’ large lead.