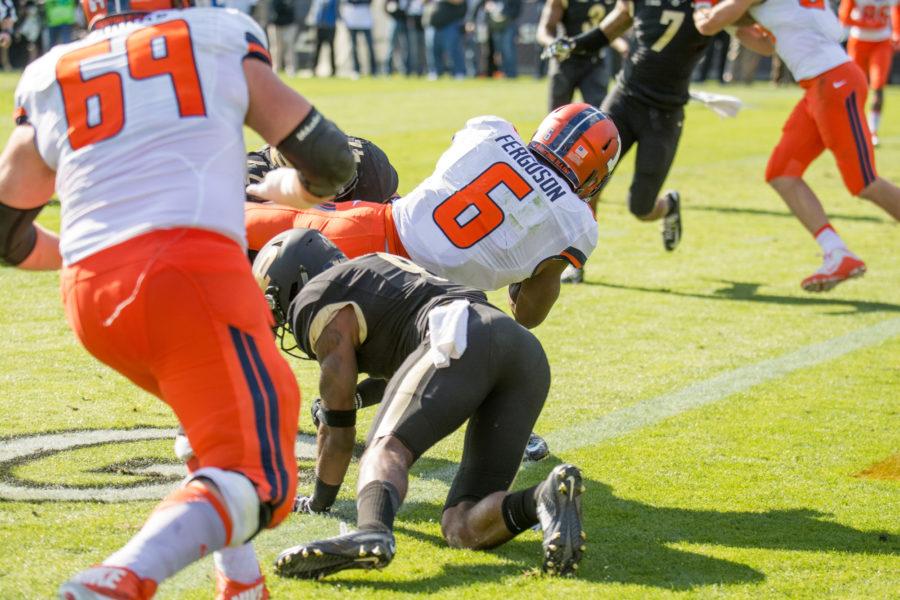 Running bak Josh Ferguson dives for a touchdown during the game at Ross-Ade Stadium against Purdue on Saturday, Nov. 7. Illinois won 48-14.

While Illinois football’s running back Josh Ferguson was the star of his team’s 48-14 win at Purdue on Saturday, the defense made sure to do its job so that the margin would never be close.

The defensive players responded against the Boilermakers after allowing 39 points to Penn State the week before. Illinois knew it couldn’t allow another performance such as the one in College Park, Pennsylvania, and made sure it played a near-perfect game.CC

“We had some good contain,” safety Clayton FejedelemCC said. “The linebackers played great, the defensive line created pressure and the secondary, we let a couple balls slip — I’m a victim of one of those — but we had opportunities and made plays.”

Illinois created pressure on last week’s Big Ten Player of the Week David Blough, who threw for 274 yards and four touchdowns and rushed for an additional 82 against Nebraska. The Illini contained Blough for much of the game: the freshman had little time to find open receivers and wasn’t given the opportunity to curl around and run down the field. Blough finished with 174 passing yards, a touchdown and two interceptions — one each by Taylor Barton and Jevaris Little.CC

Linebacker T.J. Neal led the team with three tackles for loss while Fejedelem added two more and led the team with 13 total and 12 solo tackles. The Boilermakers couldn’t find any holes in the Illini line and finished with 89 yards on the ground.

The defensive group has shown great improvements compared to the past few season and has lived up to different challenges, but the players know that they can’t dwell on their current success.

“There was a lot of communication,” defensive end Jihad WardCC said. “Once we execute, punch him right in the mouth, things go right. We have a lot of work to do still and we need to focus on Ohio State.”

Quarterback Wes Lunt had Illinois fans worried when he ran back to the locker room just before the start of the second half.

The junior left with a thumb cramp to his throwing hand and had to go to the locker room to get an IV. Lunt came back into the game, looked fine and joked about it after the game.

“It was weird,” Lunt said. “I was just warming up and about ready to go in but every time I threw a followed through, my thumb, the whole finger would cramp up, and I couldn’t open my hand.”

Backup quarterback Chayce CrouchCC came into the game and on his first play in, he had a 17-yard run. Crouch also threw a 19-yard pass to Ferguson and a 25-yard pass to Desmond Cain — the quarterback finished with 44 passing yards and 45 rushing yards in 11 plays.CC

Head coach Bill Cubit was surprised when Lunt was forced to leave the game but knew Crouch could handle the pressure.

“You have to give Chayce credit,” Cubit said. “He made a couple mistakes and put completed a pass but he did have a couple of nice runs and Wes was set and all ready to go.”

It’s been a rough season for freshman wide receiver Desmond Cain, who has been one of the wide receivers forced to contribute early because of injuries to Mike Dudek and Justin Hardee. But Cain had his breakout game against Purdue.

The freshman led the team with 74 receiving yards and caught his first career touchdown.CC Cain has been part of a group that has dropped over 40 passes during the season but has showed that the confidence the coaching staff has shown him is worth the trust.

“Des is a very shifty guy,” Lunt said. “He’s been really close in every game in taking that next step and today he took it.”