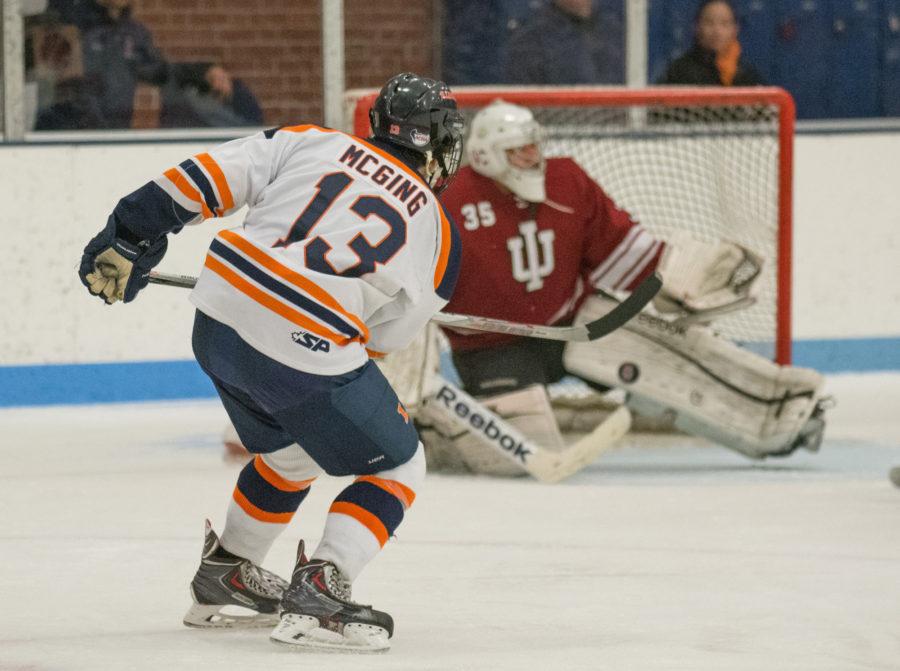 James Mcging puts a shot on goal during the game against Indiana at the Ice Arena on Saturday, Nov. 6. Illinois won 5-2.

After several weeks of playing without multiple key players, the Illinois hockey team seems to be getting over its injury bug.

Captain John Olen, forward Mike Fischer, center Josh Belmont, defensemen Austin Zima and winger Kyle Varzino are all planning on returning to the ice this weekend against Iowa State. Fischer has been out since the first weekend of the season with a broken collarbone. Belmont, who took a puck to the face during a practice, is waiting to be cleared. Zima will await clearance from a back specialist and Varzino is recovering from a lingering knee injury.

The return of Olen will be big for the Illini offense. Olen leads the Illini with 34 points last season. In his second season as captain, Olen has only played in four games — he recorded one goal and one assist in that span. The star forward broke his ankle in the series against Alabama.

Olen skated with the team during warm ups before both games against Indiana this weekend but did not play in either game. His return will be noticeable in the locker room.

“Everybody in the room is excited for him to come back,” Fabbrini said. “Anytime you get a leading scorer and a captain back, everybody gets a boost. We all know he can be a big difference maker for us.”

Illinois’ left wing James Mcging is as unselfish as they come.

He said he will pass up any shot to give his teammates a good look at the net.

But on Saturday night, in the waning minutes of Illinois’ 5-2 victory over Indiana, Mcging was faced with a situation that would normally go against his better judgement.

Indiana, down two goals at the time, attempted one final push and pulled its goalie. The Illini defended the Indiana attack, and the Hoosiers turned the puck over to who else but Mcging.

Mcging broke out into open ice, and the only thing in front of him was an empty net. He had no teammates to pass to, and no defenders in his way. Mcging went on to take the shot, scoring the goal that iced the win.

It was Mcging’s third goal on the season.

“I thought about missing on purpose honestly, to keep my ratio (of goals to assists) low,” Mcging said. “I also thought about passing it off the boards and into the goal.”

Forward Grant Stueve has been a key contributor to the Illini all season.

Stueve scored two goals in Saturday’s win against Indiana. Both goals came on power plays. The second goal came halfway through the second period and gave the Illini a three goal lead entering the third period.

Despite these numbers, Stueve is still looking to get approval from his teammates. After the Illini victory on Saturday, during Stueve’s personal interview, one of his teammates in the back of the locker room said, “Stueve sucks!”

The remark was met with cheers from all of his teammates, and Stueve just hung his head.