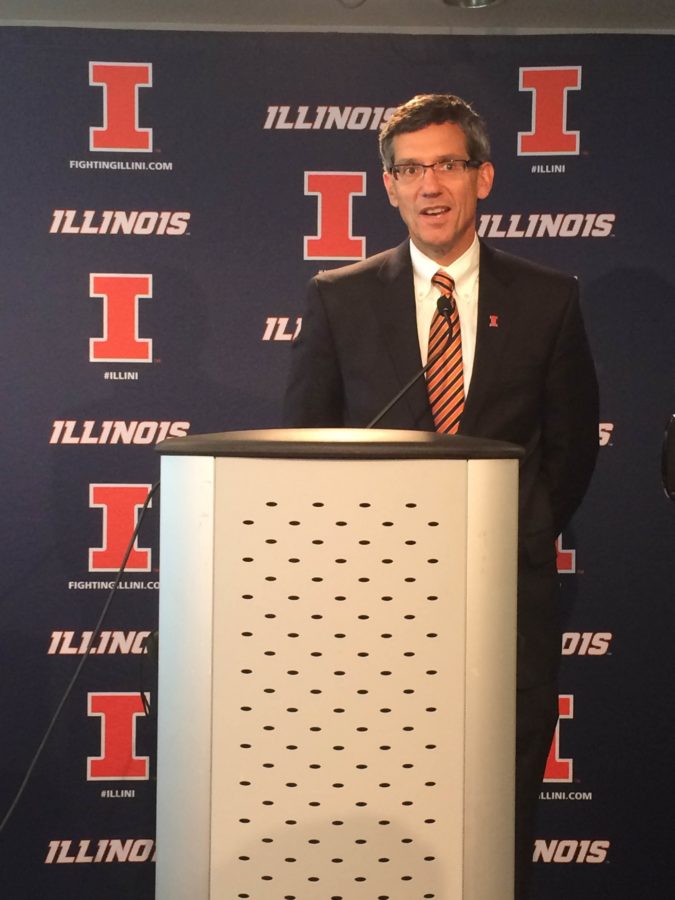 (11:30 a.m.) Kowalczyk ended the press conference by stating instability is always a challenge.

He said he will look into south end zone renovations at Memorial Stadium quickly and has no concerns with State Farm Center renovations. He plans to reach out to sponsors and bring confidence to them about the athletics department.

(11:25 a.m.) Kowalczyk said these are challenging times to take the position.

“I will try to calm the waters and keep this moving forward,” he said.

He said he will not be making any hiring decisions about the top employees in the department.

He said his first reaction was sadness when he was told about the firing, but “when you’re asked to step up, you step.”

Kowalczyk said there will be no decision made about head football coach until the end of the season and the University won’t lose out on potential candidates by waiting until the end.

“It’s a big decision and Cubit and his staff have been doing a great job under the circumstances,” he said.

Kowalczyk said he talked to Thomas and he’s a class act. He said they had a good rapport and he handled things with grace.

“I don’t want him to feel like I’m betraying him,” he said. “We have a great institution here and the head football job should be a destination job for coaches around the nation.

Kowalczyk said he will approach his new position day-to-day and would not say whether he wants the permanent job. He found out Wednesday afternoon that he would be asked to take over as interim director.

(11:18 a.m.) Wilson said athletics is the front porch of the University.

“We owe it to our student athletes that athletics can be at the best it can be,” she said. “Kowalczyk is the right person for the time.”

She said she has not talked in great detail about who the future chancellor, coaches or directors will be. Wilson has already announced that she is not in the running to serve as the next chancellor.

Wilson said she will be meeting with the coaches on Tuesday and is excited about all sports on campus.

She referenced the state’s budget lock being in the way. The buyout for Thomas costs $2.5 million. She said she is always concerned about having to spend money.

Wilson said these issues have been on her mind for a while and that the reports take everything into consideration.

Wilson said she will not be making decisions relating to athletics and is not concerned about having too many interim tags surrounding the University.

(11:10 a.m.) Wilson said the University needs to put the past behind them and is grateful to Thomas for his work at Illinois. She added she has confidence in Kowalczyk to lead the department until a new director is hired.

Wilson said she consulted with many people and she made the decision. Regarding the decision, she said there have been distractions and it was time to move forward. Wilson said she has full confidence in Kowalcyzk during the search for a new head football coach after the firing of Tim Beckman.

Wilson said University President Timothy Killeen was in constant contact with Wilson and she did not talk to the Board of Trustees. She talked to Thomas a week ago after receiving the finalized report last week.

She said they haven’t made any plans for the search of a new director.

Wilson says this is a great university and the greatness is not in the highest level of leaderships, the work is happening in the classrooms.

“Student-athletes are coming here to be part of this great institution,” she said.

At this point, the investigations are done.

(11:06 a.m.) Wilson said this past May when former student athletes raised complaints about their treatment, the University started an investigation. She said the University will take appropriate actions with the findings.

The final reports into allegations about football and women’s basketball were released on Monday. With investigations finished, she said they have time to take stock and learn from process.

The goal is for for student-athletes to have great career at Illinois, she said, and that a change in athletic directors is necessary.

She said no misconduct was done by Thomas, and that the change in leadership is pending Board of Trustees approval.

(11 a.m.) The Daily Illini sports staff will be attending a press conference held at 11 a.m. regarding the firing of Athletic Director Mike Thomas.

Check back for updates throughout the conference.