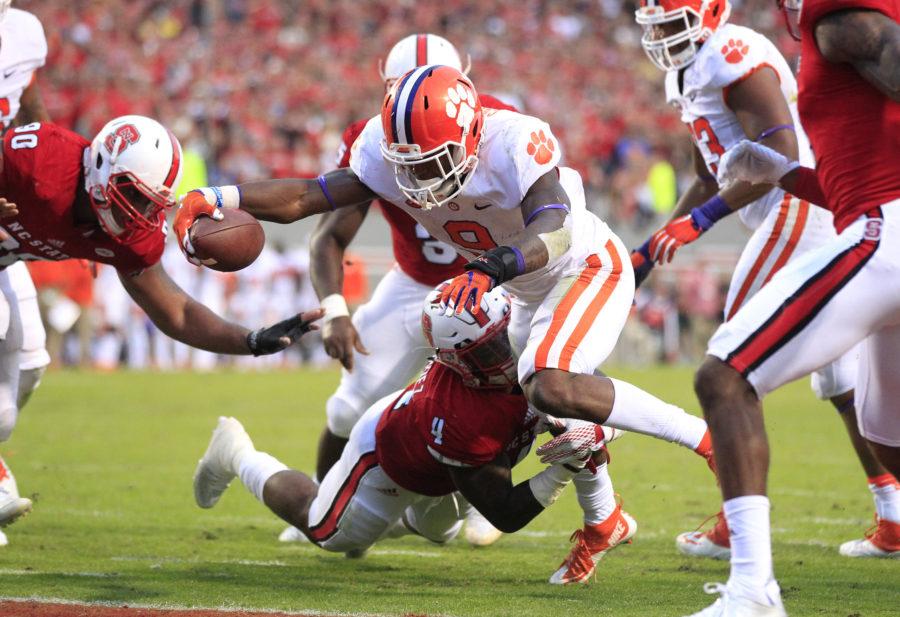 Editor’s note: Each week, The Daily Illini staffers will offer up their take on the teams that should make it into the College Football Playoff.

The Buckeyes are the undefeated defending champions. Regardless of strength of schedule, they’re going to be ranked here until they lose.

Clemson has beaten another top-10 team (Notre Dame) and the Tigers have a clear path to being undefeated now that they knocked off Florida State.

The Cowboys are on a collision course with Baylor — my first team out — for the Big 12 Championship. They get the edge because of their win over TCU.

Nick Saban and the Crimson Tide made previously undefeated LSU look like a Conference-USA team in Saturday’s 30-16 win.

Clemson continued its reign this year over the college football landscape after beating Florida State. After starting at No. 12 in the AP polls this year, the Tigers are looking like the favorite to end the season with the top spot.

Nick Saban and Alabama football are back this year after crushing LSU on Saturday with a 30-16 win. The Crimson Tide are the team to beat in the powerful SEC, whose champion will likely make it into the CFP.

Even though they’re the undefeated defending champions, the Buckeyes haven’t been dominating this year. If they win out, they’ll make it in, but if they lose before the end of the season, they’re out.

The Irish continue to win after losing to No. 1 Clemson in Week 5. DeShone Kizer has led the Irish to become a serious contender again after starting quarterback Malik Zaire went down in Week 2 against Virginia.

The Tigers showed their No. 1 ranking was no fluke after they defeated Florida State comfortably 23-13.

Ohio State struggled to get rid of Minnesota in the first half but shook them off without J.T. Barrett even though Cradle Jones didn’t look his best,

Nick Saban and his team knew they couldn’t suffer another loss against SEC rival LSU and made easy work of the former No. 2 team.

Jarrett Stidham showed he can handle the pressure against Kansas State where he threw for 419 yards and three touchdowns.

Nobody has a resume that’s even close to Clemson’s right now, with two victories over top-15 teams. They’re the most consistent team in the top four.

The only blemish on Bama’s schedule is a flukey loss to Ole Miss that included five turnovers. All the team’s other performances have shown it may be the best in the country.

The Buckeyes have handled their mediocre schedule as well as one could expect. They’ll be plenty battle-tested by the time the playoff comes around, with games against Michigan and likely Iowa still to come.

The Playoff Committee may not be taking margin of victory into account, but I do. Baylor has obliterated every team on its schedule save Kansas State last weekend, which gives its schedule an edge over Oklahoma State’s typically tight triumphs.

With gutsy, hard-fought victories over Florida State and Notre Dame, the Tigers are arguably performing better than everyone in the nation. Currently, they are most deserving of the top spot in the playoff rankings.

Say what you will about the Crimson Tide, but once again they proved their mettle in the SEC by controlling LSU. Their combination of defense and Derrick Henry’s legs give them inside position on another playoff appearance.

Despite complaints about the strength of schedule and so-called “style points”, the Buckeyes just figure out ways to win. As the defending champions, only a loss will derail their playoff hopes.

It may come as a surprise to some but the Cowboys are undefeated. Following their rout of previously undefeated TCU, Oklahoma State’s playoff case can no longer be overlooked.

Clemson has shown they can hang with the best teams. Beating Florida State and beating another team we could see in the playoff — Notre Dame — the Tigers seem poised to claim the top spot.

After beating LSU, the Crimson Tide has shown once again that they are elite. With an amazing smash and dash backfield with Derrick Henry and Kenyon Drake, a loss to Ole Miss earlier in the year is the only thing holding Bama back from the top spot.

This spot is a toss up between Big 12 foes Baylor and Oklahoma State, but Baylor gets the edge. The Bears have dominated their competition this season, and are staring down a clash with the Cowboys on Nov. 21.

The defending champs will have their litmus test in the final stretch of the season. They have Michigan and Michigan State as their final two games of the regular season, two teams who may not be playoff bound, but would love to knock off the Buckeyes.