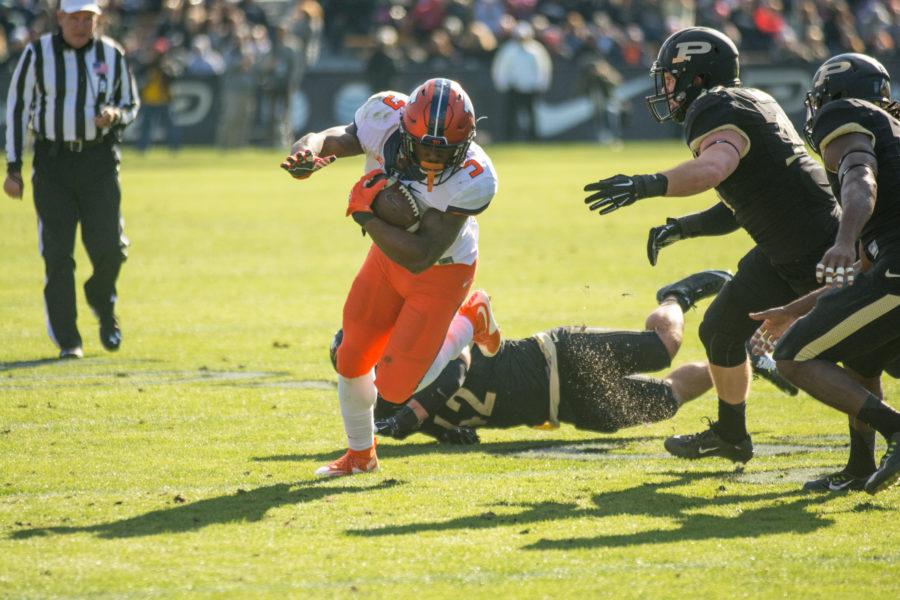 Running back Ke'Shawn Vaughn breaks a tackle and makes a run during the game at Ross-Ade Stadium against Purdue on Saturday, Nov. 7. Illinois won 48-14.

Whether it’s on the field or the sideline, the senior is constantly telling the freshman what he can do to improve, and gives him cues about the opponent’s defense.

It makes sense that the two are always talking. They are the twin cogs of Illinois’ rushing offense and showed the impact they could have together in Saturday’s 48-14 win over Purdue.

Illinois had 382 rushing yards, with 302 coming from the duoMD. It was the first time since 2011 that Illinois had two players rush for 100-plus yards in one game — the last time was Donovonn Young and Troy Pollard teaming up against Bill Cubit’s Western Michigan team. It was also the first time the Illini ran for over 300 yards as a team since 2010.

His thought process when running straight down the field for 78 yards: just score.

Vaughn’s 203 total yards earned him the Big Ten Freshman of the Week award. His career day was made all the sweeter after a quiet performance against Penn State when he ran for 38 yards on 15 carries.

Illinois coaches credited the return of Ferguson to Vaughn’s improved performance — it was Ferguson’s first bit of action since going down with a shoulder injury in Week 5 against Nebraska.

During his time off, the senior back worked to strengthen his legs and his cardio level. Even after running 133 yards against the Boilermakers, Ferguson said he was surprisingly not as tired as expected after his return.

Ferguson was impressed by Vaughn’s play when he filled in as the starting back.

“In high school, you can get away with more instinct and the guys just aren’t as fast,” Ferguson said. “You’ve got to learn to play being in the right place at the right time, making the right moves – all the little things like that. I think he’s gotten better the past few weeks and it was good to see. There’s no better teacher than an actual game.”

The pair’s relationship reminds Ferguson of himself and Donovonn Young as freshmen. The two had a similar partnership throughout their time and shared advice with each other.

Coaches and media have compared the Young-Ferguson backfield with this year’s duo — there’s competition for the starting spot, but Vaughn said the outcome is beneficial.

“It’s a good competition though because it does nothing but help the team,” Vaughn said. “It’s a cool little competition.”

Vaughn is happy to have Ferguson back because it takes the pressure off of him, he said

And Ferguson agrees that playing back-up has certain draws.

“He was just telling me how he likes being back up,” Ferguson said. “And I told him that makes complete sense because there was a day where I thoroughly enjoyed not starting. It’s because the defense forgets about you — they’re not thinking about the backup running back. There’s some things you can take advantage of and I think he’s finally coming into that role and enjoying it.”