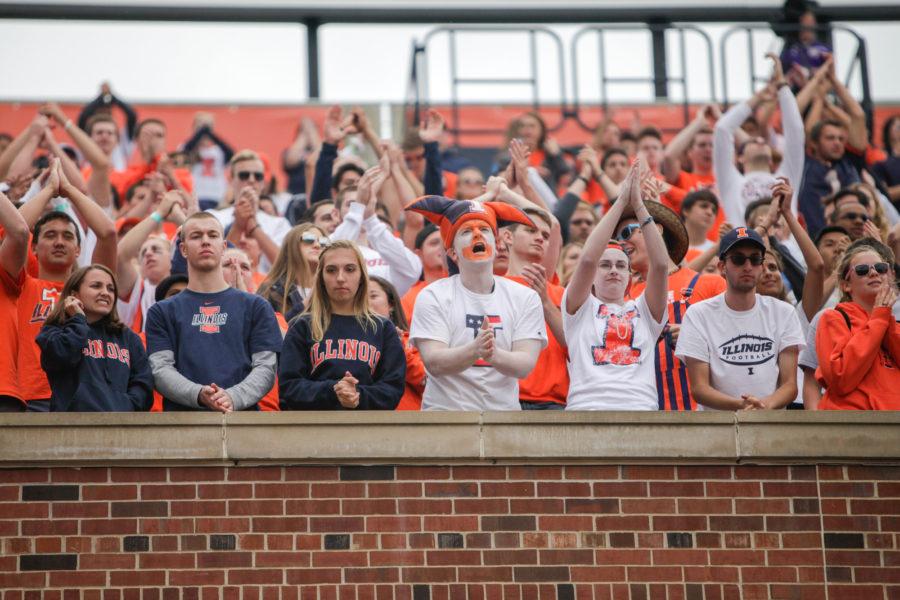 Despite being cleared of wrongdoing, former Athletic Director Mike Thomas had about a snowball’s chance in hell at surviving the report about the allegations surrounding Illini athletics.

Whoever follows Thomas as AD will certainly start with their back against the wall. Except the wall will be on fire, the room will be filled with venomous snakes and fans dressed in Illini garb will be continuously launching tomatoes in the general direction of their face.

The Illinois AD job may be one of the least desirable in the Big Ten. The two most important sports to an AD are the major revenue generators: football and men’s basketball. Neither program is currently sitting pretty — with the football team in need of more repair than the men’s basketball team.

Not to mention, with the University’s athletic programs in a negative national spotlight, it begs the question: what will this do recruiting down the line? Throw in the fact that a great deal of your fan base is angry with you and this job looks even less appealing.

Or maybe not. Maybe, it’s just the opposite.

Maybe this job is exactly the one that an up-and-comer from a mid-major conference would want. This campus is filled with programs that compete for national titles on a regular basis: men’s golf, volleyball, men’s gymnastics and wrestling, to name a few.

It’s also an opportunity for a fresh start with a fan base that is eager to return to greatness once again. If you can turn the football and men’s basketball programs around, you’ll be paraded through Champaign and showered in champagne.

Regardless, whoever takes this job must be an experienced leader and effective communicator in order to navigate the Illini ship through these tumultuous times.

I already know what you’re thinking, Illini nation — “Why don’t you just take the job, Kevin?”

Initially, I wanted to proceed with caution since I’m going to be accepting the head football coaching position soon. I thought that it may be too much on my plate considering I’m only 19 years old.

I’ve since realized how cowardly I was to think that and am now prepared to take up both positions. Not that anyone needs more reasons to hire me, but I wanted to lay them out clearly. Here are the top 10 reasons why I should be the University’s next Athletic Director.

10. Unlike the previous athletic administration, I promise to clearly communicate with the head football coach. Since that’ll also be me, this shouldn’t be a problem. I’m with myself all the time.

9. I can relate to the student body. I am a student, and I also have a body — so this shouldn’t be a problem.

8. Dee Brown and I are pals. If you don’t believe me, read my column from last week. Brown works closely with the AD in his new position. It’s in the best interest of the University to bring in someone who has already built up a credible relationship with the prince of Champaign. Also, Dee told me to “holler” at him if I needed anything. I will do just that — he can be my first reference.

7. I can save the University money. Tim Beckman and Mike Thomas collected just shy of $2.5 million combined in 2014. The University can kill two birds with one stone by promoting me to both positions. I’ll offer the University an ol’ buy-one, get-one-free — pay for my salary as football coach, and I’ll take the AD position for free. You can’t find that sort of deal in the Sunday newspaper.

6. I took Microeconomics, a.k.a ECON 102, and earned a B+ in the course. If that doesn’t prove my ability to manage finances, I’m not sure what will. This University is budgetless, someone needs to tighten its belt and turn it around. I can be the guy.

5. I could be the first Illinois AD to rock the man bun. Look, I loved Mike Thomas. However, he was lacking in the hair department. With recent transgressions, DIA could definitely use some fun right now. Surely, the bun can get the job done.

4. I decided to drop out of the Speaker of the House race to pursue this job. That, my friends, is dedication.

3. With newly renovated facilities like State Farm Center, the University’s athletic administration’s only job will be to keep its facilities clean, up and running. Ask either my mother or my roommates and they’ll tell you — I know how to keep my room clean.

I’ll certainly be up for the task of keeping up the University’s sports facilities. I’m also the only member of my apartment who frequently does the dishes and cleans the floors.

That last part is more of a cry for help than anything else.

2. While it may be too late to ask help from alumnus George Halas, I do have connections to former Illini and Chicago Bears’ linebacker Dick Butkus — we both lived in Scott Hall as freshmen. Butkus and I can leisurely ride through the Illinois plains in search of five-star recruits. What recruit would say no to Dick Butkus?

1. I can relate to today’s athletes. As a bench warmer for the basketball team during my sophomore year of high school, I learned what it takes to be an elite athlete. Between filling up bottles of water for the good players, I learned skills that will last a lifetime.

I look forward to leading this athletic department to prominence. Under my leadership, we will go places that Illini fans never thought possible.

Kevin is a sophomore in Media.