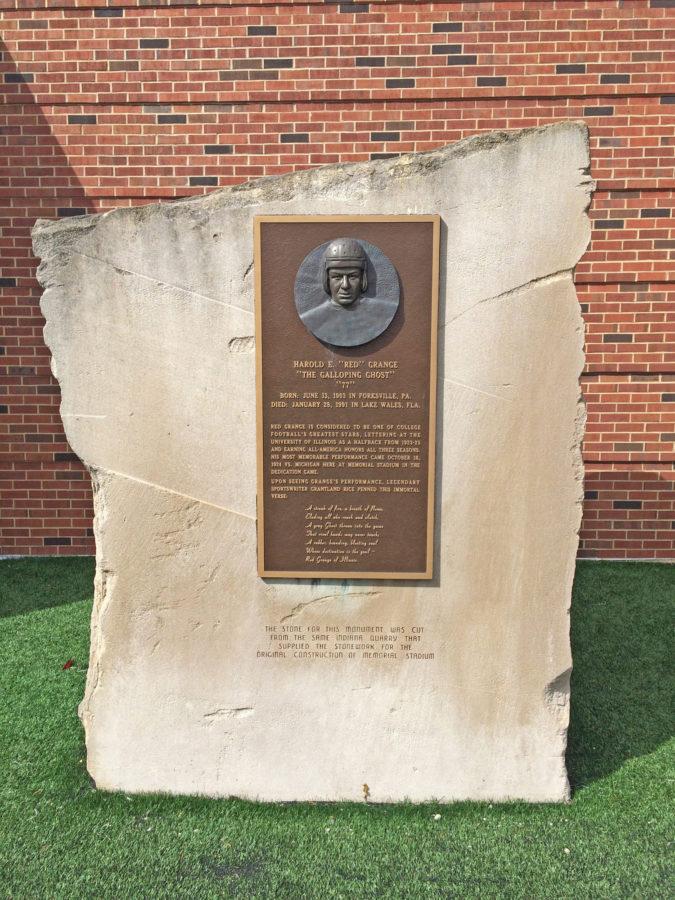 The beat set by the Illinois drumline before an Illinois football game is spine-tingling.

Sixty thousand fans dressed in orange join in the repeated tribal cadence as line members unite with players in the tunnel. Slowly with each beat, the group approaches the entrance to the field — the fans’ claps help mark time until the entrance of their heroes.

The rhythm continues until the very last step in the tunnel, where the drums are suddenly replaced with the brass of the Marching Illini, fireworks and a welcome from the public address announcer.

Fans around the stadium cheer as the long-awaited hosts storm the field, some bearing flags while running to the home sideline.

But lost in the midst of the chaos stands something that few see: a large rock.

While fans focus on the smoke, fireworks and the mass of humanity, the players focus on placing their hand on the rock.

While fans focus on the present, the players honor the past.

On that large rock near the north end zone of Memorial StadiumJT sits a plaque honoring one of Illinois’ greatest players: Harold “Red” GrangeJT. When entering or leaving the field, players make sure to touch “The Grange Rock.”

It is a simple task compared to the battle players face on the field, but it is one worth doing in homage of a legend who graced the field on which they now play.

“The guy was a performer, he changed the game,” linebacker T.J. NealJT said. “He did a lot of great things here and in the NFL … it’s showing our appreciation for those who played on this field before us and just enjoying and honoring the man who played the game before us.”

“The Grange Rock” was dedicated on Oct. 22, 1994, in commemoration of the 70th anniversary of Memorial Stadium’s dedication and Grange’s historic performance against MichiganJT. “The Galloping Ghost” scored four touchdowns and ran 265 yards in 12 minutes against the WolverinesJT. The rock for the monument came from the same Indiana stone quarry that produced the stadium’s granite columns and features sportswriter Grantland Rice’s famous poemJT.

“A streak of fire, a breath of flame, eluding all who reach and clutch/A gray ghost thrown into the game, that rival hands may never touch/A rubber bounding, blasting soul whose destination is the goal.”

Although the Rock had been standing in the north side of Zuppke Field for two decades, the tradition of touching the rock began just before former head coach Tim Beckman’s second season in 2013. The coaching staff felt like the team needed some type of tradition just like other schools.

For most players, it’s quite a tradition to uphold.

“What a thing to do,” said running back Josh FergusonJT. “To touch the Grange Rock, that’s something that should’ve been implemented a little while ago, but it was good that (Beckman) got that going.”

Each player has a different way of honoring the Illinois legend. Players like junior offensive lineman Joe SpencerJT and freshman Gabe MegginsonJT make sure to wipe the rock from left to right with their hand. Others choose to touch a piece of the stone while others touch the plaque with Grange’s face.

This is just part of what embodies the traditions of college sports.

Many players make sure to touch the large Rose Bowl logo within the tunnel in hopes of returning to the game. Others have personal traditions: Head coach Bill Cubit stands at the entrance of the tunnel after each game to give his players a handshake or hug after a hard-fought performance.

Traditions are a special aspect of college sports and Cubit has been a part of many during his career. He knows the special place that traditions like the Rock hold for college athletes.

“It’s a bunch of kids having fun,” Cubit said. “They are so much fun. They’re not paid like they do in the NFL and it’s kind of the boys looking out after themselves … it’s more team-oriented.”

While the cadence won’t always be played when the players touch the Rock, every time they’re near it, they think of Grange.

The tradition is more than remembering a legend who played nearly a century ago.

“It’s very significant because Illinois does have some great history with different players,” Neal said. “You always want to know what you are a part of, where you belong and what you’re doing. It’s more than yourself that you’re playing for and what you’re representing.”