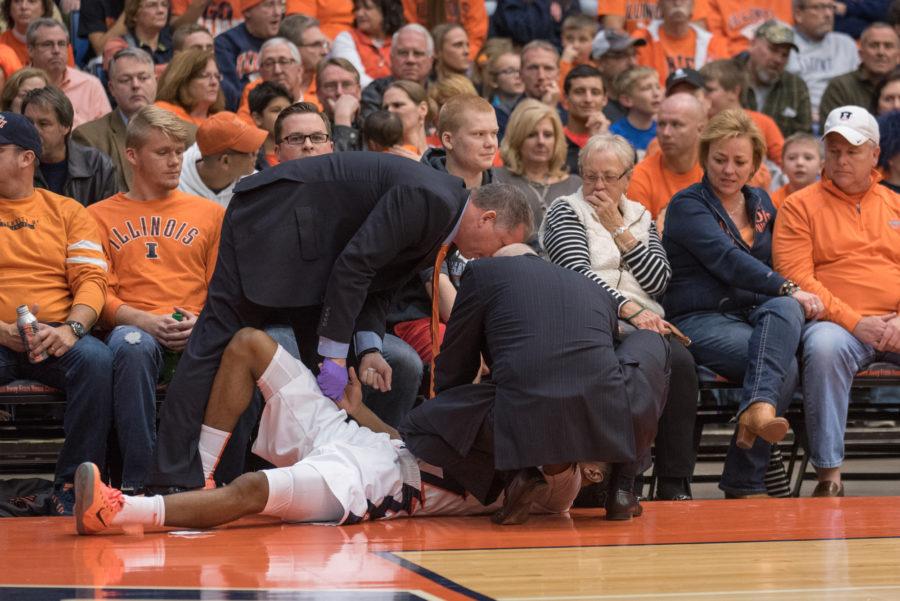 Jalen Tate lies on the ground injured and is tended to by the trainer and head coach during the game against Northern Florida at Prairie Capitol Convention Center on Friday.

For the first time in 16 years, the Illinois men’s basketball team begins the season with a notch in the loss column.

The crowd at Prairie Capital Convention Center in Springfield, Illinois, didn’t have much to be loud about in a 93-81 Illinois loss at the hands of North Florida. It’s been four seasons since the Illini dropped a game in November.

“We knew that going in, it was going to be a great challenge,” head coach John Groce said. “We certainly did not get beat because of effort and I don’t think we got beat because of lack of humility, we have great respect for North Florida. We knew who they were when we scheduled them.”

The last time Illinois allowed over 80 points was against Indiana in January, and its last opponent to score at least 90 was Wisconsin in Jan. 2014. The Ospreys feasted on Illinois’ zone defense and had stretches when they just could not miss — they finished the game 17-for-33 from downtown, with nine triples in the first half and eight in the second. The 17 made threes tied a school record.

North Florida was led by the the duo of juniors Dallas Moore and Beau Beech, who combined to score 51 points on 10 3-pointers. Moore led all scorers with 26, and Beech finished 7-of-8 from beyond the arc.

Illinois went with the opposite offensive approach and fed senior center Mike Thorne in the post for the majority of the game. In his regular season Illini debut, Thorne posted a monstrous line of 25 points and 14 boards, including six offensive rebounds for a handful of self-manufactured second chance buckets.

Despite his big night, Thorne was disappointed with the loss and expects more from himself and the team on defense.

“I think we just need to get better on the defensive end and maybe stop priding ourselves on the offense as much,” senior center Mike Thorne said. “I thought I played a not-so-well defensive game.”

The Illini trailed by as much as 14 in the second half. Junior forward Malcolm Hill led a late-game rally and nailed a three to pull Illinois within nine points, but North Florida answered like it did throughout the contest — with a three — and the Ospreys pulled away for one last time.

Senior point guard Jaylon Tate left the game in the first half with injured finger — the injury broke skin, so he returned to Champaign immediately for x-rays and to prevent any type of infection — so Hill handled the ball for much of the second half. Groce said the offense looked the most fluid with Hill in charge. The junior finished with 20 points, five assists and two turnovers, but struggled to find his range with a 6-for-17 shooting mark.

Hill said he was glad a tough game like Friday’s came early on the schedule, though.

“This is good for our team that we have this early,” Hill said. “This was a great challenge for us.”

Illinois is the only team in the nation to start the season against three straight NCAA-tournament qualifiers from a season ago, which continues with Sunday’s game against North Dakota State.