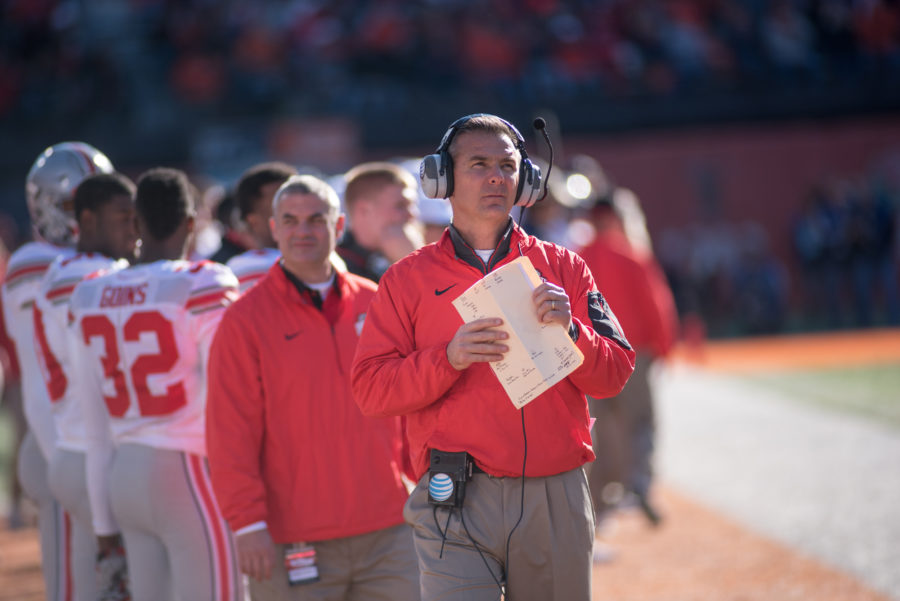 Ohio State head coach Urban Meyer watches his team march down the field during the game against Illinois at Memorial Stadium on Saturday.

Wes Lunt and the Illinois offense appeared to spark some momentum late in the Illini’s 28-3 loss to Ohio State on Saturday.

The Illinois quarterback completed a 37-yard pass to freshman wide receiver Desmond Cain to move the Illini to Ohio State’s 21-yard line. With his team down 21-3 and five minutes left in the game, Lunt looked like he was leading his team back into it.

But that Illinois momentum was soon extinguished. Lunt threw two incomplete passes and a seven-yard pass to Cain, but rushed the offense up to the line on fourth down and ultimately turned the ball over on downs when walk-on Cameron Tucker ran for a loss of yards.

The botched fourth-down attempt closed the door on Illinois’ hopes to win and pull off a major upset.

The failed sequence of events was demonstrative of how the offense failed to perform against the Buckeyes. Illinois’ defense made stops for much of the game, keeping Illinois within striking distance, but too many offensive blunders hurt any chance of an upset.

“We had our opportunities,” Lunt said. “They’re a good team, let’s be honest. Their defense is very talented.”

The offensive failed to capitalize in crucial situations and produced zero points off of Illini defense’s turnovers. James Crawford forced Ohio State quarterback J.T. Barrett to fumble the ball on the Buckeyes’ 31-yard line. Down 7-3, Lunt threw two incomplete passes — one an overthrown pass to Dionte Taylor who was open in the end zone — and running back Josh Ferguson lost a yard on a run. Kicker Taylor Zalewski missed the 50-yard field goal attempt. Ohio State had the ball at almost the same exact position with only 57 fewer seconds.

Lunt finished with 241 yards and completed 23 of his 47 attempts, but an inconsistent connection diminished his offense’s success. The quarterback admitted that he and the receivers weren’t on the same page for many plays, including essential ones in the end zone.

Head coach Bill Cubit also reiterated a problem the team has faced for much of the season.

“The issue is the depth,” Cubit said. “We just have so many guys out. The problem is personnel groupings just get locked in. A lot is put on Wes’ shoulders. He’s got to make some throws that we should’ve helped him out on.”

The lack of offensive playmakers because of injuries has been a season-long story, and that list continued to build during the game. Back-up running Ke’Shawn Vaughn left the game in the middle of the second quarter due to concussion protocol. Cain — who led the Illini with 102 receiving yards on 10 catches — left for part of the game, limiting an already depleted receiving corps.

With two games left and Illinois needing one more win to become bowl-eligible, players and coaches know that the loss and offensive struggles can’t linger in their heads for long.

“We just have to work with the two games we have left,” Lunt said. “We can’t let this snowball into something bad. We just need to get back to work.”