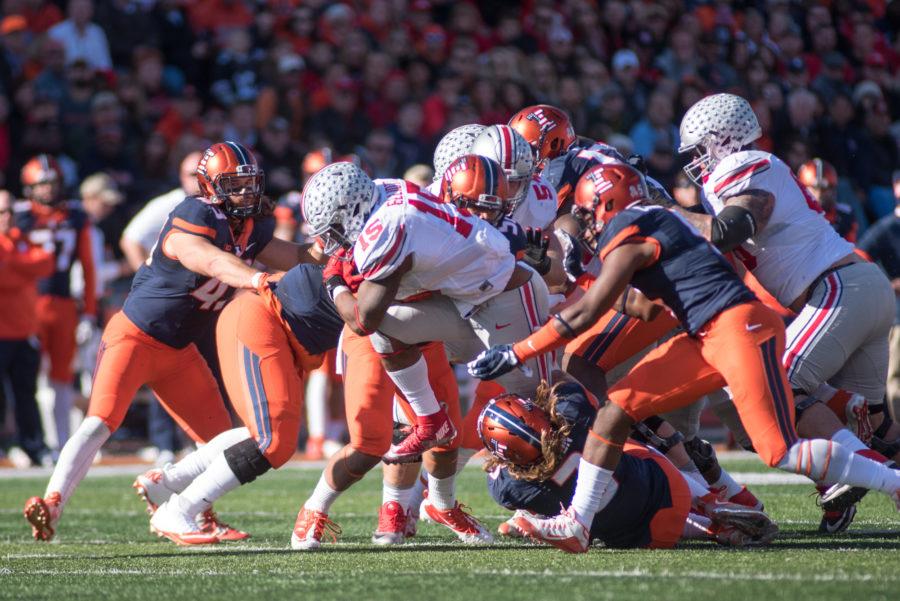 Ohio State running back Ezekiel Elliot charges through Illini defenders during the game at Memorial Stadium on Saturday.

An early goal line stop from Illinois’ defense was not enough to turn the tide in the Illini’s favor – Illinois went down 28-3 to the defending national champions: No. 2 Ohio State.

On the team’s first possession in the first quarter, Ohio State’s J.T. Barrett rushed for a touchdown, but the play was reviewed and reversed and Illinois’ defense was able to hold the Buckeyes to a field goal attempt, which they missed.

But while the defense performed well in the first half, limiting Ohio State (10-0, 6-0) to 14 points, Illinois’ offensive game could not get going. When the Illini defense made key stops and turnovers, the Illinois (5-5, 2-4) offense could not capitalize.

James Crawford forced a fumble and Dawuane Smoot recovered with six minutes left in the first half, giving Illinois the ball on Ohio State’s 31-yard line. Illinois lost a yard on the subsequent play and Zalewski ended up clanging a 50-yard field goal off of the right upright.

On another field goal in the second half, holder Ryan Frain couldn’t handle a bad snap and fumbled the ball while trying to run to the left, turning the ball over on downs. On a later series, the offense could not convert on a fourth-and-one situation in the red zone.

The defense struggled when Ohio State running back standout Ezekiel Elliot rushed for 83 yards alone in the third quarter. He finished with 181 yards on 27 carries with two touchdowns.

“He’s a great back,” linebacker Mason Monheim said. “The first time he came through the front side. When he busted through in the third quarter he came backside. It makes it difficult on us if we get a bad read or can’t get off a block. Credit to them — they were executing.”

Quarterback Wes Lunt struggled to connect with receivers and execute in key moments. He went 23-for-47 for 241 yards and no touchdowns. The Ohio State defense had three sacks and 11 TFLs, putting pressure on Lunt as he scrambled around the pocket.

“It’s just one play,” Lunt said. “I think one play can completely ruin a drive. We play off momentum.”

While the Buckeyes’ defense was able to penetrate the pocket on almost every play, the remainder of the offense failed to make an impact.

Senior wide receiver Geronimo Allison was quiet. He had only one catch for 38 yards.

Freshman Desmond Cain led the team in receiving with 102 yards on 10 catches. Malik Turner and Josh Ferguson were the next leading receivers with 61 and 26 yards apiece

The running game was also silenced, finishing with just 20 yards.

Senior Josh Ferguson — despite making a handful of big gains — was visibly tired by the second half. His backfield partner, freshman Ke’Shawn Vaughn, was on the bench for the second half, with a concussion. He finished with six carries for negative yards.

A drive in the second half ended with a loss of yards when Cameron Tucker came in to replace an injured Vaughn and battered Ferguson.

Clayton Fejedelem led the Illini with 15 total tackles. He was injured in the fourth quarter and had to be helped off with an ankle injury.

“We kind of shot ourselves in the foot — offensively and defensively,” Fejedelem said. “When you play a high caliber team like O-State, you got to be on both sides.”

Illinois will travel to Minneapolis, Minnesota, to take on the Gophers next weekend. The Illini remain one win away from bowl eligibility.