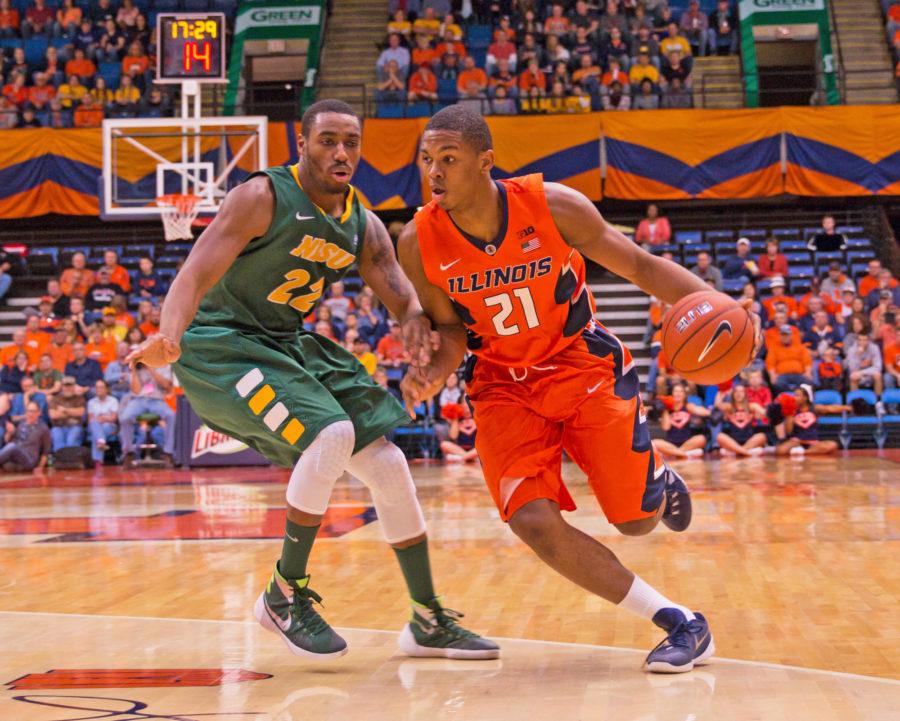 The Bison tried to contain the 6-foot-11, 270-pound graduate transfer from North Carolina-Charlotte, but the big man powered the Illini to their first win of the season.

Thorne received the ball on the block time and again in Illinois’ 80-74 win over North Dakota State en route to 21 points. He got it done on the defensive end as well, finishing with eight rebounds and two monster blocks.

But Thorne doesn’t care much for personal accolades — he made it clear he’s about winning.

“It’s always great to win, no matter what — doesn’t matter how many points I have,” Thorne said. “I’ve never experienced the NCAA tournament, so I’m just trying to win.”

The big man isn’t known for his free throw shooting ability, but he went 3-for-3 down the stretch to help catapult the Illini (1-1) to their first victory of the season.

The Illini showed tremendous resolve. The first half of Illinois’ Sunday afternoon tilt with North Dakota State took on an eerily similar vibe as the first 20 minutes of Friday’s loss to North Florida. NDSU came out drilling three-pointers like they were layups.

The Bison hit five of their first six trey-balls, including three from sophomore guard Paul Miller. In the first half, Miller posted 13 points after only missing one three-pointer. He played with the same type of confidence that North Florida’s Beau Beech displayed Friday evening, when Beech shot 7-of-8 from deep for 25 points. After twenty minutes, NDSU led 42-28.

Head coach John Groce credited his team for clawing its way back and snagging its first win of the season.

“The thing I learned most tonight what I knew about our group the whole time — you can throw out all the Xs and Os — is that we have character, we have grit and we have fight in the locker room,” Groce said.

Groce went on to say the win was a “top-5 gutsy performance” of his four years at the helm of the Illinois program. He had high praise for Leron Black in his first game back and for Alex Austin playing strap defense in his first-ever start.

Maverick Morgan (10 points) and Malcolm Hill (15 points) provided offense in crunch time. Hill shot 6-of-17 in the season opener, and struggled again from the field against NDSU, finishing 3-12. But the junior dished four of his five assists in the second half and cashed a clutch mid-range to knot the game at 57.

Another Thorne and-one gave the Illini a 60-57 lead. From that point on, the Bison never recovered the lead.