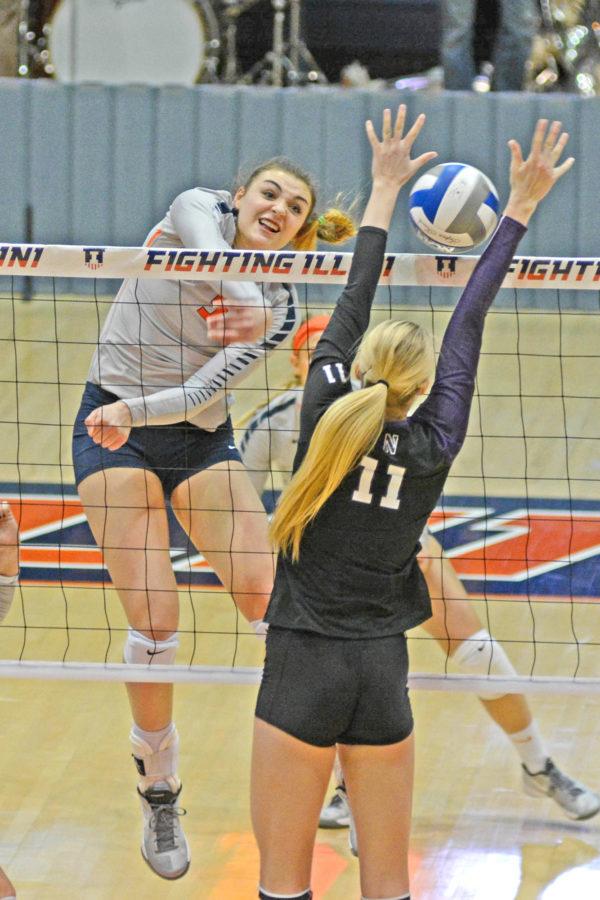 Illinois’ Ali Bastianelli (5) attempts to spike the ball during the match against Northwestern at Huff Hall on Saturday, Nov. 7, 2015. Illinois won 3-1.

The Illinois volleyball team plays some of the best teams in the country week-to-week — that’s the nature of the Big Ten — but playing Rutgers is a bit of an exception.

Saturday, the No. 17 Illini (18-9, 9-7)JT dismantled the struggling Scarlet Knights (4-24, 1-15)JT in three sets. Illinois’ victory comes just three days after it had its four game win streak snapped by No. 14 Ohio StateJT. Rutgers, however, didn’t pose as much of a challenge to Illinois, but that didn’t mean the Illini would take their opponent lightly.

“I know Rutgers has struggled in the Big Ten, but that really doesn’t matter because we always go out there and respect our opponents,” said middle blocker Ali Bastianelli. “No matter who it is on the other side, we want to go out there and dominate. Tonight, we just really came out with a lot of fire.”

Illinois’ decimation of Rutgers started with a 15-0 run in the first set that brought the score to 17-2. Outside hitter Jocelynn Birks said the key during that run and the entire match was to avoid getting comfortable with the leadJT.

Illinois would go on to win the set 25-8JT, and kept the pressure going into the second set. The team opened up a 6-0 lead to start the set, and wasn’t tested on its way to a 25-12 set victoryJT.

Head coach Kevin Hambly said his team’s passing was strong throughout the match, which made it easier to get the middle blockers involved in the action. The team recorded a .384 hit percentage in the first two sets while committing only four errors.

“We got our middles involved a lot,” Bastianelli said. “Jordyn (Poulter) did a great job of setting and connecting with all the hitters. I think we all did a really good job. We got Jordyn the ball and put her in good positions.”

Middle blockers Katie Stadick and Bastianelli contributed nine and seven kills, respectively, which was second and third most behind Birks’ 10 kills in the matchJT.

The Illini hit their only snag of the match in the third set. Rutgers held its own against Illinois, gaining an 8-5 lead early on. But with the score tied at 10, Illinois retook the momentum and limited the Scarlet Knights to just six points the rest of the way.

“Defensively at the beginning of that third set, I’m not sure that we gave the effort that we needed to give,” Hambly said. “I thought we were counting on just scoring points, and we weren’t going out to hurt them … We thought that they might go away, and that wasn’t going to happen.”

Despite the dominant win, Hambly remained realistic about the situation, since Rutgers currently sits in last place in the Big Ten. He said the team will move on from this game just like it does any match, and set its sights toward a home rematch against Wisconsin Wednesday.

“Rutgers has one win in conference, so I don’t know if this is going to build our confidence,” Hambly said. “We got to work on somethings and try some things and that helps. We are ready to let go of this and get back to work.”