Illini football’s Desmond Cain steps up in midst of injuries 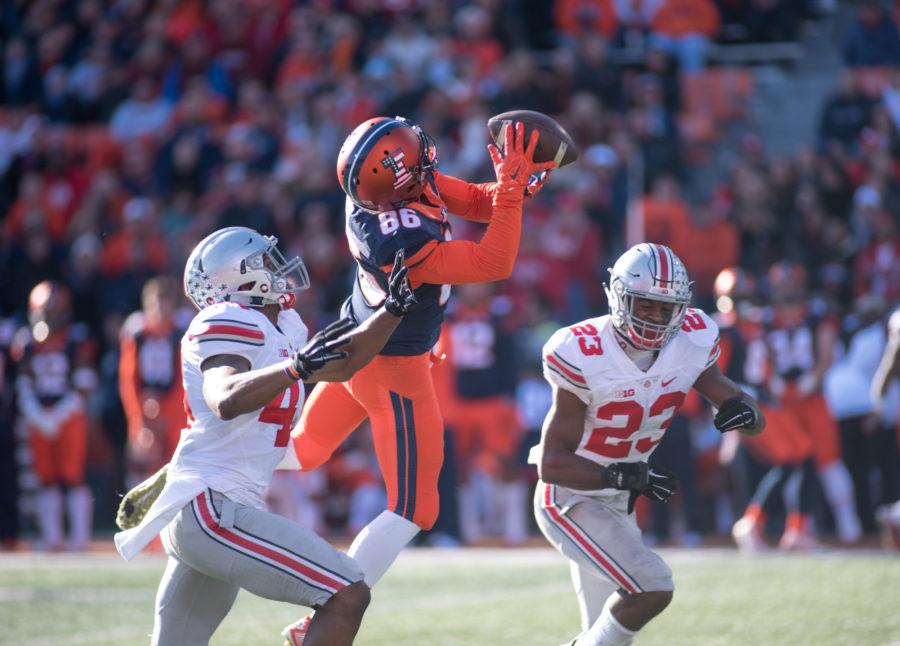 Illinois football will host seven home games in the fall

Geronimo Allison has been relatively quiet the past few games as opposing teams have increased coverage on the senior wide receiver in an effort to silence him.

Allison is just 206 yards short of a 1,000-yard season. But he hasn’t had more than 40 yards receiving since the Wisconsin game, when he caught eight passes for 99 yards. Against Ohio State, Allison had just one catch for 38 yards.

Illinois has been short staffed with the injuries. In the beginning of the year, Allison picked up a lot of the work. Recently, it’s been a different wideout — Desmond Cain.

Cain had a career day against the Buckeyes, leading the receiving corps with 10 catches for 102 yards, causing quarterback Wes Lunt to reminisce about a former Illini freshman.

“The difference between those two is that Mikey (Dudek) came in and had immediate success,” Lunt said. “Des really has worked for everything he’s gotten. He’s continued to progress game by game … Having both of those guys next year in the slot will be pretty nice cause they’re both different players. Mikey has more top-end speed. Des has quick twitch speed and just has a knack for catching the ball.”

There’s been miscommunication between Lunt and his receivers throughout parts of the season. But head coach Bill Cubit and other players are confident that Cain’s attitude can benefit the Illini.

“You could just tell he was going to be a good player because of his attitude,” Cubit said.

Cubit told the media at his usual Monday press conference that the injury report is “pretty extensive, as you can imagine.”

He joked that the report is two pages long.

During the Ohio State game, Illinois lost a few players for parts of the game.

Ke’Shawn Vaughn underwent concussion protocol and sat out the second half. Cubit said Vaughn is doing well and will hopefully participate in non-contact drills in Tuesday’s practice.

While Josh Ferguson said he wasn’t tired after returning from injury last week against Purdue, he didn’t play as much in the second half against Ohio State because of fatigue.

Cubit wants both running backs healthy. He said alternate Henry Enyenihi will likely be out against Minnesota, but he hopes to have him back against Northwestern.

Cubit said the team feeds off Ferguson’s energy, but having a healthy Vaughn is necessary to making sure Ferguson can perform at his top level.

The Minnesota Gophers are on a four-game losing streak, which includes three top-25 teams. The Gophers’ most recent loss was a 40-35 defeat to No. 6 Iowa.

But Illinois is not focused on past opponents. Lunt said that Saturdays have been crazy for the entire conference and that one week doesn’t always indicate what will happen in the next.

“They’re still fighting for a bowl just like we are and that’s just something that will probably add a little to the game,” Lunt said.