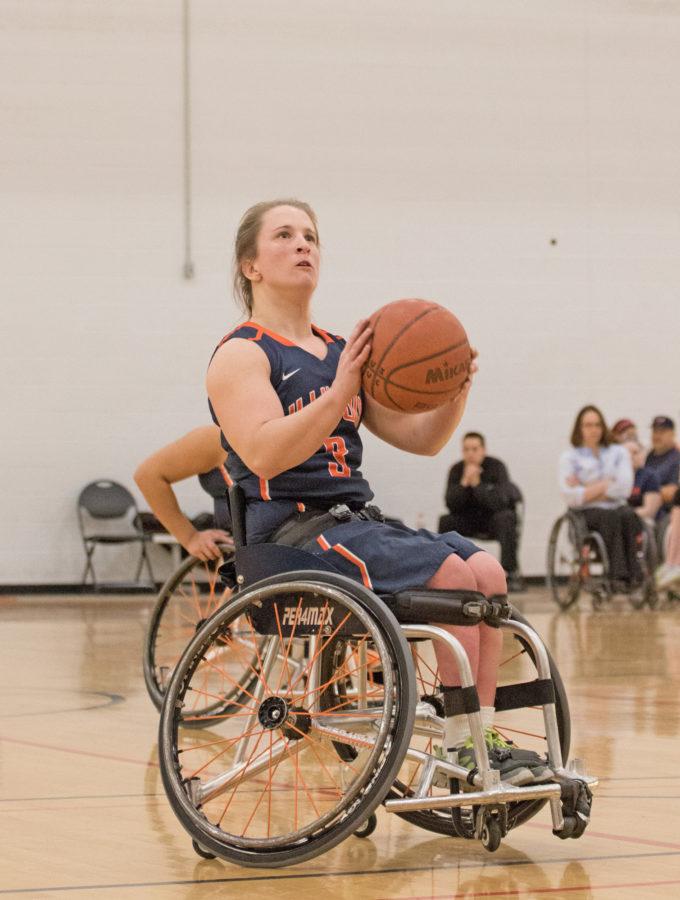 After two weeks off, both the men and women’s wheelchair basketball teams will make their annual trip to Wisconsin-Whitewater for a tournament.SO

Whitewater’s tournament is one that the Illini always like to play in, and features some of the country’s top collegiate competition. Teams participating this year include the defending men’s — Whitewater — and women’s — Alabama — national champions.SO

For the women’s team, it will be its first college tournament of the season. The men’s first tournament — the Southwest Minnesota State tournament — came at the beginning of the year.SO

Although both the men and women’s team went winless in their last tournament, they aren’t hanging their heads.

“We have a team that trusts each other,” head women’s coach Stephanie Wheeler said. “That is huge for us. It’s obviously still developing but even when we make mistakes we know another teammate is going to fix it.”

The women’s team has relied heavily on Gail Gaeng for offensive production. She leads the team in points, rebounds and assists.SO

Wheeler said if the team wants to succeed, it will need to put in a stronger effort on offense.

“Gail has been great,” Wheeler said. “But we can’t rely on her to carry the offense every game. We need Kendra (Zeman) to have a big weekend, as well as Megan Blunk. When other teams take away Gail they are two of the girls we really need to step up.”

The men’s team is looking for a bounce back performance after the tough last weekend. One boost is that its head coach, Matt Buchi, is returning from kidney surgery and a week of coaching Team USA in Japan. Derek Hoot — one the Illini’s biggest contributors — played for Team USA.SO

“It will be nice for them to get back to the system before we leave for Wisconsin,” Kate Rougeau said.

Rougeau said the men’s team will look to keep up its solid effort on the defensive side of the ball. But she said offense has been a bit of a different story.

“It’s a bit of a work in progress,” Rougeau said. “We’ve played great defense together but the offense is something we’re going to have to continue to work on as a team.”

Ryan Neiswender leads the Illini in scoring, followed by Mak Nong.SO Though Neiswender and Nong have been solid, Rougeau said Illinois needs to run a more team-oriented offense.

“Spencer (Heslop) is one guy I think could really put up some points this weekend,” Rougeau said. “He’s looked really good in practice all week and with his confidence right now I think we’ll see a lot from him.”

Both Illini teams will be playing through a tough time. Timothy Nugent, founder of Illinois’ wheelchair basketball program — passed away on Nov. 11.SO

“We’ll be playing through his funeral this weekend,” Rougeau said. It’s going to be very difficult but we believe it is what he would want us to do. It is a huge loss to our program and to wheelchair basketball, but he’s given us so much and we are thankful for the opportunity to play this weekend.”