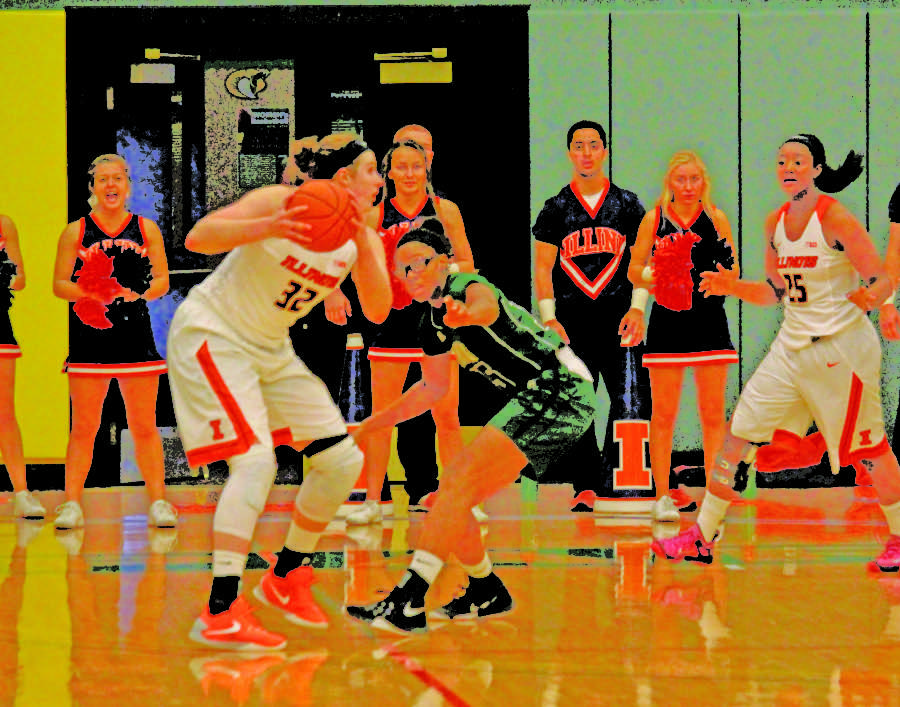 Chat rice White shields the ball from a defender during Sunday's game against Ohio University at Parkland College. Illinois won 62-53..

When Ohio University got off to a 7-0 lead over Illinois to start its Sunday gamelb, Illini head coach Matt Bollant knew he needed to make an adjustment.

Bollant implemented a zone defense late in the first quarter against the Bobcats in hopes of pushing the tempo and forcing them into bad shots. In the eyes of star center sophomore Chatrice Whitelb, the switch was everything.

Bollant thought his players did a good job of zeroing in on Ohio’s best player, Kiyanna Blacklb, and preventing the Bobcats from getting into a rhythm.

Bollant felt like the switch was just what his team needed to get over the hump.

“We were having trouble guarding off the dribble, and I think we were a little tentative, and I just felt like ‘let’s try to stop their penetration first,’” Bollant said. “Certainly that made a difference.”

On paper, it seemed as if Illinois’ faceoff against Ohio was going to be a walk in the park, but the team soon realized it was wrong.

Bollant noted the Bobcats got going right away and were quicker off the dribble than the Illini expected — Ohio shot 50 percent from the field in the first quarter and held a 12-point lead at the end of the period. Nevertheless, Bollant felt that overcoming a deficit like that to win a game — the Illini eventually won by a score of 62-53 — can be a positive early on in the season.

“I think any time as a coach when you have close-game situations, when you win them, you feel like you learn,” Bollant said. “We did a good job executing the side-inbound, we got to the rim, and I felt like our leadership today … Kennedy (Cattenhead)lb got us going in the second quarter, and then Kyley (Simmons)lb and Chatrice (White)lb in the second half, which is great, and you want your returning players to make plays.”

Ohio’s play exposed Illinois’ weaknesses, and showed Bollant what needs to be shored up in the coming days of practice. The Bobcats made him aware that his team needs to improve in man-to-man defense.

Bollant calmed his players after facing a 12-point first quarter deficit and told them to let the offense come to them as oppose to forcing the issue. He wanted his players to cut down on taking quick shots and urged his team to drive to the basket in order to draw fouls.

His team did just, improving its shot percentage – Illinois shot 50 percent from the field in the second half – and overcoming the margin en route to its win.

“Coach said after the game ‘That just shows how much resiliency we have as a team’ and ‘how we’re not going to give up, just keep fighting through it,’” White said. “For us to come back and pick up after we were down today really showed our character and who we are as a team.”

Bollant was under the impression that his team looked “excited” out of the gates, but liked how the Illini subsequently calmed down in the second half and found a rhythm suitable for success.

“Second half we got more off our type of shot, and it wasn’t quite as fast and more where we were attacking the rim.”