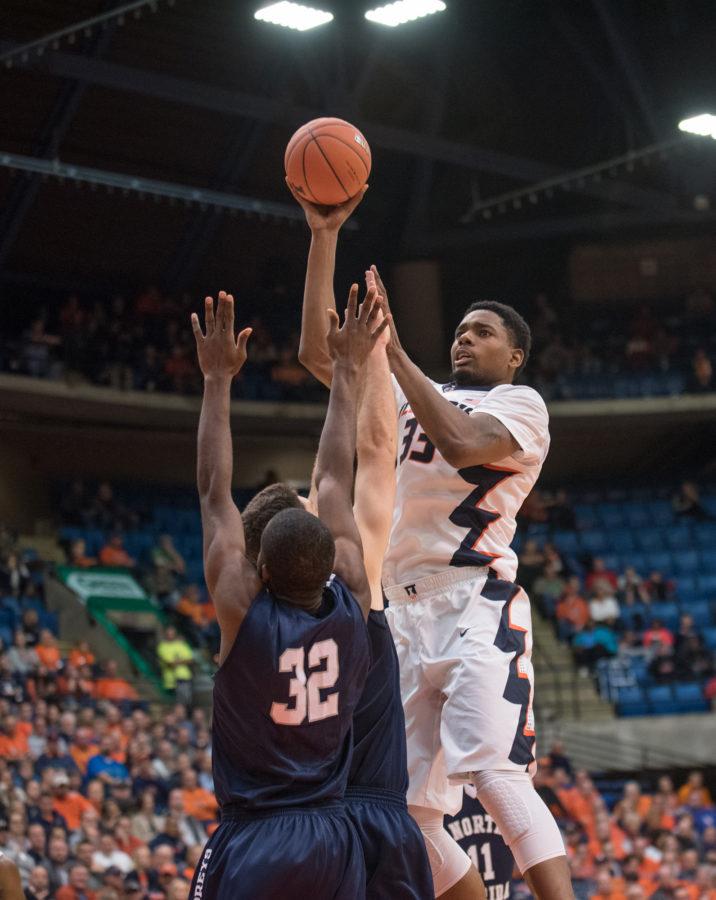 As he sat slumped in his chair during Friday’s postgame press conference, Mike Thorne Jr. answered questions with a despondent crackle in his voice. He looked nothing like the player who had just posted 25 points and 14 rebounds in his debut with his new team.

But the numbers don’t matter to the Illinois men’s basketball team’s new starting center — except for the one that shows up on the left-side of the team’s record. Big Mike just wants to win.

“I’m just very disappointed that we lost the game,” Thorne Jr. said following Illinois’ 93-81 loss to North Florida. “I would have just loved to come out with a win.”

Thorne sat in the same exact chair about a day and a half later, but with more pep in his voice as he responded to questions alongside head coach John Groce. His numbers against North Dakota State — 21 points and eight reboundsMDF — were just as impressive as his debut, but this time was different. This time, Thorne’s individual accomplishments were attached to an 80-74 win.

“I just go out there every game and try to play as hard as I can play,” Thorne Jr. said. “I never really get too caught up in the ‘I’m doing this now, I’m doing that now,’ because it’s a long season.”

For an injury-ravaged Illini team that is desperate for production, Thorne has shouldered the type of load that only his 6-foot-11, 270-pound frame is capable of. Even in just a two-game sample size, Thorne’s per-game stats — 23 points and 11 rebounds on 61.3 percent shooting — have been impressive enough to catapult him to No. 8 in the Big Ten Network’s weekly player rankingsMD.

Groce has recognized the type of dominance Thorne can exhibit and has partially abandoned his pick-and-roll-heavy offensive sets to feed the big man on the block. Through two games, Thorne has accounted for 28.6 percent of Illinois’ points, and 24.2 percent of the team’s shots have come in the form of Thorne’s baby hooks and grown-man finishes at the rim.

At this rate, it won’t be long until opposing teams figure out that one defender isn’t enough to stop Big Mike in the paint. A wide grin grew on Thorne Jr.’s face when asked about the inevitable double-teams that future opponents will throw his way.

“I love Big Mike,” Hill said. “Just because I know him as a person, when I see him get hyped during the game, it hypes all of us up. He just wants the best for the team. He’s not worried about himself at all, which we love about him.”

After two years of practicing against defensive stalwart, Nnnana Egwu, backup big man Maverick Morgan has seemed to benefit from seeing Thorne’s offensive prowess first-hand. Morgan has started the season 8-for-10 from the field — he had 30 total buckets all of last season — and has shown signs of an improved post game, complete with a smooth turnaround hook shot similar to Thorne’s.

“I think us playing against each other, you know, you don’t get better playing against nobodies,” Morgan said. “I think we’re both pretty big-body guys. I’ve learned a ton from him offensively.”

Although Thorne has convincingly exceeded expectations to kick off the season, he remains hard on himself — particularly on the defensive end — and expects more from his game and the Illini moving forward.

“Right now instead of focusing on having a good game or two, I need to focus on how I can get better defensively,” Thorne said. “There’s a lot of things I’m still lacking.”

“I feel like we, as a team, haven’t reached our potential. There’s so much we can get better at.”

With his confidence growing and the NCAA tournament on his mind, Big Mike could prove to be a thorn in opposing big men’s sides all season.