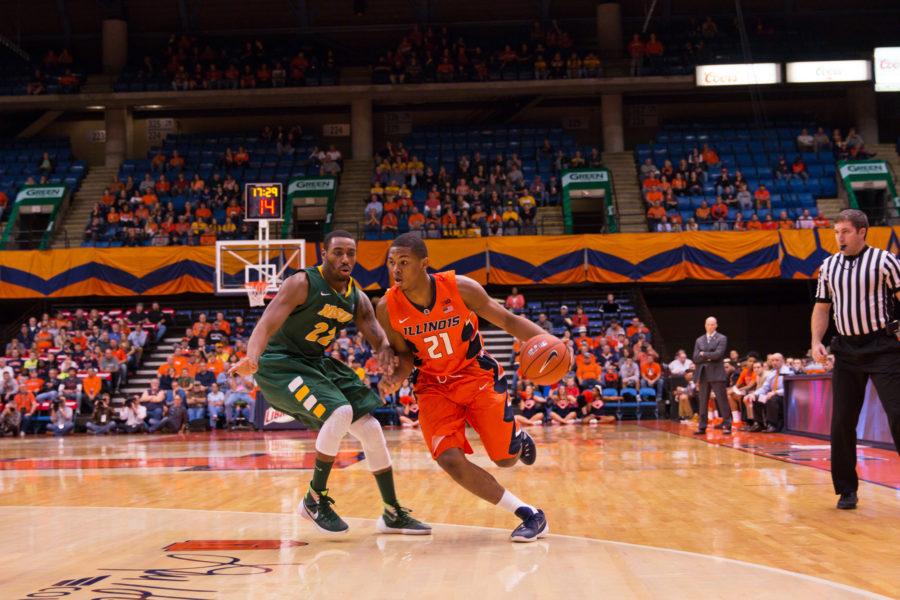 Illinois’ Malcolm Hill (21) dribbles around his defender during the game against North Dakota State at the Prairie Capital Convention Center in Springfield, Illinois, on Sunday, November 15, 2015. The Illini won 80-74.

With his Providence team up nine points on Harvard with 4:30 remaining, Kris Dunn held the ball six feet beyond the 3-point arc. He dribbled twice and used a ball-screen to get past his main defender, a third dribble to size the next man up, and a final step-back, through-the-legs dribble, to get wide open for a mid-range dagger.

The Crimson wouldn’t come within single digits of the Friars again.

Illinois basketball (1-1) will try to slow Dunn down in a matchup at Providence (1-0) Wednesday night at 7 p.m. Do-it-all junior Malcolm Hill will likely be the Illini player tasked with guarding Dunn for most of the game.

Dunn might be getting Dwyane Wade or John Wall comparisons if he played for a Duke, Kentucky or Kansas. The 6-foot-4 senior posted 32 points, eight steals, six rebounds and five assists against Harvard on Saturday night. He has handles, bounce and long arms that can disrupt passing lanes and climb the ladder for offensive rebounds.

The Illini will rely heavily on Hill to counteract Dunn’s offensive process. Hill is averaging 16.5 points, seven rebounds and five assists through two games, and he sat out seven combined minutes against North Florida and North Dakota State.The one hiccup in Hill’s game so far has been efficiency — he’s shooting 31 percent from the field. But he’s confident he’ll bounce back Wednesday.

“I’m just not thinking about it too much. Just (going to) keep playing the same,” Hill said. “I just happened to have my slump at the beginning of the season, but I’m not really too concerned about it right now.”

Head coach John Groce said he isn’t worried about his star guard’s 9-for-29 start, either.

“Hill’s leadership is terrific,” Groce said. “Things didn’t go necessarily, from an efficiency standpoint, well in for Hill in Friday night’s game and (Sunday) of what we’re accustomed to. He’s too good of a player — he’ll be fine there.”It’s a good bet the Illini will again lean on center Mike Thorne Jr. for early and often touches around the basket. The 6-foot-11 graduate transfer from North Carolina-Charlotte played a major role in Illinois’ 80-74 comeback win against North Dakota State on Sunday.Unlike the season opener versus North Florida, Illinois showed resolve against North Dakota State. The Illini will look to carry that same fight against the Friars.

“We could’ve easily said, just like Friday, ‘let’s just lay down like a dead fish and give up,’” Thorne Jr. said. “But (our) guys didn’t, and obviously I came in and made a few plays, and I was just proud that I got a team that is gonna fight.”

Hill said he told the team’s young players about the importance of road victories.

“It’s basically us against the world — that’s what it’s gonna be like,” Hill said. “I told them getting a road win is one of the best feelings in the world, so I told them to be ready.”