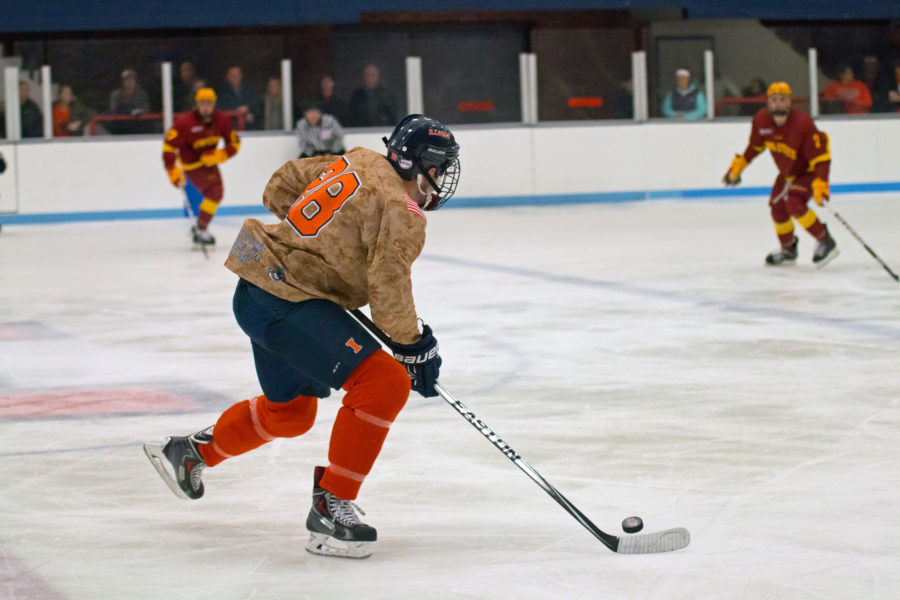 Aaron Dusek carries the puck up the ice during the game at the Ice Arena against Iowa State on Friday, November 13. Illinois won 4-3 in a shootout.

A lot of athletes have some sort of pregame ritual that gets them focused and relaxed before a game. LeBron James will sit down and read a book in the locker room. Kevin Garnett bangs his head against the basket stanchion a few times.

For a couple of Illinois hockey players, a nice cup of joe does just fine.

On gamedays in between off-ice warm ups and on-ice warm ups, eight members of the team will take a coffee break to unwind and talk about life.

Defenseman Aaron Dusek is the founder and leader of the “prestigious” club, which he simply titled, The Coffee Club.

“I actually started a coffee club when I was playing junior hockey,” Dusek said. “I really liked doing it, so when I came to the University, I started it up again.”

While their teammates get pumped up and ready to go in the locker room, the coffee club convenes in the stands. Conversation range from how everybody’s day went, to game tactics. There are no limits to the Coffee Club. They will talk about anything.

“We are there to just chit chat and drink coffee,” Cruickshank said. “Sometimes (O’Brien) will share some funny stories from his playing days at Notre Dame. It’s just a fun thing to do so we aren’t psyching ourselves out before a game.”

Leading the Coffee Club is not an easy task. Dusek, who is considered the “captain” of the club, found the need to delegate some of the responsibilities, so he named Cruickshank and Mcging alternate captains.

The Coffee Club is an established presence at the Illinois Ice Arena. The players even have a deal set up there — the concession stand always has a nice hot pot prepared for the players.

Even on the road, Dusek and company continue the tradition. The road trips for the Coffee Club do not run as smoothly as their home stands. One time, the concession stand at the opponent’s rink did not have coffee. The Coffee Club avoided catastrophe by sending an inactive player to the coffee shop down the street.

There are a couple requirements to join the Coffee Club.

The second requirement makes a few players unqualified. For instance, forward Chris Lozinak drinks a cup of coffee prior to the team that the Coffee Club meets as part of his own ritual.

The team — including head coach Nick Fabbrini — does not mind the Coffee Club.

“Everybody has their own way of preparing for the game,” Cruickshank said. “We do it to relax and keep our minds clear before a game. Some of us like to stay loose and others like to stay serious.”

While there are not many requirements to join the Coffee Club, there was a time Dusek considered a stricter entry process.

“James Mcging drinks his coffee with skim milk and zero calorie sweetener,” Dusek said. “It is honestly embarrassing. We have contemplated kicking him out before for that, but we just let it slide.”