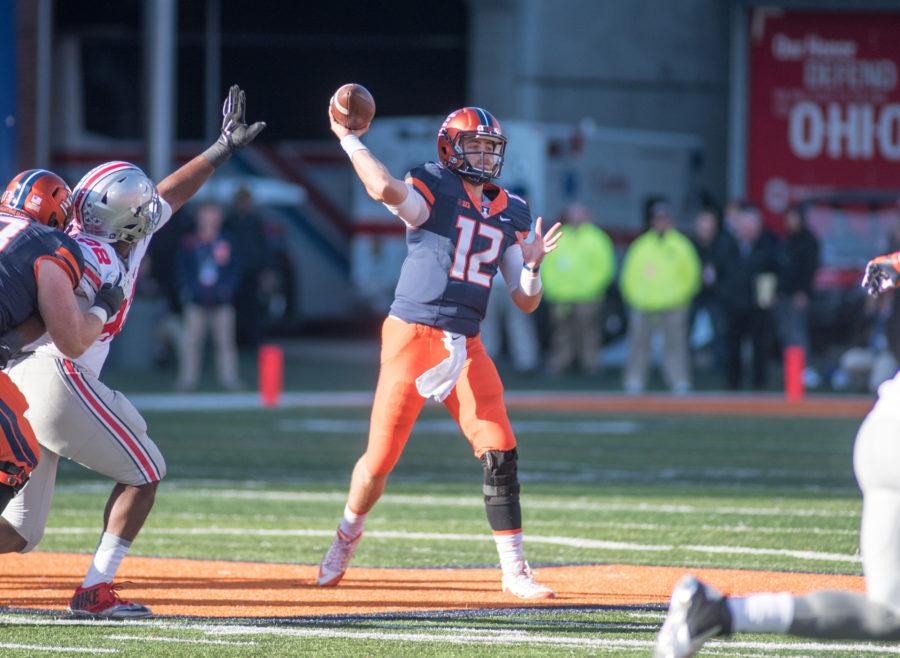 On a cold, rainy Monday in November, Wes Lunt was where he usually is on a Monday afternoon: sitting in a chair in the Memorial Stadium press box.

It’s part of the Illinois quarterback’s weekly routine: meet with media members after head coach Bill Cubit concludes his press conference. He stares out toward the east when he answers questions, staring at the background of treetops poking up above University buildings and Urbana homes under the cloudy skies.

When he’s searching for the right words to answer to a question, he looks down.

He answers questions about the Illini’s 28-3 loss to Ohio State on Saturday, reiterating that the team only needs to win one of its two remaining games to become bowl eligible, which has been a team goal all season.

The leader of the offense might not look forward to the media availability, but he’d rather be in the chair than not there at all. At this point of the season last year, Reilly O’Toole replaced Lunt as the starting quarterback and it was O’Toole who attended the Monday press availability.

Now, Lunt is back sitting in the chair answering questions and behind center leading the Illinois offense. He’s faced plenty of obstacles during his career at Illinois, but he’s handled the criticism that comes with the position and has tried to make his players perform to the best of their abilities.

“Nobody really understands what this guy does for us,” Cubit said. “We play to his ability and he handles the game well.”

Lunt was expected to finally reach his potential this season. He battled injuries for much of his sophomore season and ultimately lost the starting position when his ailments prevented him from performing well enough for a team seeking bowl eligibility. After an offseason of recovery, Lunt was healthy.

The problem — a main storyline of this season — was that the rest of his teammates haven’t been healthy. Sophomore All-American receiver Mike Dudek tore his ACL in the spring and senior wideout Justin Hardee broke his foot during the summer. Freshman running back Dre Brown tore his ACL during the spring and other key players like running back Josh Ferguson, Tyler White and Tim Cleary have battled injuries for much of the season.

Illinois’ injuries forced Cubit to dial down the offensive gameplan to its bare bones.

When asked if the injuries put a ceiling on the offense’s potential, the quarterback had to think before he answered.

“Maybe,” Lunt said. “We maybe thought we’re going to get both of those guys (Dudek and Hardee) back, so we kind of just played it out throughout the year, now we know we’re not getting them back, but that’s football. You have to play with the guys you have.”

The receivers who have played haven’t helped Lunt move the offense much. Cubit said that his receivers have dropped 49 passes this season, a stat that has hurt Illinois on the scoreboard and Lunt in the scorebook. Lunt has completed 55 percent of his passes — 216 of 393 — and has thrown four interceptions compared to 12 touchdowns. If the receivers had caught all 49 of those dropped passes, Lunt would have a 67.43 completion percentage.

Receivers’ inability to catch the ball and run the right routes have cost Illinois in close games and have marred Lunt’s progress. Geronimo Allison led the Big Ten in receptions and receiving yards for much of the season but defenses have adapted and double-teamed the senior. Freshman Desmond Cain has become a big target in recent games, but Lunt said he doesn’t have a favorite receiver; he just looks for the open guy.

Despite the miscommunication throughout the season, Lunt hasn’t blamed his teammates.

“He’s the guy,” offensive lineman Ted Karras said. “He’s definitely needed to be the big brother to these young wide receivers and running backs and get them how they want. He’s done a good job.”

While it might not be a fun weekly routine, Lunt is happy to be sitting in the chair again. Social-media wise, Lunt is only active on Instagram and doesn’t read articles or other posts because he can’t please everyone. He knows it’s easier to see open receivers from the stands than from behind linemen trying to protect from being sacked.

But he’ll take the criticism, because it’s part of the job. He’s just happy to be back on the chair.

“To finally be able to go out there and go through the ups and downs with the team is why I play the game,” Lunt said. “It’s been a blessing just being able to go as long as I have because I’ve had some bad luck go my way.”