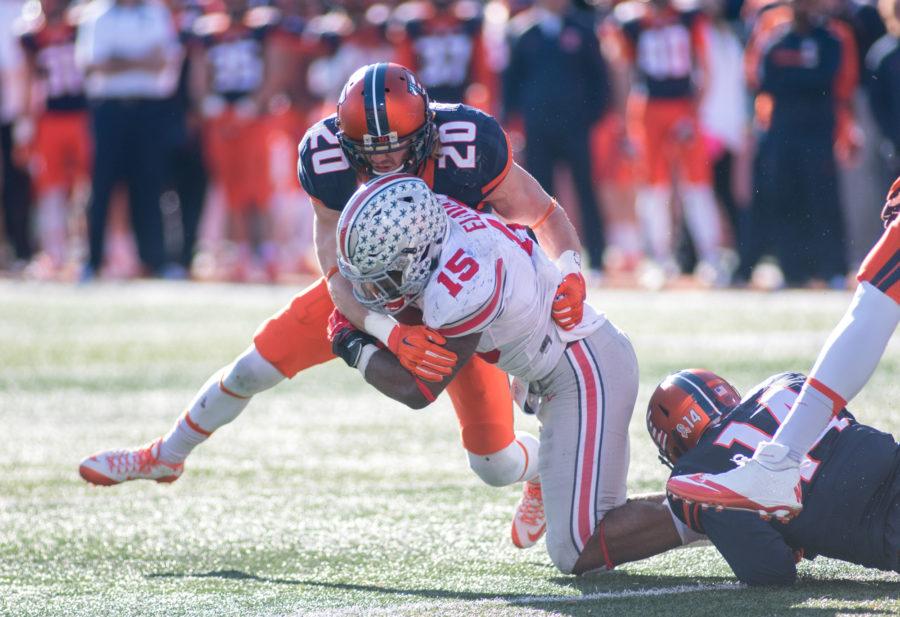 When Josh Ferguson played at Soldier Field his sophomore year, he said he got so excited in the first half, that cramps overtook his body and he needed an IV. By the time the second half came around, he was fine.

With sweat dripping down his face in practice this week, he lauged at that memory, thinking about how he’ll return to that field to face No. 20 Northwestern in just two weeks. Along with the other members in his senior class, he’s taken on a leadership role that has been necessary with this season’s changes.

Two years ago, Illinois had only four wins. Ferguson has grown a lot as a player and so have his classmates. Going into the last two weeks of the regular season, these 21 players are looking to send Illinois to a bowl game — and play an extra 30 days.

When the team found out head coach Tim Beckman had been fired only a week before the season’s start, all the coaches left the team meeting. Seniors Ted Karras, Josh Ferguson and a few other guys stood up to quell fears and issue an open door policy: “If you need anything at all, even if it’s the smallest problem, come to us to talk.”

Senior Clayton Fejedelem saw that as an indicator of the team’s cohesiveness.

“We care so much about each other off the field,” Fejedelem said. “It helps us on the field.”

From leading drills over the summer to coming together when Beckman was fired to Mike Thomas’ departure, this senior class is especially close.

Quarterback Wes Lunt said the younger members of the team want to earn a bowl berth for their seniors who’ve pushed them since the beginning. After the Penn State loss, he said it was the older guys who kept saying that there was a whole season ahead and not to worry.

“When they speak, people listen, and they’ve been really good leaders throughout the year because of that.”

Making a bowl game has been a team goal since the beginning, and now, only one win away from that opportunity, Karras doesn’t want to miss out on a final road trip.

“If we don’t make it to a bowl, it’s kind of like a failed season in a way,” Karras said.

Head coach Bill Cubit makes sure that the seniors are the first in line when the team goes to get food.

“I sit there and admire ‘em, the kids and what they’ve gone through,” Cubit said. “They just keep on plugging. That says a lot about those kids.”

Some have had as many as five different position coaches, and some were a part of a two-win season in 2012.

But most of them aren’t ready for it to end.

“It’s bittersweet,” Fejedelem said. “We get to be here (Memorial Stadium) practicing every day, but never have the opportunity to win here again. I’m not emotional about it now, but I’m sure in time, it’ll catch up with me.

For Karras, the Solider Field game is a culmination of his career. His dad and uncle played for Northwestern. His grandfather played for the Bears. He went to plenty of Bears games there as a kid.

And now Karras will play potentially his last game as an Illini on that field in front of family and friends.