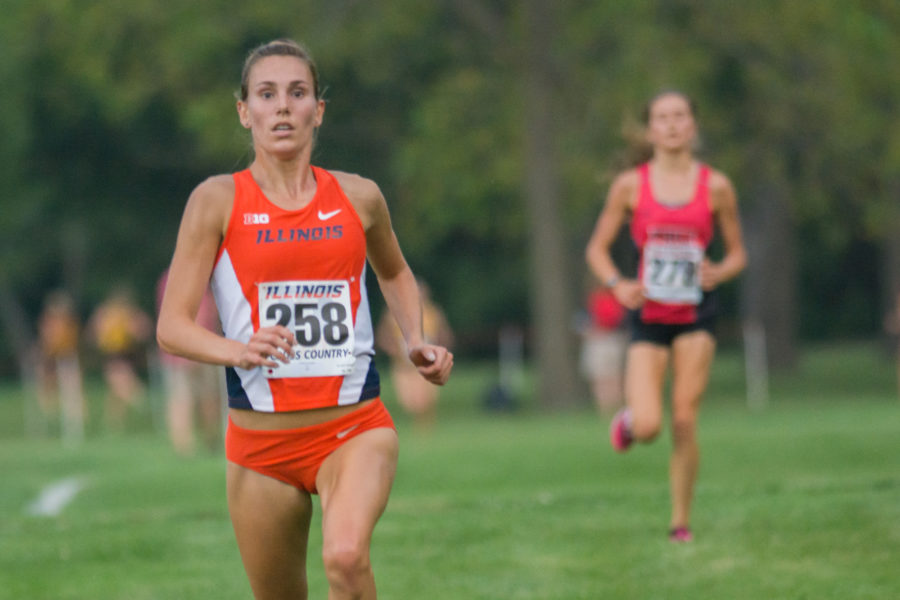 Alyssa Schneider(258) staying ahead of the competition at the Illini Challenge 2015 at the Arboretum on September 4.

Saturday, Illinois women’s cross-country runner Alyssa Schneider will put a close to her cross-country career at the NCAA Championships in Louisville, Kentucky.

Schneider said that she is thankful for the opportunity to have her final race be at the national championships competition.

“I am extremely grateful for everyone who has helped me get to this level in my time here,” Schneider said. “It is great to see it all come together at the end.”

Understanding that many of the best college runners in the country will be at the race, Schneider said she knows she will have to stay focused to continue her recent run of success.

Head coach Scott Jones has kept Schneider from any vigorous or high-intensity activities, hoping to keep her as fresh as possible heading into Saturday. Jones said he knows that Schneider’s experience will help her through the race and give her an advantage over some of the less experienced athletes.

Jones hopes this strategy will not interfere with Schneider’s personal goal for the race.

Arriving at the University of Illinois as a freshman, Schneider’s long-term cross-country goal was to achieve All-American status by the end of her collegiate career. Runners must place within the top 40 at the NCAA Championships race to be granted All-American status.

Schneider competed in the NCAA Championships two years ago, when she finished with a time of 21 minutes and 16 seconds for the 6k course, good for 93rd overall.

“If (Schneider) does what she is capable of, certainly being an All-American is entirely realistic,” Jones said.

This year’s competition will be held at E.P. Tom Sawyer State Park, a course Schneider ran in her sophomore year. The Illini competed at the course earlier this year, but because of a lingering injury, Schneider was held out for precautionary reasons but she knows what type of terrain to expect.

Schneider’s teammates who are able to make the trip down to Louisville will be in attendance to cheer for her on the course.

“It really means so much to me to have that support system backing me up,” Schneider said.

Schneider is confident that she can put forth enough effort to achieve the All-American goal she set for herself as a freshman.

She knows there is the competitive side to qualifying for a national race, but she mentioned that this is a fun week as well because of the support she has been given from her teammates and coach.

“I’m just really enjoying the moment,” Schneider said. “I’m just trying to soak it all in.”