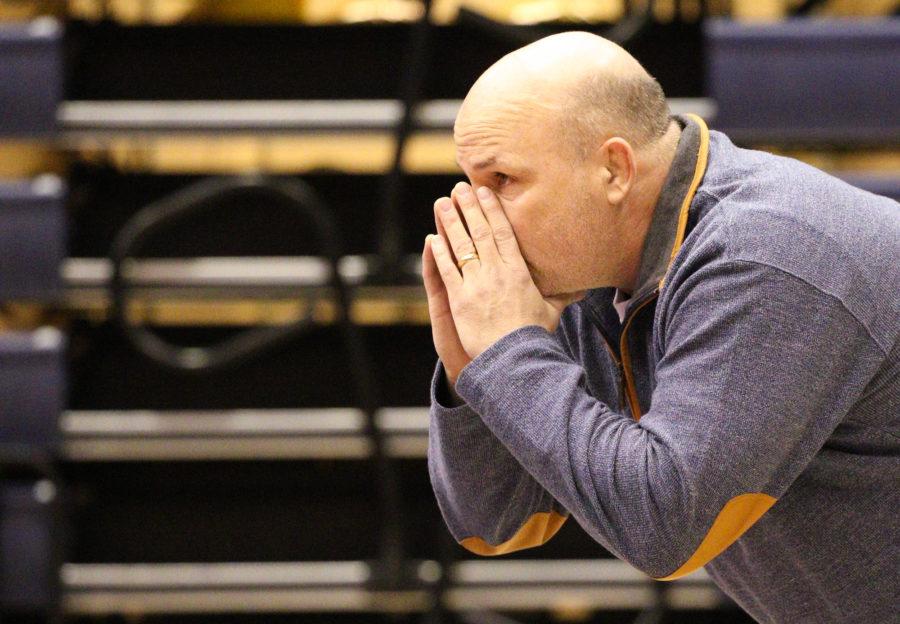 Kevin Vongnaphone The Daily Illini Illinois’ head coach Jim Heffernan makes a call out to the mat during the wrestling match vs. Nebraska at Huff Hall on Friday, Jan. 23, 2015. The Illini lost 22-9

After a week off from competition, the No. 12-ranked Illinois wrestling team dropped one spot to 12th in the Nov. 24 NCAA rankings.

Illinois head coach Jim Heffernan said being inside Madison Square Garden with all of its history is a privilege, but some of his younger wrestlers may not quite recognize that yet.

“We were there a couple of years ago,” Heffernan said. “It’s a great place, tons of history and obviously the national tournament’s there this year and that was part of the reason for going. Just trying to get the “Wow!” factor out of it. Just being in New York City, being in Madison Square Garden, so that’s part of the reasoning we’re going.”

The Illini’s last stop at “The Mecca” was during the 2013-14 season. They went 1-1 on the day, defeating Bloomsburg and falling to Cornell.

The Illini are 5-0 on the season and are coming off of a sweep at the Illini Duals two weeks ago, where they beat Arizona State and Southern Illinois-Edwardsville.

Sophomore Brock Ervin is 4-1 this season in the 141-pound weight class and is unranked, but said that all he is trying to accomplish on Sunday is to wrestle smart and continue the winning streak that the team is on.

“Win as a team and win individually,” Ervin said. “Just go up there and try what we’ve been practicing all week, just what we’ve been learning. I got a couple of guys this week that are ranked fairly high and am looking to take those guys out and hopefully work up the rankings.”

Ervin will wrestle Alfred Bannister of Maryland, Kevin Devoy Jr. of Drexel and Jordan Laster of Princeton. Bannister and Devoy Jr. have a combined record of 7-2, while Laster hasn’t competed yet.

For No. 6-ranked, 133-pound Zane Richards, the week off has helped him sharpen some things in his arsenal on the offensive side, but said that he is ready to get back on the mat.

“I’m just looking to go out and kick some ass man,” Richards said. “It’s pretty simple, we’ve worked hard all summer; we’ve worked hard up to this point in the season. I think this is my year, so I’m just going out there and thinking I’m going to mess these dudes up every match.”

Richards will face No. 13 Geoffrey Alexander of Maryland, Franco Ferraina of Drexel and Trey Aslanian of Princeton. Ferraina is the only one who has competed out of the three opponents and has a 0-5 record on the season.

Coming into Sunday, Richards said that he wasn’t sure what all three teams were going to bring to the table. He added that he will wrestle one individual who he saw in high school, but doesn’t think that would factor into anything.