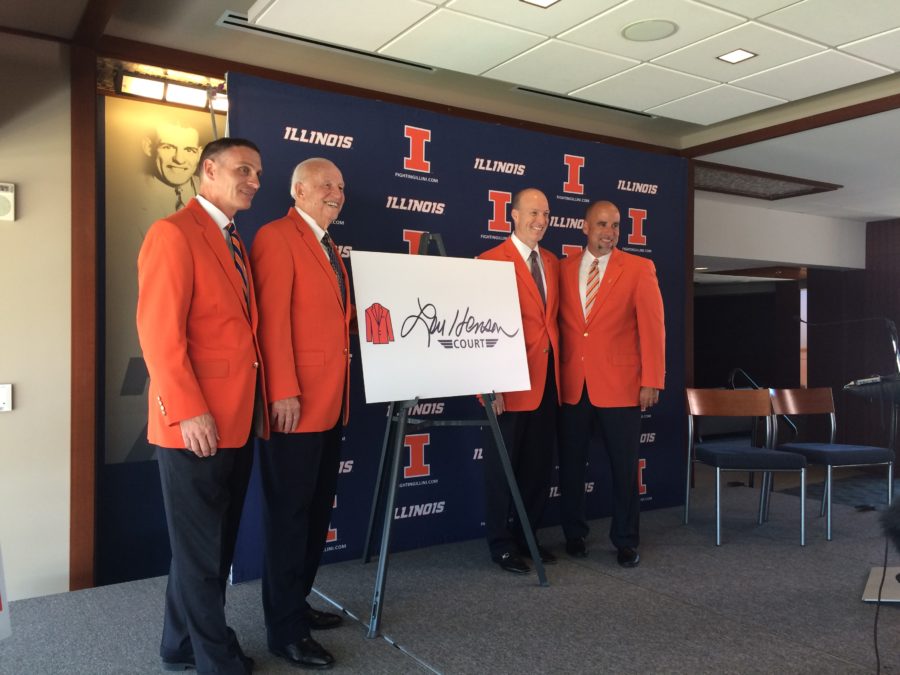 Lou Henson The Coach came before my time.

If you’re reading this as a current member of the Orange Krush, then Lou Henson The Coach was probably before your time, too. Lou coached his last game at Illinois in 1996, when I was two years old. Although I never got to witness his teams play firsthand, it was apparent growing up in Champaign that he was a revered figure in Illini sports.

I got a sense that Lou Henson The Coach was special when his successors — Lon Kruger, Bill Self, Bruce Weber and John Groce — would occasionally wear orange blazers in tribute to Lou’s sideline wardrobe. I could tell he was a beloved figure when he made frequent appearances at Illini sporting events later in his life and was always serenaded by chants of “LOOOUUUUUUU” from adoring fans.

It didn’t matter if Lou was confined to the use of a wheelchair or a walker by one of the numerous health ailments he’s battled over the years; he always smiled and stood up to wave.

It was as I got older and these experiences started to pile up that I realized why everyone loves Lou Henson the Person. I discovered stories about his charity work. His genuine personality. The way he treats everyone — players, fans and anyone who crosses his path — with respect and dignity.

The “Legend of Lou” would seem too good to be true if there weren’t countless examples and individuals that serve as testaments to his character. He never swears. He was the first coach to integrate his team at his first college coaching job at Hardin-Simmons University in 1962. He accepted New Mexico State’s interim head coach position for a salary of $1 in his second stint at the school.

Lou’s had his home in Champaign since his being hired in 1975, and he’s taken on a Mr. Rogers-like aura in the community. Most local Illini fans will have a favorite Lou story if you ask them, as the coach’s impact over parts of four decades has made him seem like everyone’s friendly neighbor.

When the 83-year-old Lou jumped on WDWS’ Saturday Sportstalk radio show with longtime friend and News-Gazette columnist Loren Tate this past July, calls flooded in. Lou was in the midst of his latest health scare, having recently learned he’ll have to receive chemotherapy one week out of every four for the rest of his life to treat a bone marrow condition.

Callers — including one of Lou’s former Illini players — wanted to thank him for all he’d done, whether their experiences with the coach were personal or from afar. The calls were simple but moving tributes.

The tribute to Lou will be much larger on Dec. 2, when the renovated State Farm Center is unveiled and its court is officially dedicated to Henson. His contributions to the program (423 wins in 21 seasons, including a Final Four appearance with the Flyin’ Illini in 1989) have helped make such a state-of-the-art facility for Illinois basketball possible. His creativity and outreach also shaped one of the renovation’s defining features.

If you’re a Krush member reading this from your pregame courtside seat, you’re partially indebted to Lou, too. He founded the Orange Krush in his living room with a handful University of Illinois students before his first season as Illini coach. It’s fitting that the modern Krush, lauded as the nation’s most charitable student section, has grown from the creation of Illinois’ most charitable coach.

Lou’s signature and trademark orange jacket will be painted on the Illinois basketball floor from here on out. He’ll be showered with applause and “LOOOUUUS” when it’s officially unveiled, and it will be an iconic moment in the history of Illinois basketball.

It’s our way of saying thanks, Lou. It’s the least we could do.