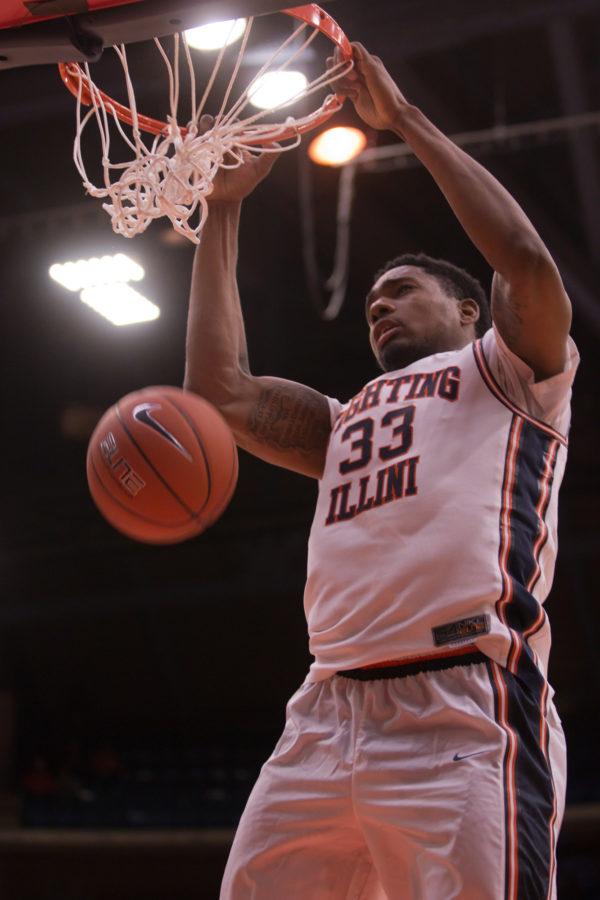 Austin Yattoni The Daily Illini Illinois’ Mike Thorne Jr.(33) dunks the ball during the game against Chattanooga at the Prairie Capital Convention Center in Springfield, Illinois, on Saturday, November 21, 2015. The Illini lost 81-77.

Center Mike Thorne Jr. had surgery on his knee for a torn meniscus Monday and is out indefinitelySO. The graduate transfer from UNC-Charlotte left the game in pain during the first half of Saturday’s matchup with Iowa State after posting 10 points and seven boards in 13 minutes.SO

Thorne Jr. has been a force in the paint through his first seven games at Illinois. The 6-foot-11, 270-pounder was averaging 13.4 points and 8.4 rebounds per game prior to Saturday’s setbackSO. His most dominant performance came in the season opener – he scored 25 points and grabbed 14 rebounds against North Florida on Nov. 13.SO Two days later, he dropped 21 and eight in a win over North Dakota State. Thorne Jr.’s efficiency on the offensive end and physicality on the glass earned him Illini of the Week for Nov. 18.SO

Thorne Jr.’s meniscus tear marks the most recent affliction to Illinois basketball amongst a long list of injuries. Jalen Coleman-Lands, Leron Black, Jaylon Tate and Kendrick Nunn have all just returned from their respective injuries.SO Tracy Abrams is out for the year with a torn Achilles tendon.SO

The University wouldn’t comment on if Thorne Jr. would return after some recovery time or if he would miss the remainder of the season.

If Thorne Jr. does not return in 2015-16, he may be able to return to the Illini next season if the NCAA grants him a sixth year of eligibility — he hasn’t played in 30 percent of this season’s games, so he qualifies for an injury redshirt.SO