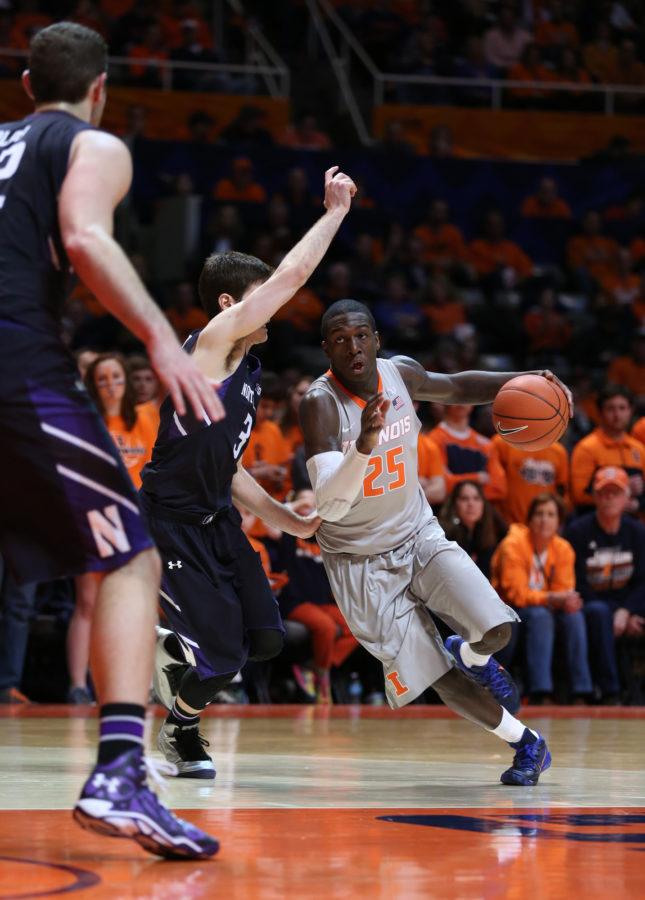 Brenton Tse The Daily Illini Illinois’ Kendrick Nunn (25) looks to drive to the basket during the game against Northwestern at State Farm Center, on Saturday, Feb. 28, 2015. The Illini won 86-60.

Malcolm HillCC intercepted an errant Alabama-Birmingham pass and sped up the floor. As Hill neared mid-court, he threw a bullet to Kendrick NunnCC, who caught the ball outside the three-point line, took one right-handed power dribble and exploded for a lefty dunk.

Not bad for a player five weeks removed from thumb surgery on his shooting hand.

Nunn’s above-the-rim finish accounted for two of his 18 points in a 72-58 win over UAB on Friday nightCC. The 6-foot-3 junior guard showed no signs of rust against the Blazers, shooting 7-of-15 from the field, including 3-of-5 from 3-point range in 31 minutes of playing timeCC.

He followed up that performance with a 19-point outburst versus No. 4-ranked Iowa State in the Emerald Coast Classic Final on Saturday evening, when he again shot 7-of-15CC. Nunn wore a wrap on his shooting hand to quell any lingering pain, but it didn’t seem to affect the team captain’s play whatsoever.

“I was working out a couple days prior to this game and felt good about things,” Nunn told reporters after the UAB game. “I’ve got to get my conditioning up a little more. I felt winded in the first half but felt better as the game went along.”

The native of Chicago’s South Side underwent surgery Oct. 21 to repair a torn ligament in his left thumb, and he was expected to miss approximately eight weeks of actionCC. Instead, he returned three weeks ahead of schedule and starred in this weekend’s games against UAB and Iowa State. He played aggressively and confidently in both games, never hesitating on his release.

Nunn’s improved jump shot will help other areas of his game, because opponents will have to pay more respect to his range. From the triple-threat position, he can use his trusty, left-handed rip-through for easy access into the lane. From there, his crafty ball-handling skills can help create a shot either for himself or a teammate.

In the final minute of the first half against Iowa State, Nunn pushed the ball and settled on the left wing. He crossed over from right to left and took a dribble toward the baseline before being greeted by a second defender.

What Nunn did next is what separates him from many two-guards in the nation. Instead of panicking, he used a step-back hesitation move, which stalled the double-team just long enough for Nunn to turn the corner and reach the basket. A third Cyclone defender challenged him at the rim, but Nunn confused him by switching hands mid-air for a right-handed finger roll.

With 16:45 left in the second half of the same game, Nunn found himself in the same situation – hampered by two defenders on the left baseline. This time, Iowa State’s 6-foot-9 Jameel McKayCC and 6-foot-6 Abdel NaderCC didn’t flinch on the hesitation move. Nunn was quickly running out of floor space, so he kicked a one-handed pass to Hill at the top of the key for a made 3-pointer.

Nunn’s versatility – as a shooter, driver and distributor – is a key element to Illinois’ success. After starting the season with two big games, Nunn’s main focus is consistency.

“A personal goal for me is to stay consistent throughout the season,” Nunn said. “Sometimes, I start the season off kind of slow and then pick it up during Big Ten play, then toward the end of the season it dies down a little bit.”