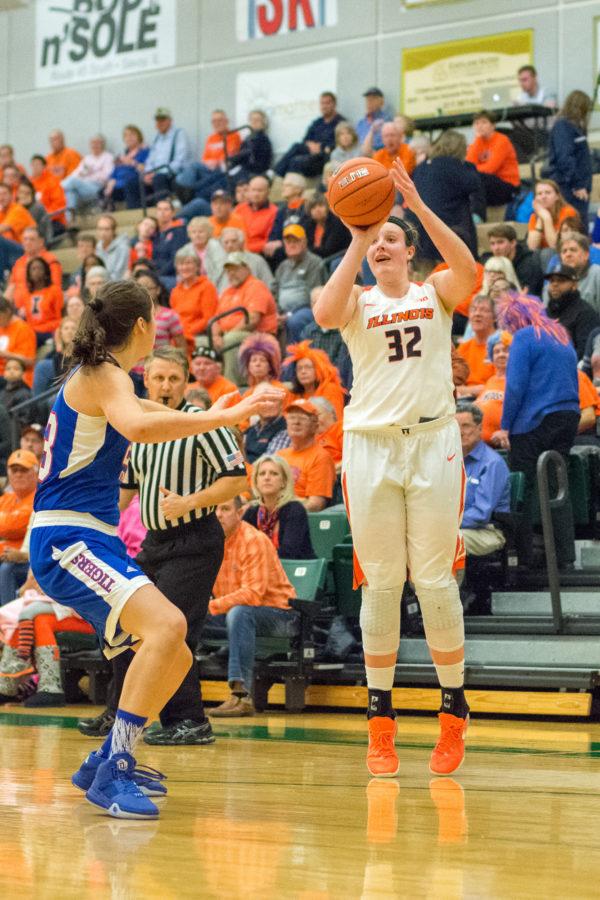 In 2003, the University of Illinois’ in-state tuition was about $5,300, Chief Illiniwek was the University’s active mascot and the Illinois women’s basketball team qualified for the NCAA Tournament.

In-state tuition is now about $12,036, Chief Illiniwek is retired and the Illinois women’s basketball team has made zero appearances in the NCAA Tournament.

In those 12 years, the university has seen changes and the team has struggled. But Illinois might have found its answer in Shelby, Nebraska.

Of the estimated 694 people who inhibit the small town in eastern Nebraska, there might be someone who could lead the team to a tournament bid — Chatrice White.

Although it is highly unlikely she can do anything about tuition rates and Chief Illiniwek, White can help the women’s basketball program.

“No doubt she is much farther ahead,” Bollant said, comparing White at the start of last season to this year. “Last year at this time, she was scoring on the block and that’s really all where she was scoring. Now she is making free throws, driving the ball (and) shooting the three. She’s doing everything else so much better than she did last year at this point.”

At this point a season ago, White was shooting 12-for-26 from the free-throw line. This season, White is 17-for-19 at the line. Last year, White averaged 15.4 points in her first four games. This year, she is averaging 20.3 points per game in the four games.

Twenty-five players have scored over 1,000 points in their Illini careers — two have scored over 2,000 points. If White continues at this pace, she will finish this season with 589 points, giving her 1,037 thus far in her two-years at Illinois.

Even with all of the hype surrounding her, White remains humble.

“I didn’t know that,” White said about the potential of scoring 1,000 career points after this season. “That’s pretty cool, but if I get that this year, that would be pretty sweet, I think.”

Instead of focusing on her personal achievements, White gives credit to her guards for feeding her the rock in the post.

White could have gone just about anywhere in the country to play college basketball. A McDonald’s All-American, she had about 60 Division-I offers. Notre Dame, Stanford, Oklahoma State and many Big Ten teams — including Nebraska — were among some of the schools to give her an offer.

In the mix of those schools was Illinois. Bollant started recruiting White when she was in eighth grade. He remembers making about five or six trips a year to see her play and attended all of White’s summer games. Fortunately for Bollant, the eight-hour car rides paid off.

White said she knew she belonged at Illinois because of the staff, professors, advisors, and the overall people associated with the university. And even after the circumstances surrounding last season, White said she has no regrets.

With White onboard, Illinois has a chance to end its 12-year tournament drought. But White is taking it one step a time.