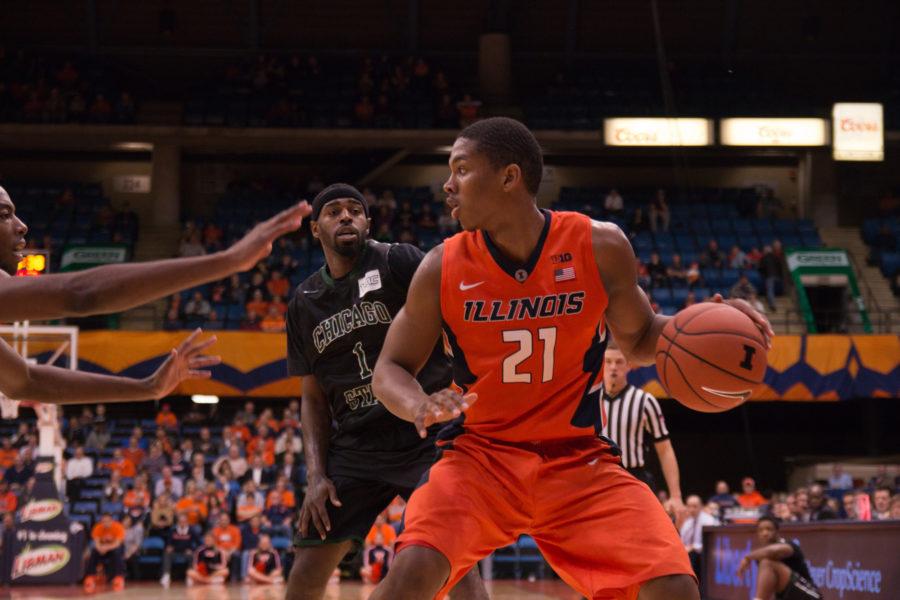 Illinois’ Malcolm Hill(21) looks to pass the ball during the game against Chicago State at the Prairie Capital Convention Center in Springfield, Illinois, on Monday, November 23, 2015. The Illini won 82-79.

The 2015-16 Illinois basketball season has been injury-filled early on, but Illini fans have reason to rejoice: the newly renovated State Farm Center is finally ready for action.

After playing their first four home games in Springfield, IllinoisRB, the Illini (3-4)RB return to Champaign to face the Irish (4-2)RB on WednesdayRB. The first 6,000 fans to enter the State Farm Center will receive a scratch-off ticket, and 1,500 winners will receive a mini replica Lou Henson CourtRB.

Forward Leron Black, point guard Jaylon Tate and shooting guard Kendrick Nunn all recently returned to the floor. However, the Illini will be without starting center Mike Thorne Jr. against the IrishRB.

Thorne Jr. suffered a torn meniscus in Illinois’ loss to No. 5 Iowa State on Saturday. He underwent surgery Monday and is out indefinitely according to head coach John Groce.

“It’s hard to replace a guy with one player of Mike’s ability and size. There’s not a lot of 6-foot-11, 270-pound guys walking around campus,” Groce said. “But we’ve got to turn that somehow into a positive with our style of play, which will eventually evolve and change.”

With Thorne Jr. out of the picture, junior center Maverick Morgan will see increased minutes. The Springboro, Ohio, native is currently averaging 6.4 points per gameRB on a team-high 67.7 percent shooting percentageRB.

Junior Malcolm Hill knows the team needs a significant boost in the rebounding department from players including Morgan, Black and Michael Finke, among others.

“We need someone to make up the rebounding (Thorne) did,” Hill said. “I think people noticed that in the second half against Iowa State. We had trouble getting defensive rebounds. It’s going to be pretty unique that this year we’re only going to have one game where we’ve had everybody play available.”

Finke said the guards have to pitch in on the glass, as well.

“We were talking to coach (Dustin) Ford the other day and just saying how we might not (always) be the ones getting the rebounds, but we’ve got to box out our guys and make sure the guards are coming in and grabbing them,” Finke said. “So we can at least prevent our guy from getting the rebound.”

Illinois is coming off a 1-1 weekend at the Emerald Coast Classic tournament in Niceville, FloridaRB. Nunn (18 points, five rebounds)RB, Hill (12 points, six assists, four steals)RB and Black (12 points, six rebounds)RB led the Illini to a 72-58 win over Alabama-Birmingham on FridayRB. One day later, Illinois fell 84-73 to Iowa State in the championship despite a 20-point, five-rebound effort from HillRB.

Groce pointed to Jackson and forward Zach Auguste as players to watch for.

“Jackson is the head of the snake if you will,” Groce said. “They’ve got shooters around him. Auguste is a load inside. He can rebound, he’s a double-double guy. He can pass. I love his athleticism and his mobility.”

“When they played Alabama, one thing I noticed is that Demetrius, he plays really hard, he likes to get up (in your face), and he can be really disruptive on the defensive end,” Hill said. “He kind of reminds me of (Providence’s) Kris Dunn.”