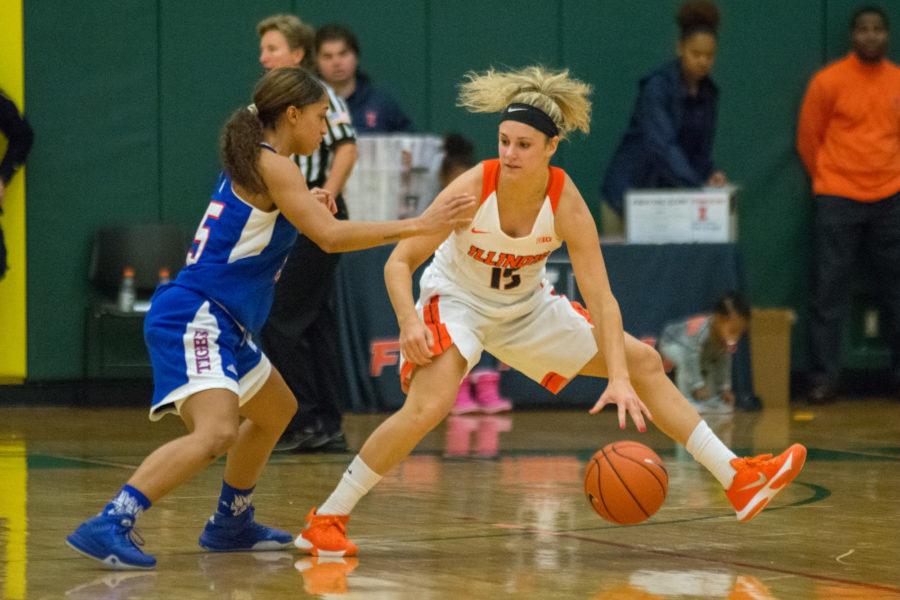 Guard Kyle Simmons shields the ball from a defender during the game against Tennessee State at Parkland College on Tuesday, Nov. 24. Illinois won 98-43.

Cierra Rice is looking forward to leaving the cold Midwestern weather as she travels to Miami this WednesdayRB. But she’s not going on vacation. She’s looking to take care of business.

Rice and the Illinois women’s basketball team (4-0)RB are heading to South Beach on Wednesday to take on Miami (7-0) in the Big Ten/ACC ChallengeRB. This is the first true road game for the Illini, despite playing all of their home games about five miles away from the State Farm Center at Parkland CollegeRB.

Even though Rice and the Illini spent the summer playing games in FranceRB, Rice anticipates Wednesday’s first road game will be much different.

“Even though we already went to France, that was a while ago and overseas,” Rice said. “This is definitely exciting to finally leave and go play somewhere else and get that experience of playing in someone else’s gym where they will probably have a good crowd.”

But Rice believes offense is not going to be the key to Wednesday’s matchup. Instead, she said defense will be a deciding factor.

Another factor Illinois is anticipating is Miami’s physicality. Miami has six players over 6-feetRB. Illini head coach Matt Bollant said this is something his team will have to be ready for.

“Physically they get after it,” Bollant said about Miami’s players. “They’re long and athletic, their guards go to the boards and they’re just a quick and athletic team. Off the dribble and their offensive rebounding are probably their two best things.”

Illinois should be rested up for the physical toll they will face against Miami after having more than a week off of games. After last Tuesday’s game against Tennessee State, the Illini had Wednesday, Thursday and Friday off before practicing Saturday night.

Bollant, however, would have preferred to be playing games during that time. Illinois was originally supposed to play on Friday night, but the game was dropped last minute, Bollant said.

“I think it’s better to play games to stay sharp than it is to be off,” Bollant said. “But I’m hoping for in January, February this might help us then more than now. If I was just going to prepare for Miami I would have rather played Friday or Saturday.”

After traveling to Miami, Illinois will return back to Champaign to host LehighRB. While Champaign can’t offer the warm weather of Miami, it will have the newly renovated State Farm Center ready for action. It will be the first time the Illini play in the State Farm Center this seasonRB.