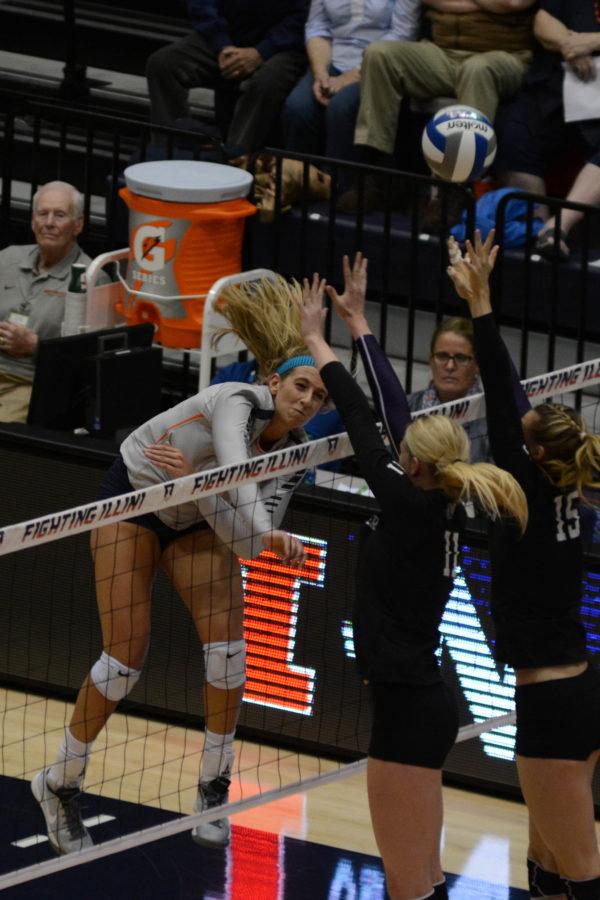 Illinois' Jocelynn Birks (7) attempts to spike the ball during the match against Northwestern at Huff Hall on Saturday, Nov. 7, 2015. Illinois won 3-1.

The Illini volleyball team earned its third-straight trip to the NCAA Tournament and its sixth in seven years with head coach Kevin Hambly at the helm.

Based on records, this year is one of Hambly’s weakest teams, entering the tournament with only 19 wins as opposed to 26 wins in 2014 and 32 in 2011MD. But Hambly said that it is hard to compare this year’s team to his successful teams of the past.

“Every team is different, but this year we are just in a different kind of place,” Hambly said. “This team is every bit as athletic and physical as any other team I’ve had, it’s just they haven’t had the number of wins we usually have going into the tournament.”

Hambly will look to add to his already impressive tournament record, which includes four Sweet 16 appearances and an appearance in the national championship.MD

Senior Jocelynn Birks solidified her spot on the All-Big Ten team for the third-straight year. She ranked fifth in the Big Ten with 389 kills and logged five 20-kill matches this seasonMD.

Two Illini rookies made their way on to the Big Ten All-Freshman Team: middle blocker Ali Bastianelli and setter Jordyn Poulter. The tandem joined five other freshmen on the team. Poulter was just short of 1,000 assists on the season, finishing with 974 on the year. Bastianelli led the conference in blocks at 150, and ranks 21st nationally in the category.

Rounding out the awards was senior Ali Stark, who represents the Illini as the Big Ten Sportsmanship Award Honoree. Stark was one of only two Illinois players to play in all 112 sets this year, Brandi Donnelly being the other.

Last run for seniors, but first chance on the big stage for freshmen

If the Illini lose another game, it will be the last for an Illinois senior class that has been the core of this team over the past few seasons.

Defensive-specialist Julia Conard, back-up setter Alexis Viliunas, Birks and Stark could be playing in their final games of their collegiate careers, while the young talent of the Illini are getting their first shot at the tournament.

Although it is unknown territory for the freshmen, Poulter said the new challenge will not phase them.

“I think when you look at the spot we’re in, we are in a great position to make a deep run,” Poulter said. “We just have to execute and we’ll make it though.”